Is there a way to show the unbend form of sheetmetal when creating a drawing? I've searched everywhere to find an option to insert a view that would allow me to use a different representation as in the part modeling mode, but haven't found it. Please if anyone can help me. Thanks, Jay
Labels:
0 Kudos
Reply
7 REPLIES 7

Jay, One quick workaround is to do a SaveAs version of your model in the Unbend state, and add that model to your drawing. (I'm assuming you are talking about Unbend, as opposed to Flat Pattern. The latter is regularly and easily shown in drawings.) David
0 Kudos
Reply

Make the unbend the last feature in your model tree, and make a family table with the part WITH the unbend feature as an instance (i.e. XXXX-XXXX_UNBEND.PRT), then supress the unbend in the generic. Add both models to your drawing, and use the generic for all your finished part views, and use the instance for the flat pattern. We do it all the time here.
0 Kudos
Reply

Thanks for your help guys!
0 Kudos
Reply

A rather simple function that PTC has had forever, but fails to direct everyone to it is this command EDIT/SETUP/FLAT STATE This will automatically give you the family table with the correct suppressed, unbent, and other features. While in the drawing use the add model to drawing and pick the flat-state instance to add to drawing. Make sure to set flat pattern to current model and place the view.
0 Kudos
Reply

Re: Help with sheetmetal drawing

This is proper solution as you use same part to make drawing so that no problem of mismatch.

Amethyst
(in response to DavidButz)

Re: Help with sheetmetal drawing

I wonder if anyone uses the method of having the master rep be the flat state and adding to the model a pre-defined flexibility with the "flat pattern" feature being the variant.

Upon upon assembling such a component, you are prompted with the variable items dialog box, where you can turn off the "flat pattern" and thus assemble the part in the "formed" condition.

For drawings, the model would have a "Formed" simplified rep in which the feature is excluded.

One problem with using the flexible models is that they are harder to replace.  But on the other hand, you "avoid" family tables.

I don't recommend doing this; I think the proper way is to have the flat-state be a family table instance of the formed generic part.

There are existing toolbar commands that make the process pretty quick: 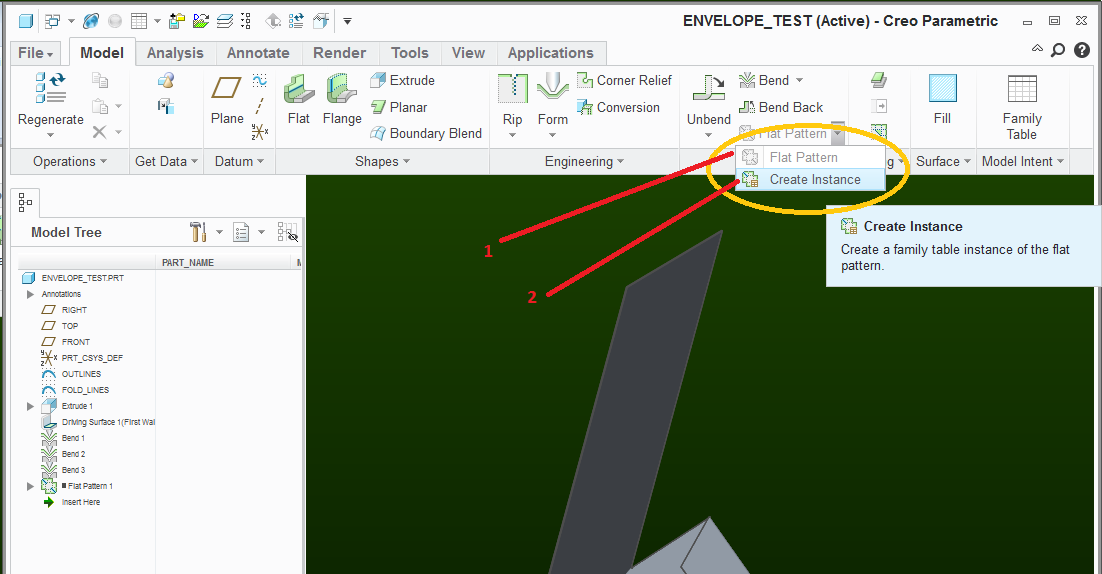