This seems to be a straight forward operation, but it's just not working in WF5. I created an extrusion and round, move copied it, then axis patterned the moved surface. I'm able to merge the extruded rivit with the wheel, but when I try to do an axis pattern of the merge it fails; no matter which object I select first. I've tried patterning individual features and groups, but the merge always fails.

The wheel spoke seen in the images were constructed the same way, and worked without any problem.

Could this be a bug with the software, or am I missing something here? Trying to merge every instences of the pattern is just way too time consuming.

These fail quite often. You have to know what has to be grouped in order to have a complete definition of the feature... and having said that, some features prefer to be excluded from the group. Yep, sometimes it is pure luck. If you have too much trouble, and you have maintenance, you can always put the customer service guys on the job.

gkoch
Newbie
(in response to Nai)

If you create a reference pattern all references of the feature/group which are to the first instance in the referenced pattern, are replaced by the corresponding references in the second instance, and so on.

The two most likely reasons for the pattern to fail are:

1. One or more of the references that are not varied by the pattern do not exist at the place of an instance.

For example: If one half cylinder is selected as reference, the pattern may fail when it gets into the area of the other cylinder half.

2. One reference is "eaten up" by the pattern.

Merges are apt for this, as every merge elimiates the second selected quilt, merging its geometry into the first selected quilt. But also solid features may remove surfaces or edges.

For example: If multiple quilts should be merged to the same surface, it needs to be selected first, or it will no longer exist for the second instance.

The latter is the more difficult case, as it cannot be tested with the original feature. For troubleshooting I normally create a pattern of two and vary the offset or increase the number of instances until it fails, then check what has changed in comparison to the last successful regeneration.

Normally either a reference was lost or the references have changed in a way the feature geometry can no longer be created. No magical mysteries!

For example, if the contour of a flat surface is projected onto a sketch, the sketch will fail for a pattern instance that is rotated to be normal to the surface, as the projection will become a single line (actually multiple overlapping lines).

Nai
Newbie
(in response to gkoch)

I've tried modifying the original patterned cylinder and checking as well as using different references, but no luck.

However, I did find something interesting; when I pattern the features indivdually, the merge pattern is somehow being reference to a different pattern feature earlier in the model (spoke cut-out). This looks like there's something wrong with the software. 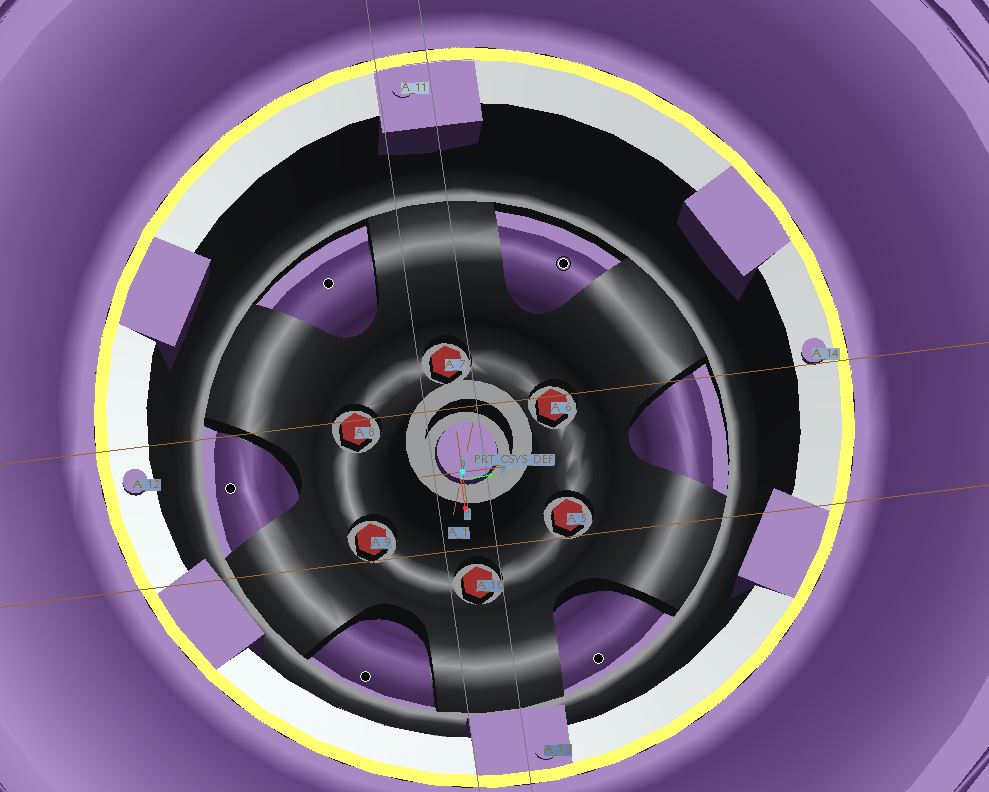 Nai
Newbie
(in response to Nai)

Ok. This is definitely a PTC bug. I reordered the feature just ahead of the other pattern (spoke cut-out) and everything worked as they should. Just frustrates me that they charge so much for a tool that is this unstable.

Oh, I usually figure out the problem before support can get back to me.

I often dump the reference pattern and opt for the axis... this was a great add from PTC.

The other feature of the pattern that helps a lot is using a defined origin.

Gunter; I have once submitted a support case on this and they grouped all but one of the dependent features to make the pattern work. I asked why the last feature was not included in the group. The pattern failed when I included it and I asked why. I never received a reply.

Nai
Newbie
(in response to TomD.inPDX)

I did use axis pattern, but the referenced merge was somehow not referencing the correct pattern. I ended up moving the new pattern feature before the previous pattern feature, and it worked.

Yes, it is difficiult to know exactly how to get a -good- pattern. And in some cases, even scary as it may -look- good but be off by some small error. What good is fewer mouse clicks when you have to redo the feature many times to make it correct? We could really use an "pattern intent" engine to help correct geometry relations to allow logical patterns or even give the "Next Solution" options. This feature is getting stale and needs some new life added to it for the 21st century.

gkoch
Newbie
(in response to Nai)

I doubt that it is a bug (I don't remember seing pattern references being mixed up in 20 years - plenty of other things going wrong with pattern during this time, but not this simple selection mechanism). There is normally a good reason, why such things happen, but it is not always easy to understand at first glance.

We have seen this often enough:

Of course I agree, that it would be nice to implement some means to warn the user of multiple possible ref patterns and explicitly ask, which to follow, but for such a thing to be worth implementing, we probably do not see this happen often enough.

If you really believe it is a bug, open a case with Technical Support. In worst case you will get an explanation of how the other pattern comes into play. Please post the news in this thread then.

Normally it is rather easy to overcome the situation, as you have noticed yourself:

I suspect that due to reordering the pattern, a geometry reference (surface or edge) now has a different parent.

By changing start I mean for example: If you have a pattern of four starting at 0 degree, increment 90, start at -90 instead (or at +90 or +180). This way the pattern leader will no longer interfere with the leader of the other pattern.

Constantin
Contributor
(in response to Nai)

Might sound funny but it worked for me in the past...