anyone has ever tried to perform an analysis reproducing the heating Joule effect with Creo Simulate Thermal?

I need to analyze the behaviour of a grounding device crossed by a given electric current: this current, for Joule effect, progressively heats the material during time until the equilibrium stady state is reached, that is when the temperatures are such that the total thermal Joule effect power (P=I^2*R) is entirely dissipated towards the environment.

I finally need to know the temperature distribution during the steady state.

If the model were simple, a rod for example, I could put an uniformly distributed heat source inside (load/unit volume) and define all the boundary conditions: but the problems are that:

- the model is an assembly -> presence of contact resistances (might the software idealize them as concentrated resistances?)

- the main component of the assembly is quite complex in its geometry (it's a wheel very similar to a car's alloy wheel), so the current does not flow uniformly like in a rod but branches off in its different portions (spokes) according to their respective electrical resistances. --> so I would ideally need the software to distribute the thermal load according to how much current flows where (--> higher the current, higher the joule effect) .

-the schematization of all the resistances of the wheel to perform a circuit analysis would be quite much time consuming.

I know that maybe I am asking to much to the software, but maybe there is a way to simplify the problem too.

I wonder whether something can be done by assuming equivalency of current flow and heat flow... can you first model the current distribution using a thermal analysis (assuming infinite insulation on all surfaces except for the 'terminals')?  That might give some insight as to how the heat source should be distributed.

There was a thread recently about extracting node/element results into Excel... maybe that could be useful too.

thanks for your reply. Concerning the equivalency of current flow and heat flow, I had thought to that kind of analysis you suggested also, but what I realized in this case is that a direct correlation cannot be done for these reasons:

-the joule effect produces a uniformly-distributed heat in the single volumes where the current flows, so every different area of the model should have a heat source (total power / unit volume), and it would not be much the same thing as putting a single point/curve/surface/volume heat source at the terminals.

- Admitted that the previous point could be done (one has only to define as many heat sources as the number of all the single resistance-equivalent volumes of the model) those resistances depend from the geometry (and material) of the single volume where the heat is applied but above all on the local (medium?) temperature in this volume --> it's this last to be the main problem as the heat value would be time-dependent and should therefore be changed automatically with the local temperature during the calculation process...(indeed I just suggested to PTC a new possible function of the simulate...for free!

Indeed that way gives just an insight about the current distribution (but not of the heat!).

And about extracting node element results, you mean it would be useful by doing several analyses and merging then the results?

I admit that my idea was only half-formed!  As you say, it would be a way to visualise (in the first step at least) only the current distribution - but perhaps you may find that the current distribution is reasonably uniform in certain areas, hopefully enough that you could define volume regions and then manually apply a heat load to each one?  This approach might at least give some approximate results.

If the resistance varies significantly with the expected temperature range, of course this means that the analysis would then have to be iterated, assigning a different resistance value to each volume region and repeating both steps each time!

I had no clear ideas about using the element results - just wondered whether some automation might be possible...

Otherwise, you might have to look into using a co-simulation / multi-physics package, I think.

yes in fact at the end I had found that the resistance does not vary significantly (for our purposes) with the temperature, the coefficent of increase of Ohm is reported as 3,8*10^-3 [K^-1]...

I asked you about the excel stuff since it seemed interesting and also because it might be useful for other purposes too.

Anyway at the end I performed a costant heating at an average value...but it would be interesting anyway to have a simulation of currents flow.

346gnu
Garnet
(in response to tleati)

It is heat per unit volume heat load.

Try this for the material properties: 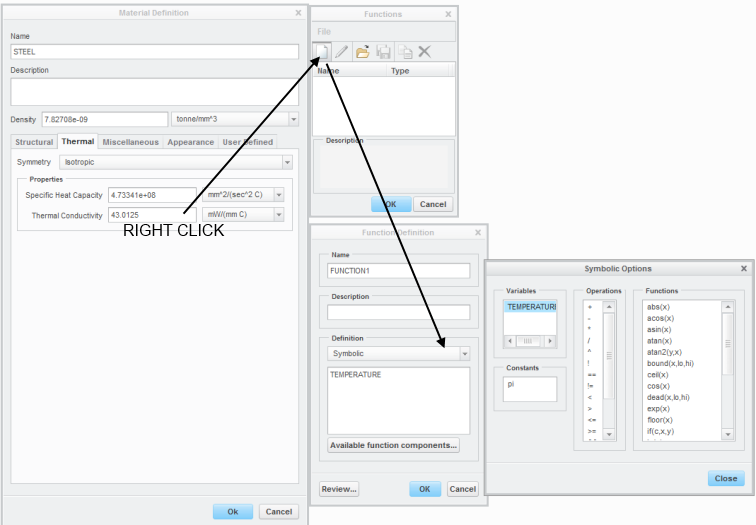 Young's mod, Poisson's ratio, and thermal cond can all be made a function of temperature for either steady state or transient

tleati
Marble
(in response to 346gnu)

yes I was meaning the heat load indeed. Thanks for your other suggestion.