I started trying to learn this program a couple weeks ago and it is the most unintuitive, slow program that I have ever used. It is like an adventure program with no instructions and if you make a mistake, you die and start over. The "Ribbon" interface is stupid. The point of using a pict is to convey a control or operation without words. So they use a pict AND the words to take up more space which requires pull-downs to get at the rest of the commands that did not fit. Above the Ribbon they put more commands that did not fit in the Ribbon. And, of course, they put another set of commands below the Ribbon to take up more screen space.

Save is not Save, it is Save As. It brings up a window for you to accept the name and location for the file. Every other program just saves to the current name and location. Computer crash? Ha! You die and get to start over. If you Save then Exit you get another window telling you any changes will be lost. Sorry, is it too dim to figure out there were no changes? Cancel? It brings up another window to ask if you really want to cancel. Well, no, I just hit the wrong button of course. Why not make the people that hit the Cancel button by mistake suffer instead of everyone else? Help is not Help, it takes you to a forum where you can ask questions. Not that people here are not helpful but when I want Help, I want a description of how to use a tool or command not have the 5 minute argument or the full half hour.

Starting a drawing a part is only "two clicks". Finishing it take a multitude of clicks to get the dimensions to what you want. Draw on the sketch plane and you get a city block when you are drawing a microchip. It decides on its own points of reference for the dimensions and latches on to them like an Acturian Megaleech latches on to its victim before biting his head off and making off with his space ship. Try to zoom in to get a better view and only the geometry zooms, not the dimensions. They are still piled on top of each other.

Try to rotate the part with the middle button and it rotates about some arbitrary axis. The Spin Center does not work, it displays but you cannot do anything with it. Must be some hidden key that activates it. PTC obviously picked up on Microsoft's fondness of animation. No snap to a view, let's slooowly rotate it around for the most dramatic effect. I am suprised the pull-downs do not work in the same manner.

It took a couple days to draw a tail fin. I only had the cross-section on the body centre line and tip. It took that long to figure out how to cut it on the non-orthagonal plane of the body. Tried inserting it to an assembly, four of them in an X configuration. I had to define the angles as 45, 225, 135 and 405 degrees to get them in order clockwise around the body. 405 degrees? What sort of bizzarro universe does PTC work in? You cannot use negative angles but angles greater than 360 work fine.

We only have this program because someone long ago decided on it and the last two people who used regularly have left. Now I know why the mechanical engineer was always pounding on the keyboard and cursing when using this program. Since they are no longer here and any decent CAD program can read files generated by another I am going to suggest they save a boat load of money and dump Creo for a more user friendly CAD program. I personally have AutoCAD R14, AutoCAD 2009, Inventor and Solidworks, all of which are way more productive than this is.

Did you actually have a question?

I will never use Autodesk anything. The one time I was asked to do so I opted for Cadkey. I liked SolidWorks but that world is about to be rocked with 6.0. If nothing else, PTC is consistent. You can decide how to view that consistency.

Obviously, a lot of people feel the same about the ribbon as you. Although limited, it can be customized to work the way you want. I personally like the old interface... but then again, I also like a few of the new features.

But you have certainly pointed out some of the idiosyncrasies regarding Creo. Seriously, how does one really affect these seemingly -basic- oversights? If you want, please feel free to post ideas to correct these things if you have access to that part of the community. Some of the ones you pointed out can be managed in your config settings.

I worked with Solidworks in college, and became pretty proficient with the program. When I put on my big boy pants and started working, I had to convert over to Pro/E. I initially hated the program. Most people describe the program as having a high learning curve (which it absolutely does), but I now prefer to use the term rigid when describing the program. Pro/E is an incredibly powerful tool when you learn how to work with it, as opposed to against it. I have found that there are things that I initially hated, but have grown to love. Resist the urge to compare Pro/E's features with those of other software packages. It is a waste of time and evergy, and gets you nowhere.

Take some deep breaths, purchase a stress ball, and learn (really learn) how to use the program. You may just find that you prefer it over all the others.

... As long as you have overlook the drawings package and the appearance manager

You do not like Autodesk for personal reasons but I have drawn and built real hardware with it. I am not getting paid to fix Creo's interface. I am willing to try a program but not waste time on a program that has a steep learing curve because it is badly written. There may be a great deal that it can do but most of it is useless to me. Shadows, animation, playing tunes is for the marketing people. None of these CAD packages have tolerancing which is needed in the real world. When I bring a drawing into Gibbs CAM for machining, everything is basically 2D. All the fancy rendering is useless. In Gibbs, if I hover over an input or button, a balloon pops up with instructions on what is required or what it does. On Creo, hover over Swept Blend. What do you get? Create a swept blend. That is in case you thought it was going to do a kinematic inversion of the part.

So, why when a part is dimensioned do you get a stupid picture like this? 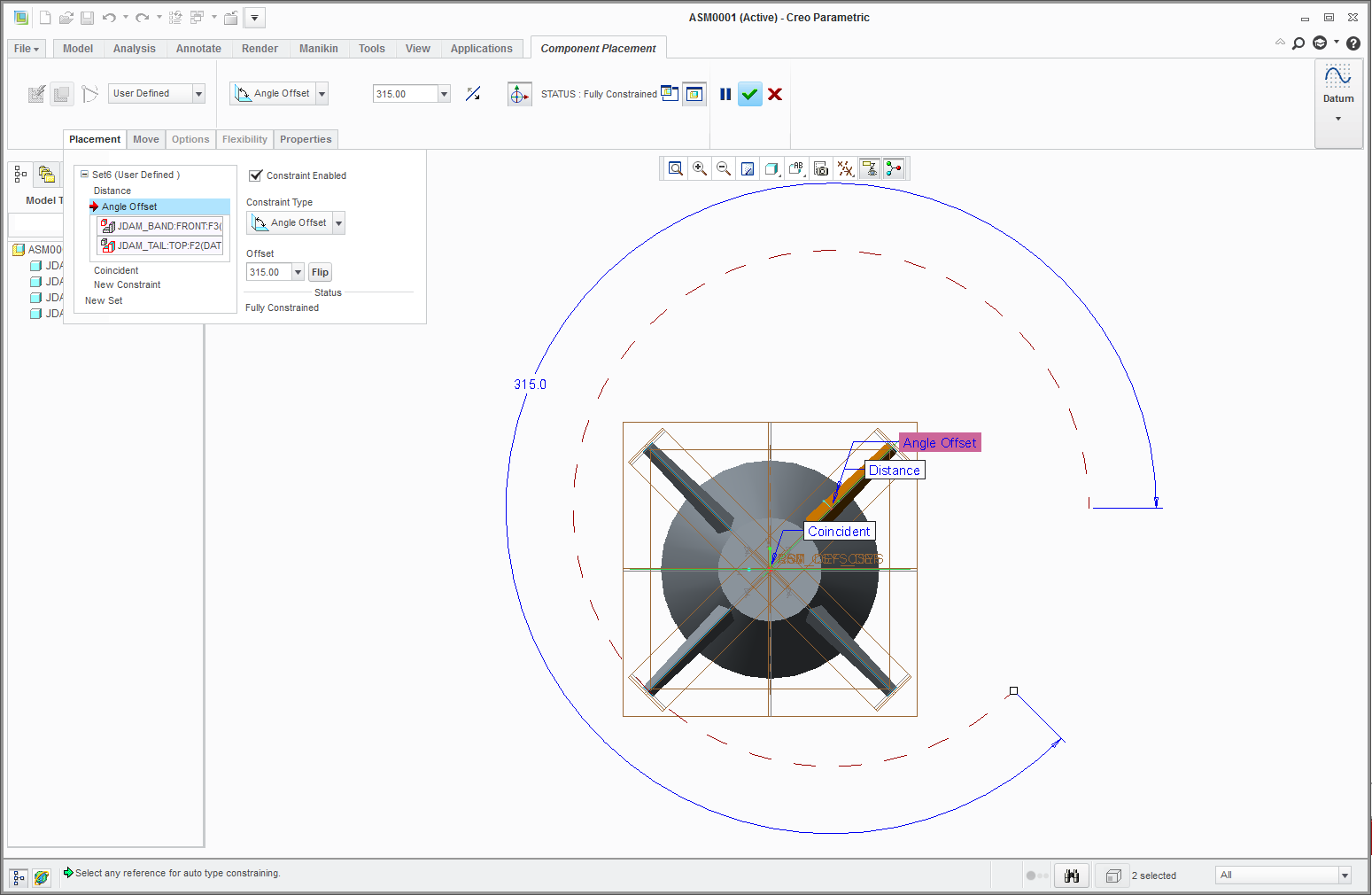 All four fins are inserted at the same location with different rotations. Any guesses to where it is measuring from or to?

My waist is the same as it was in college over thirty years ago and smaller than chest or hips. I have not had the need for big boy pants.