Based off the discussion here:

When defining a detail view in Creo Paramentric 2.0 M010's drawing mode, the current requirements are :

1. Select a center point on the drawing you wish to create a detail view of. (One click)

2. Sketch a spline that encloses that point. (Minimum four clicks)

3. Select a center point to place the detail view.

I have a number of objections to the spline as the default method of defining the area of a detail view.

2: It is difficult to generate a smooth looking spline that does not result in messy view boundaries without sketching a draft circle and laying the spline down on top of that.

3: The center point of the view can't be attached to a space in between two features so that it shows both of them without defining an extra point or (maybe) construction geometry.

4: The preferred option for a detail view boundary (at least on my end) is the ASME circle, which is generated by Creo based on the dimensions of the sketched spline instead of directly defined by the user.  Unless I take extra time and at least double the number of minimum mouse clicks for this operation, the actual boundary of my detail view will not match with the shape or exact proportions of the ASME circle.

What I would like is the ability to use a center-radius circle (2 clicks) as the default way of defining a detail view, with the option to use a spline or better yet, predefined draft geometry or an in-model sketch as an alternative way of defining the detail view boundary.  A circle would also eliminate the need for a separate click to define the detail view center in the base model, and would ideally eliminate the need for the circle to be attached to a particular edge or feature, so I can have the view centered on the middle of two evenly spaced features without taking extra steps to create something the current tool can pick up on.  As an added benefit, the dimensions of the detail view would be exactly proportional to the boundary of the ASME circle and would show everything visible inside the circle, eliminating unnecessary visual noise caused by an uneven detail view boundary and making sure that any other features that might be included in the detail view are reproduced exactly.

The proposed change would result in a minimum of three mouse clicks necessary to define and place a detail view in drawing mode.  Do note, I don't want to get rid of the spline, I can see it being very helpful for complicated parts, but I would rather take an extra click to select a spline, since I'll be wanting to make a more complicated boundary anyways, than take the normal minimum six clicks to define a spline and four clicks if I want a circle instead of the default spline.

Either way, however, would be better of the current alternative of 2 (draft circle) + 1 (center point) + 8 or more (sketch spline on top of draft circle) + 1 (place view) + 2 (double click correctly or 3 to select the view in the drawing tab, right click, properties) +1 (select ASME circle) = 15 or more clicks to get a detail view with a smooth circular boundary that displays the ASME circle.

Great suggestion!  I also would like to be able to use either a draft entity or a model sketch as the basis of my detail views.

If I want a very nice detail, I sketch a circle first and then use it for a pattern to make many points when creating the spline.

Why can't I just click on the sketched circle and use it as the boundary?

agreed donald, and why can't the center of the view be where there is no edgeas sometimes the ideal center is not near edges geometry?  Such as any surface (yes even though it is a x-section) that Creo needs to make it work...

I really like the idea of a circle AND an Oval would be just as useful, if not more useful.

As a far 3rd request I like the idea of adding a polygon (such as a hexagon)...but not really a must like the circle and oval are.

I agree with your idea. I draw many assembly instructions, and it lacks a number of 2D tools in Creo to obtain a satisfactory result.

Here is an example of the results that I am seeking. 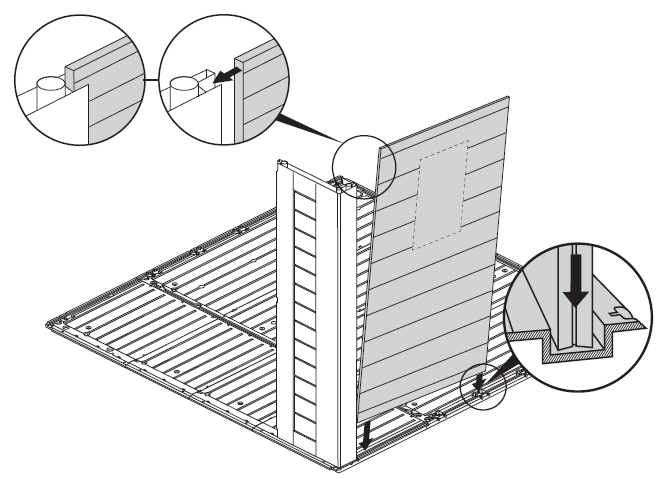 Marc, I could see how that is a challenge with our current tools...how do you do this now?  FTs? Mechanism? other method?

This is the goal I intended, I don't know which software is used to obtain this result.
With my old 3D software (CADWORK specializing in wood) I can get almost the same result (it's an ageless software !).

I have a good result with Creo, but I can't obtain my 2 goals :
• make zoom in circles
• color some pieces in white or in gray

or I have to manipulate PDF with an extra tool like Illustrator... but it's very, very long.
I can send examples of my manuals to show you.

Sounds like PTC should check out CADWorks to get some good ideas!

I have done zoom in circles before. First I use either Mechanism snapshots or FTs to show different positions. Then for the dwg I show the rough detail view, use the pallet to draw a thick-lined circle where I want the boundary to be, relate it to the view (so that it moves and resizes with the view), then under details zoom in and sketch my detail boundary over the thick bolded line using about 5-10 reference points to get a decent circle that wont show outside my bolded circle. This is a time consuming work around but I (eventually) get the desire result

I have no way to do this...perhaps Creo View or Creo illustrate...???

I am curious at the examples you refer to...

Have you tried Creo Isodraw? Isodraw is the PTC solution for creating manual visuals...

I just thought I would bump this idea to the top again. I hate the spline sketch.

This would be a welcome change, the amount of clicks to create a circular detail view is unnecessary and frustrating.  It should be the default option.

Not to mention that you can't edit the boundary view spline - you get to trace it all over again.  Still, using this software is better than using the drafting table.  Or programming with punchcards ...

Does anyone know if this has been addressed in the new versions? I'm stuck in Creo 2. The spline is still irritating.

Wow, just started using Creo 4 and this is still a " click many times" operation.

Does anyone know if it is different in the new versions?