Autonumbering in Creo Parametric is not consistently implemented.  In some places Creo displays <auto generated name> and doesn't consume a number from Windchill until the action is completed.  In other places Creo consumes a number immediately, as soon as the related dialog is opened, before any actions have been completed.  (Just opening the dialog and closing it will consume a number.)  Please change this so <auto generated> is displayed everywhere and no number is consumed from the database until it's actually needed (the action is completed.)

Everything works exactly as desired when creating a brand new file in Creo.  No number is pulled from the database until the object has actually been created.

This falls apart everywhere else.  All of these other actions will pull a number from the database as soon as the dialog is opened:

Wasting a number every time one of these other actions is taken is making the whole thing unusable (at least for us.)  Yes, it functions, but it's not acceptable to "waste" 80% of the available numbers.

Note:  There was a previous product idea but it was 'Archived' due to its age.  Unfortunately this problem still exists so this idea was created to replace it (and at the direction of the Community management.)

13-Aquamarine
This enhancement is urgently needed.

I'm surprised PTC hasn't acknowledged this yet. It's received a lot of votes and shouldn't be that hard to implement. We would definitely take a closer look at using Autonumbering for Creo if it had these changes.

PTC has never figured out how to deal with Product Ideas. Over the years since the enhancement request moved from tech support to the community (which I think was a good move), there have been mutliple attempts by PTC to make a process in which Ideas were reviewed and processed internally. Nothing seems to have taken root.

Very few enhancement requests results in a new sale to PTC. The sales demo guys know what areas to de-emphasize during demos to avoid the weak spots in the code. They want to show how easy the software is to use and dazzle the prospect with color displays and charts.

It would take a very technical person to write a requirements document for PTC to demo against that showed any of these types of weaknesses in their product offerings.

It has been added to the roadmap.

This has been added to the Creo roadmap and is currently under review, but I cannot yet commit to any release.

Anyone know if there are any updates to this topic. Is changes planned/committed to any release yet?

@ArnaudVandeVeer can you share half a year later any roadmaps info?

We didn't manage to get it into Creo 9.0, but we're still interested and have it on the short term road map.

We didn't manage to get it into Creo 9.0, but we're still interested and have it on the short term road map.

As Arnaud mentioned, it didn't make it to the 9.0 stream, but is still being considered in the next couple of releases. I'll update when I have more information.

Please also include the Assembly Save a Copy Menu when fixing this - see image below. 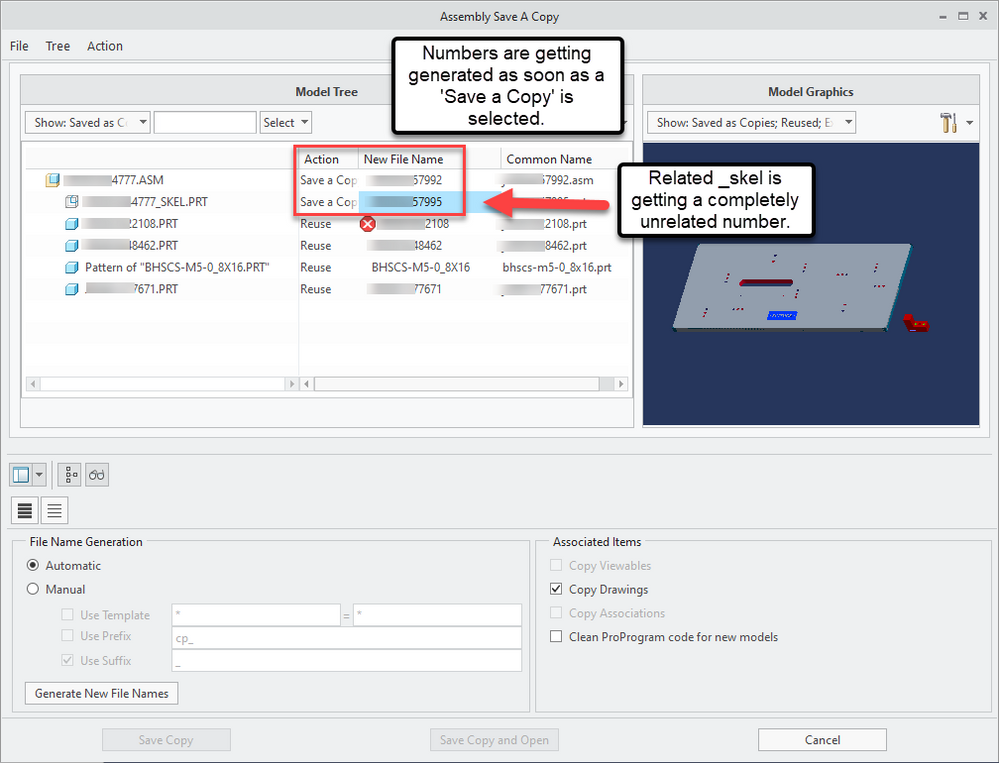 Agreed with all the above comments.  Our company is just investigating the implementation of auto generated Name (ugh! why is this not Number or ID, Name is the wrong word), and I have reservations that the arbitrary nature of generation will wreak havoc on our business systems.

Also running out of numbers will be an serious issue because in a lot of situations (examples above) the number is raised but not used.

The numbering schema can be changed in the OIR.

You can add a prefix to your numbers, define the length of the number, etc.

I know, but after 2 years having this auto number, there are more unused than used numbers.

A needed enhancement, not only to fix the inconsistency!