Improvement of measure feature for shells in Mechanica.

Improvement of measure feature for shells in Mechanica.

Currently the way how Mechanica reports measure results for shells is not correct. When the user measures for example a stress at a point of a shell element (compressed sheet), the measure can actually report results from the opposite side of the plate.

The following example shows a shell model with two measures. One on each side at the same location of the plate. Since the plate is loaded with a combination of bending and tension, the stresses on top and bottom are different. In that particular example the stress on the top side is -1 MPa and on the bottom side the stress is 3 MPa.

Figure 1 Example of measures on a compressed sheet 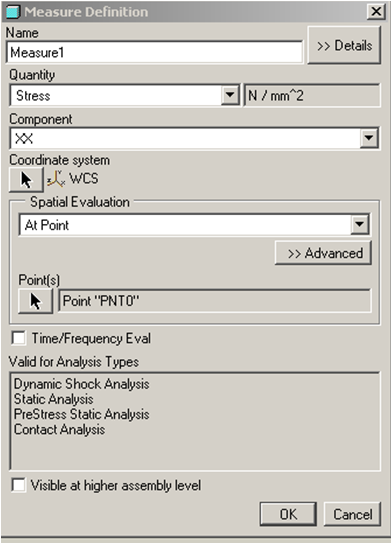 Based on the definition of the measure (at point) you would think that Mechanica will report the stress of the plate on that side where the user has created the point. Unfortunately that is not true. The measure will report the maximum absolute stress of both sides of the compressed plate. For that particular example the result will be 3 MPa. In that case you simply do not know on which side the stress is. Even when you create two measure each per side, you get two times the same result.

That is simply not acceptable because the user does not know which stress on which side was measured. The solution PTC provided is the following:

Instead of measuring at a point, the user should select Maximum and Minimum near a point with a small radius like below. 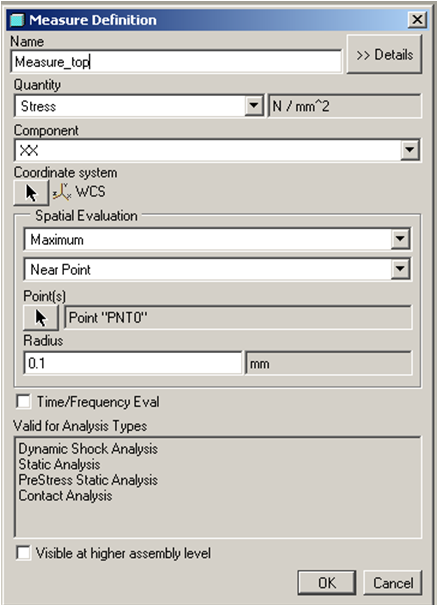 Unfortunately the reported results in Mechanica will still be insufficient, since the user still does not know on which side the stress was measured. In that case it all depends on the definition of the measure  (maximum/minimum).

If the user would flip the maximum and minimum definition of both measures (Figure 4), Mechanica would report exactly the opposite results like below:

The right way of solving that issue would be if the user had the choice between the sides of the plate. To achieve this when a measure on a shell meshed surface is selected, the arrow representing a surface normal vector should appear to allow the user to select a side the measure is related to. Assuming that “top” corresponds to positive normal direction, top, bottom or both sides can be selected. In case of both sides actually two measures have to be reported separately for top and bottom.

In addition for compressed plates it would be helpful to default to the side where a point (or region) was created with option to change manually in a measure setup menu (to switch to another side or to report both sides).

This Enhancement was opened as a Case/SPR

Thank you for your input for improving Creo Simulate.