The purpose is to switch from the ProE font.ndx/stroked stick font to a modern font.  This helps with:

It should at least have the following features/compatibility:

According to the standard, it should be:

To be useable it should also be:

Great discussion on this:

Doing some more testing I also noticed that the font name is a bit confusing for the variations of fonts.  If going production with a modern font it would be very helpful to have the font set in the format tab, and actually show what the font is regardless if it is bold or not.  Currently, if some of the text is bold and some is regular Creo will report the font name "As Is" because it sees the Regular and Bold fonts as different fonts, even though the bold button usually switches it automatically.

Entire font box selected: As Is

Does this mean that Creo has the ability to output a variable width TrueType font? It certainly looks like it! I wonder why using a TrueType Font disables the width ratio on the menus? Being able to specify the font used during a "stroked to TrueType" conversion at PDF creation (that allowed variable width ratios) would be phenomenal.  I'd like to see PTC:

Then work could be done with the more performant stroked font during drawing creation/editing and then exported to a TrueType PDF without issue.

EDIT:  I had intended to include an image but community.ptc.com refuses to let me upload it. 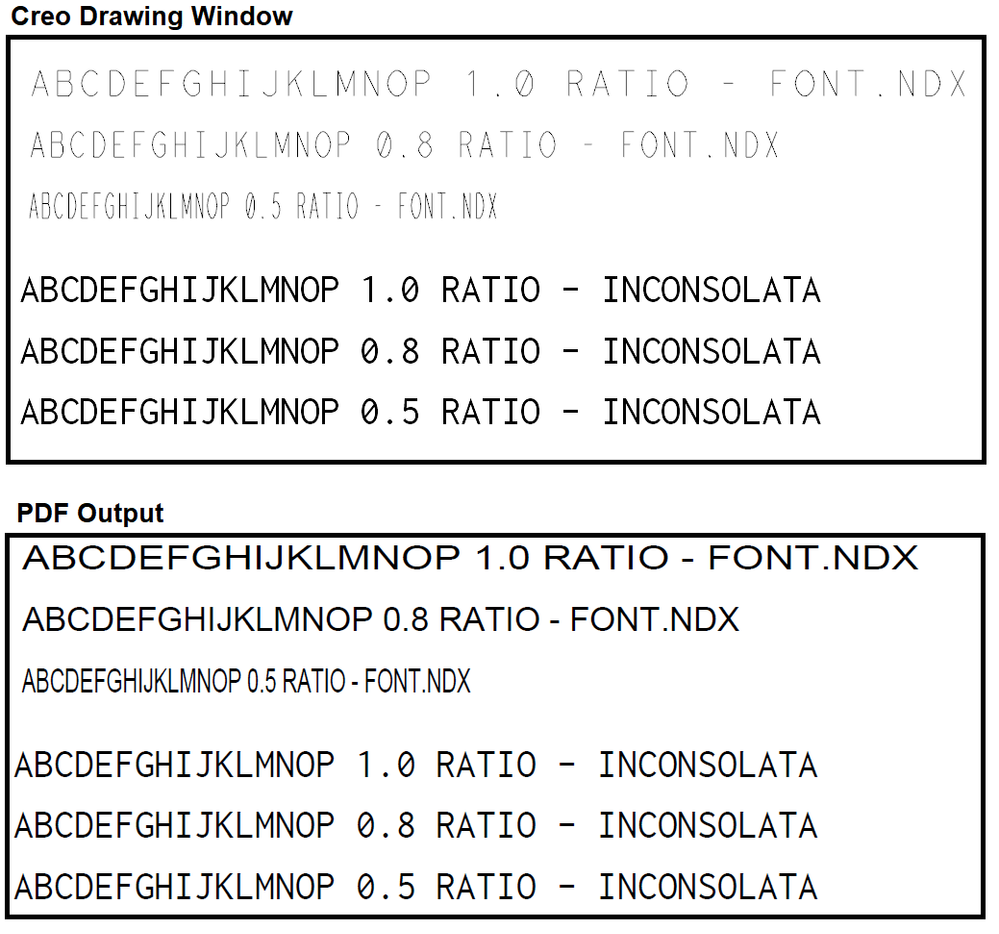 @BrianSnyder ,  This was a very interesting find that Creo can output variable width TTF but yet cannot change the width factor for text shown on the actual Creo Drawing.  I did some more testing and realized that we change the spacing a lot in order to fit text in tables or other tight places.  This would be a real obstacle to converting font.ndx to TTF.

Allowing us to change the width factor could be most helpful for the spaces between words.  It seems very odd to me that in Creo the TTF spacing between words is so close together.  It is more difficult for the eye to pick up where one word begins and ends.  This issue may be inherent to modern fonts when combine with all caps (which ASME Y14.2 still requires), however it does seem at least a little better in MS Word for the equivalent fonts.

I just tested the Courier New because it is monospaced, single stroke, and TTF (although it is not sanserif...so Courier has the flourishes).  It looks pretty good in that respect, however, it is wider and takes more space on the drawing, combined with the fact that Creo doesn't allow us to control the width factor..  I guess back to the drawing board! 🤔

Fortunately we don't deviate from the standard 0.8 width ratio very often. Usually in revision blocks but not that frequently. For the time being as I re-work drawings over to TTF formats I've been using the semi-condensed version of Incosolata where required and it appears to work well. Hopefully someday PTC can enable us to replace the default "ArialMT" with a font of our choosing. Preferably PTC themselves would create (or commission) a variable-width TTF that is a replacement for font.ndx, differing in that it has all unique characters of course. When selecting "stroke all characters" for PDF output this custom font should be the default.

@BrianSnyder, reading this again a year later I see there may be a point of confusion for some.  As I understand your comment is that by "variable width TTF" are you NOT requesting that it NOT be monospaced.  Rather you are requesting the ability to continuously vary the width like we currently have with the monospaced font.ndx.

As a side note, I was working with someone from our marketing dept who deals with font types a lot, and he was very surprised that Creo coudn't continuously vary the OTF and TTF width to make more narrow or wider upon demand as that is a feature within those definitions.  Also noteworthy, he was also quite surprised that we don't have modern indent / tab-stop control for notes, tables, etc. 🤣

Correct. I am not asking for a non-monospaced font but for the ability to output a TTF font (monospaced or not) to PDF that respects the user input "width ratio" in the same manner stroked fonts do. The goal of my dialog here was to prove that Creo can indeed do this, but it's restricted to stroked drawing text converted to ArialMT via the "stroke all fonts" option during PDF creation.

Thanks for the clarifications!