Need a certain amount of irregularity in patterns.

For example: patterns letting you define regular spacing between features and the possibility to change diameter. 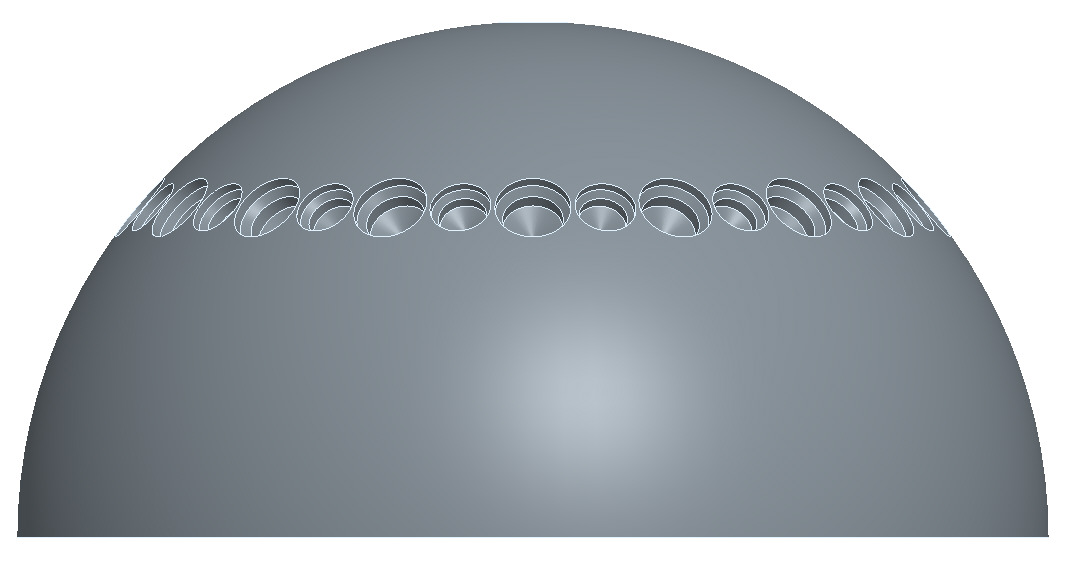 These kind of “patterns” are examples:

This idea formalizes the suggestion of Pattern Tool Enhancements made to Brian Thompson in 2010 PTC USERS (and later on).

You should check into "Define increment by relation".  In the "Dimensions" tab in the Pattern tool you will see the check box for using relations under the dimension collector area. You can probably do all of the examples you've shown and many more very complicated patterns using relations.

Are you considering this being solved with:

a) the usage of "Define increment by relation"?

b) the potential usage of bodies to define a certain base pattern oOo, that can then be patterned again?

We have defined complex increments by relation for our personal use and created UDF to reuse the encapsulated intelligence.

The idea is demanding PTC to offer other types of "native" patterns.

Could you please illustrate your second point:   "bodies to define a certain base pattern oOo"

Always with the idea of filling irregular holes along a curve (for exemple morphing from a small hole to a large one).

The "same" idea with filling a surface with different dimensions of marble.

For some use case you will need to use relations and having an irregular pattern would make things easier.

What I had in mind with my second point is illustrated in some example models (attaching them didn't work yet, I will follow up on that, but can also send them to you)

(one is using fill-pattern, one is using dim pattern along with the idea of using solid holes as bodies and one has a more complex body as shown in the following image).

It does need quite a number of features, but maybe my examples illustrate a potential alternative method to cover some of your use cases without the need of relations in patterning.

I was looking for possible ideas similar to one I want to propose, and this has some similarity.

What I would like to have, is the ability to modify any regular pattern (dimension, linear, circular, table, and in the user interface add another "Tweak" tab" move or modify the positioning of a regular instance of any pattern. Currently we can supress an instance, making it irregular, but we cannot reposition any instance positioning. This should be possible, since sometimes in a project we try to space features or holes apart using a regular spacing, but later in the project we verify that it interferes with something, and we have to tweak the positioning of one or several instances. If we use sketchd point patterning it's easy to move one of the points, but in any other pattern types (excpet table), it's not possible to tweak any regular spacing between instances.

A possible alternative to modifying the current UI of the pattern feature, adding the "Tweak" tab, would be to create a special Tweak pattern feature, that would reference an existing regular pattern, and allow the user to move in X, Y along a reference, and which would produce as output the positioning of the original pattern.

I know that there is such a thing as Flexible modeling to move a specific instance (for instance, a hole) of a pattern, but this is not parametric, since another part can be reference patterning the original regular pattern. It would be better to create the features in a tweaked irregular place, modified from a regular pattern, that using Felxible modelling move, in several parts to obtain the desired result. It would be a time saver, and allow to avoid any possible errors due to the not parametric nature of the Flexible moves across several parts in an assembly..