The Creo Manikin library has Manikin files for just about every country. We have learned that the US Manikin models do not adhere to MIL-STD-1472 dimensional requirements. That seems like a shortcoming knowing that many US Defense contracts require the documentation in Creo. The current US Manikin does not seem to be receptive to modifications that could bring it closer in alignment with the MIL-STD dimensions. PTC Creo, can we have a Manikin library that adheres to MIL-STD-1472? 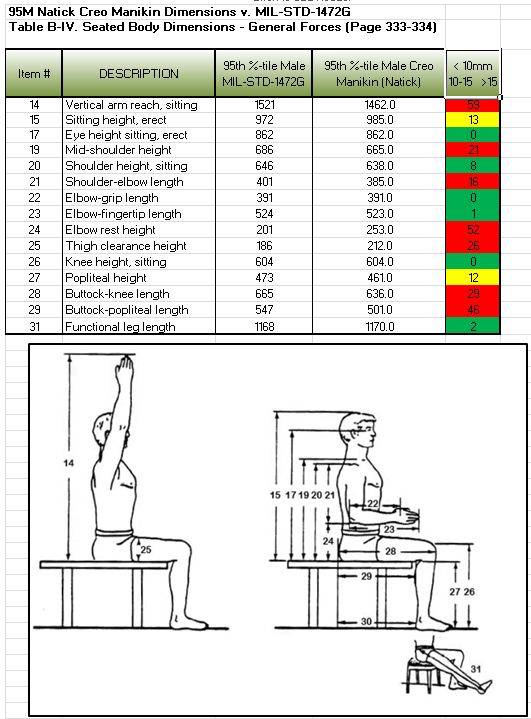 I created a support case for a similar question a while back.  And this is the explanation I got back...

“Measurements are compared to the 1988 surveys in DOD-HDBK-743, Anthropometry of U.S. Military Personnel.”

If this refers to the data on page 380, the difference is to be expected. This is because those are the univariate statistics for Sitting Height independently to any other measurements, and the Creo manikins use the whole survey data, so they only match the univariate percentiles for a few measurements. Let me explain:

It is not possible to have manikins for which all measurements are at a specific percentile. This is because, while dimensions can be additive, percentiles are not. For example, think of the variables Sitting Height and Crotch Height, which if added up would result in a value close to the Stature. Now, if a manikin had both Sitting Height and Crotch Height at 95%, its Stature would be well above 95%. So we can’t make a manikin with all measurements at 95%.**

We have chosen Stature and Weight as the independent variables in the Multivariate Regression because those two measurements are the ones that correlate best to all measurements describing, respectively, length and girth, and this accounts for most of the human body variability. This is the most general and widely used approach in Digital Human Modeling to represent 90% of the population with 6 manikins.

This having been said, how does it apply to your work, i.e. is it ok to assume that your design is accommodating 90% of the US Army population by using those 6 manikins? It depends on how targeted your design specs are: Although the measurements of the manikins’ Sitting Height does not cover the whole single variable’s 90% range, the manikins has realistic values for all its other measurements such as leg length, which may also come into account in the design requirements, either implicitly e.g. for seat height, or for specific tasks such as reaching for controls or pedals, etc. Unless the task under analysis is so specific that exclusively the sitting height is important, it’ll be preferable to use a set of general manikins.

**Except for the ISO 3411 manikins, which are not based on a statistical model but on a specific set of values