Redefine (and not DELETE and RECREATE) a master rep general view and CONVERT it in a simplified rep view for a PART drawing.

A Customer want to show different status of production in the drawing.

He has show the last as master rep.

In any general view of a part, I would like to be able to select what rep it uses, just as you can replace the family table instance.

Please implement the ability to change the simplified rep of an existing drawing view.

Please implement this. Just had a user bit by it.

My company would utilize this immensely as we would like to create parts in a slightly different configuration without the trouble of family tables and being consistent with the 3D annotations.

I'm happy to report that we are working on adding this enhancement in Creo 4.0...

I'll provide an update as we get closer to delivering that release.

I just tested the functionality in Creo 4.0 F000 and it is still not possible. Is it planed for future builds?

Maybe if we tag Raphael Nascimento, he can elaborate on if the enhancement was added or will be added in a build code.

Thanks for letting me know that I had forgotten to come back to this idea with an update now that we've shipped Creo 4.0 F000.

The ability to replace the model of a drawing view with a different simp rep at the Part level is indeed there in Creo 4.0, it's just maybe not in the place where you expect it.

This enhancement was added as a command available in the Ribbon and in the menu that appears if you right-click on a view. 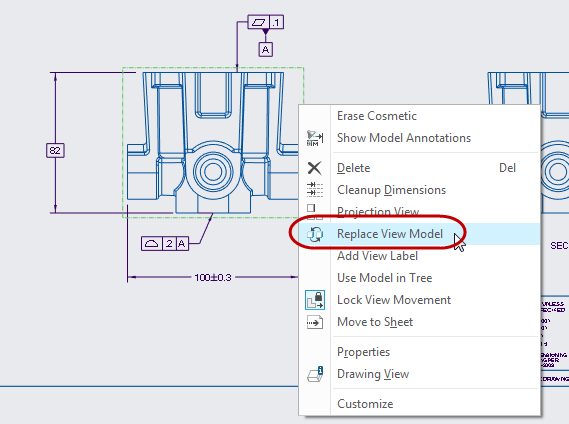 So, it is available as a command that is executed on a number of views instead of as a modifiable property of a view. There are some technical reasons why it was done this way, some of it has to do with the fact that we're leveraging the same functionality for replacing a component in an assembly. You'll notice the dialog that appears looks familiar as the Component Replace dialog from 3D. In addition, by making it a command we can apply it to a number of views all at once. Views that have a dependency (projection views, detail views, etc...) need to be replaced at the same time since they would, of course, be expected to be of the same model, but you can also add all views on the sheet/drawing that currently match the same model/rep. We also provide the ability to delete the old model from the drawing if you replace all of its views and we can also replace any callouts that refer to the model which aren't a part of a particular view.

I'm going to mark this Idea as Current Functionality now that it's been implemented.

Thanks for the response Raphael!!!

Topaz I
Status changed to: Acknowledged

Updating the status per my predecessor's notes in the past (Raphael).

The below mentioned functionality "Replace View Model" that was introduced with Creo 4.0,  now allows to replace a Master rep that is applied to some drawing views by other Simplified Rep of that part