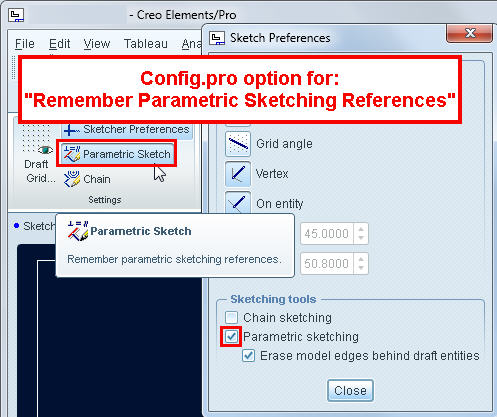 I am trying to understand the way that "parametric sketch" is being used by users, so I would really appreciate  if you can help me better understand the tendency of using this option

For us, the use would be mainly for schematics (electrical, hydraulic, etc.).  We have started using Visio to create schematics.  The harness module is to cumbersome and problematic for us to use and sketching in a drawing with CREO is unusable.

We also import dxf files of our fabric patterns from the sewing dept. to make drawings of the patterns.  These need little manipulation, but each shape must be made into a draft group to ensure that lines do not move.

Does it mean that you would prefer using parametric sketch in 100% of the time (where a shape maintains its shape as you drag it for example)?

Also which aspects are the most troubling for you with the drawing sketching tools?

If I am adding sketched entities to a drawing, I would always want them to retain any constraints used in their creation.  To "lock" the entities to a view, I have to create a draft group and relate that draft group to the view.  This locks the shape of the group and moves it with the view, but allows the group to be moved in relation to the view (purposely/accidentally).

For the small amount of sketching I do in drawings, I don't have many troubles with the sketching tools.  The issue is the loss of constraints after placing an entity (horizontal/vertical, parallel, coincident, etc.)

In Creo8, Sketch options like "parametric sketch and chain" are no longer available by default in sketch tab in drawing mode !