At sketcher, arcs which are (tangentially) connected to surrounding lines and arcs there is two (mathematical) solutions for resulting geometry. Currently users have to push in some effort to guarantee the desired result for highly prarametrized models.

Provide additional sketcher constrain, which will guarantee the (shorter/longer) arc during any dimensional change. 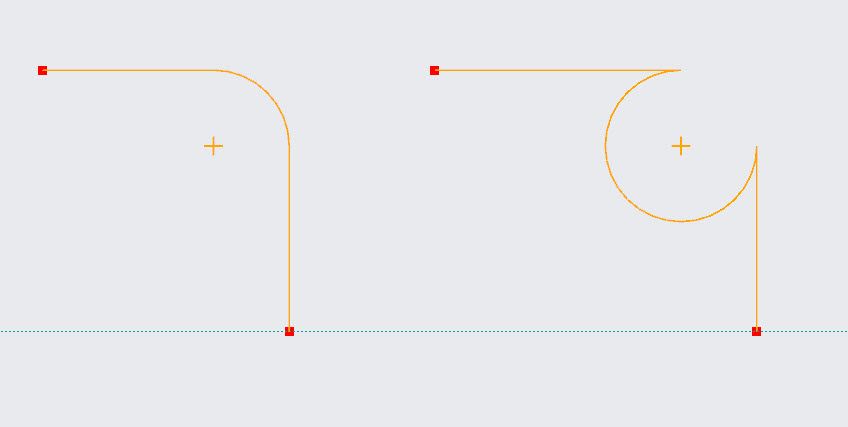 thanks for your input. Interesting idea. Do you have some sketch examples that would exhibit this behavior? If so, please send to mneumueller@ptc.com

Thank you very much

@mneumueller In the screenshot one could for instance dimension both lines with a 90º angle and specify the radius value of the arc. If we needed to parametrically change the angle between both lines, to an angle greater than 180º, for instance, 270º, the sketch regeneration would fail, because the arc would not change the tangent direction. In this case, we ould have to delete the arc, drag the lines for the other side, and then re-apply another arc. We could not even replace it to maintain the same entity ID. So, there is room indeed for improvement to deal with this situations. Here, I think the problem is that the fillets (or chamfers) in sketch are not parametric operations, meaning, the arc is applied, specified which side of the lines its origin belongs to (quadrant), and the lines are trimmed, but then, the arc and lines stay as regular sketch entities, and not entities to which an operation (fillet) was applied. It's like a "dumb" solid in 3D operations. I think to guarantee the desired behaviour, the sketcher would have to add fillets and chamfers as internal feature operations and kept in an internal model tree (like the offsets operations). If this operations would be kept as an internal 2D "feature tree", operations like fillets, chamfers, offsets, mirrors would be parametric, and would allow us (finally) to also have parametric 2D patterns (which would also allow us to have parametric polygons instead of having to copy pre-defined polygons form the pallette, which we cannot parametrically change the number of sides as a parameter selected by the user, which as workaround forces us to do certain operations as patterns in 3D that could more easily be solved in 2D, with faster regeneration times).

Even if there could be added "intelligence" to the sketcher without adding an internal 2D operations feature tree to solve this particular problem as shown in the original poster screenshot, one thing that could be added is the possibility to simply internally hide the arc if the angle between both lines becomes too small (close to 0º or 180º), meaning, the radius would tend to infinity. In this case, both lines should be trimmed to each other at a vertex, and the arc internally supressed, to be restored if the angle between both lines is changed to allow the arc to be re inserted with reasonable radius value. One could even go further and try to allow both lines to have a 0º angle if needed in certain regeneration "configurations", but that would be more difficult to solve, even taking into account for instance a previous vertex location for the intersection of both lines, when they ar at an angle to each other.

In this case it's easy to add that new constraint, smaller arc length. It's easy to calculate it's value, and it would guaranteee that we would not get "sharp" vertex at the tangency points, and only "smooth" vertex.

2. What version of Creo Parametric are you currently running?
ANY

3. Describe the problem you are trying to solve. Please include detailed documentation such as screenshots, images or video.
Parametrization of 3D models with predictable results for arcs.

4. What is the use case for your organization?
Unable to guarantee the stability of arc geometry leads to multiple sketches and cumbersome solutions.

5. What business value would your suggestion represent for your organization?
Enabling fully automated model modification and generation. Time to market.

Can we get further input/feedback from users voting for this idea?

a) Can we get more example sketches that exhibit unexpected behavior?

This is probably the most important ask as it helps to narrow down the problem statement. While the above example seems simple, it would be interesting to understand whether the sketches are fully constraint with the intended constraints & strong dims, or whether there are some weak ones left that might be suboptimal. The more examples we get, the better we will understand the problem statement

b) is the problem statement really related to (flipping) fillets only or is this for tangency/anti-tangency flipping in general?    (e.g. would we solve the requirement if we found a solution that only works on arcs created by the fillet tool?)

Partial circles (arcs) are a real challenge when the angle between the endpoints is adjusted, especially around 180 degrees.  It's very common for Creo to suddenly switch the direction of the arc and completely mess up the sketch (as shown in the picture attached to the idea.)  We try to get around this by creating additional, full construction circles.  We're also very careful how we dimension the angles between the tangent segments, but sometimes it still flips around.

The issue that I encounter the most related to this is seen when trying to drag sketch entities, and sometime when changing dimensions.

The tangency of an arc will flip between 180° tangency and 0° tangency.  Dragging the free end of the 100 mm line can cause the arc tangencies to flip.  This can get very frustrating in a more complicated sketch.  I often us undo when dragging entities in a sketch after applying defined constraints because one or more tangencies have flipped. 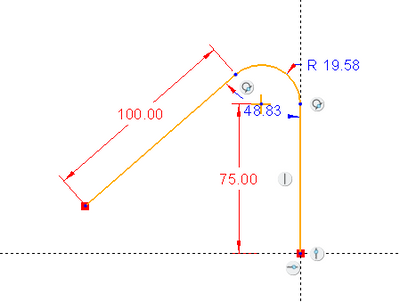 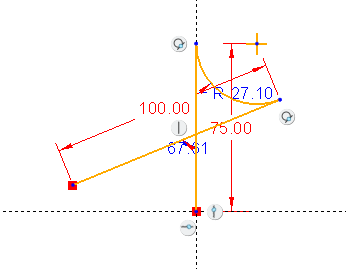