On a Creo drawing all three of the following look the same:

We have a reoccuring note on our drawings that contains the phrase "1D".  Someone unfamiliar with the note topic may be confused to see "lD".

The number "1" in a note can be made to look like a number with a change of font, but, when the note is placed in the Notes Library it does not retain the font change.

Request:  Please make the number "1" look like a number in the default Creo note text.

change the default drawing font. You use default font named font. Change it for example to isofont. You can test all fonts available (try to modify a note on the drawing) and set the appropriate font as your default font.

Thank you Martin.  I will check with the main Pro/E team here about this.

The ascii.fnt file that defines the font "font" in Pro/E can be revised to accomplish this as well.  This was discussed years back on the ptc user discussion board and someone posted a font file that made the "1" distinguishable from "I" (upper case I).  The only issues with it were it needed to be recompiled for 64 bit systems and it gets overwritten with PTC's original when you do software updates.  To address this I have a separate master ascii.fnt file for 32 bit and 64 bit systems on our server and it gets copied to the appropriate folder in the ProE install along with standard config files at startup.

I saw the file you mention (I think), and have tried to use it but haven't got it to work.

Is it possible for you to post the file (for primarily 64 bit) and also a short description of what to do with it.

It would be much appreciated.

I agree that Creo should write correctly the number 1 in the default font and without a user developpement !

Thanks for this idea !

ASME has their own font which meets the ASME Y14 series standard for numbering and lettering.  See: Committee Pages - Y14 Subcommittee 5.2 - Certification  You'll have to use the pro_font_dir option or perhaps another option to point Creo to the font.  Then for printing I've found you must also Install the font (on Windows 7) into the operating system so that when you print to PDF using True Type fonts, the font renders successfully.

As a side note experiment with printing to PDF using True Type fonts with this font versus the option 'stroke all fonts'.

Isofont is very basic looking, and if you print with the setting 'Use True Type Fonts' Creo will substitute that for some TT font.

Here are three fonts compared including the ASME Y14 2009: 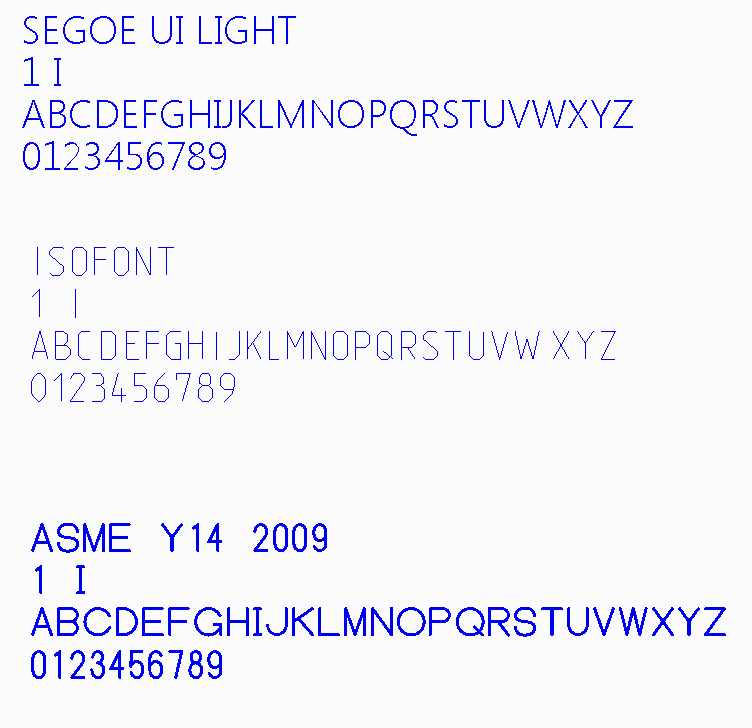 CS40278 explain that these font is only solution for the multi language environment.

You can also edit the default font by following the instructions in the administrator's guide.  The instructions are archaic and written for unix (even in the Windows guide), but it is fairly easy to interpret.

Changing the default font for us at Cummins could be done, but, it would be a very difficult task to communicate this to our Contractors.

Contractors come and go and there are many around the world.

Thank you very much for the response.

According to info from the January Technical Committee meetings, the default drawing font for Creo 4 will be changed to Arial, which should fix the appearance of the number 1, and avoid many headaches customers encounter in trying to replace the default.  Good job, PTC!  (Creo 4 is reportedly targeted for a Q4 2016 release, but not final yet.)

Arial still has the problem of lower case L - l- and capital I - I - looking the same. It is also a 'bolder' looking font so the lettering plots differently.

Please use a font that shows a total difference between all numbers and lettering!

That's classic PTC.  When confronted with a larger problem characterized by a specific issue, they provide a fix that only addresses the specific issue.

According to ASME Y14.2-2014, Fig. 6-2, it looks like PTC deserves credit for changing to meet the requirements.  (The upper case i (I), and lower case L (l) are both vertical lines.)  The fixing of the number 1 appearance was a big deal for us.

I could be wrong, but doesn't Y14.2 and Y14.5 both require UPPER CASE for all lettering?  If that is indeed the case, then does it matter how lower case i and L look (since they're not supposed to be used anyway)?  Just curious...

Yes, for the most part drawing notes are supposed to be in upper case, but there are some exceptions when used in abbreviations and such.

Thanks Terry Partridge‌ for mentioning the Creo 4.0 project.

Just to be clear for everyone following this idea, here's some more info about the issue, the approach we're taking and the thought process behind that approach:

Yes, the default "font.ndx" font does not adequately differentiate between number "1", lowercase "L" and uppercase "i". Updating that font definition is not a viable option because it would impact existing drawings that use that font and violate the policy of preserving the as-stored appearance of a drawing. (If anyone wants more background on this, I'd be happy to provide more details outside of this comment thread.)

We will be obtaining the Arial WGL font (TrueType) from our font vendor for inclusion with Creo 4.0 and this font will be the new default for Latin-based languages. We will also be providing a TrueType version of the ISO font for companies that follow ISO standards and need to use a font that complies with ISO 3098.

The reasons I'm choosing to use Arial as the new default are:

We could have chosen a different, non-standard, font as the new default, but we often get complaints from customers about not following standards. So, given a choice of following the standard or using a non-standard font, I'm preferring to follow the standard. If you'd still prefer a font that differentiates between lowercase "L" and uppercase "i", you are still free to change the detail option "default_font" to your favorite font. You can even set the config.pro option "pro_font_dir" to the Windows fonts folder and have access to all of those fonts if you'd like.

If anyone is feeling really ambitious you could also contact someone at ASME and ask them why the font they specify in their standard doesn't differentiate between lowercase "L" and uppercase "i". I don't know anyone on the Y14.2 subcommittee since I only sit on the Y14.41, Y14.46 and Y14.47 subcommittees.

I'm also changing the status of this idea to reflect the implementation in progress.

If anyone is interested, I have a modified ascii.fnt with a serif on the 1 and a strikethrough on the 0 (zero)

I definitely have it for the 64 bit systems and I believe I have a copy of it for the 32 bit systems in my archive ( warning!!! don't ever mix them up! they will crash Creo or Pro/E instantly).

In my past life, it was used with conjunction with the config.pro setting :use_pre-wildfire_text_font yes

It's VERY nice to see progress in this area but I do have a few questions:

EDIT:  Who do I contact to have my forum display name changed from all caps?  It's annoying looking.

Brian, Message Toby Metcalf‌ and he can fix your forum display name.

Did this get implemented in Creo 4?

No it is still "hookless" for the default FONT.

We expected otherwise so this is a question we will be asking.

Thanks for the reminder.

Like Raphael said, it would have to be completely new, it won't update existing drawings unless you manually update the font.