Often in an assembly the display of datum display tags clutter the screen.  It seems to be an oversight that you cannot toggle their display off just as you can for datum planes, axii, points etc. It would be nice to be able to see the product you are designing and not just datum plane and their tags.

These tags are not controlled by layers, current work method is to manually edit each datum's properties [3+ for many components], and if you do this then you ruin their use as reference datums in drawings. These datums only need to be displayed for a fraction of the life of a part file.

I think this is the same as this idea

No, i mean the datum display icon [I tried annotation display and maybe that icon should also control this].  It is only edited via the plane's properties.  Attached image shows it on a single simple part.  When you have hundreds of these displayed all at once on a complex assembly you cannot see your assembly. 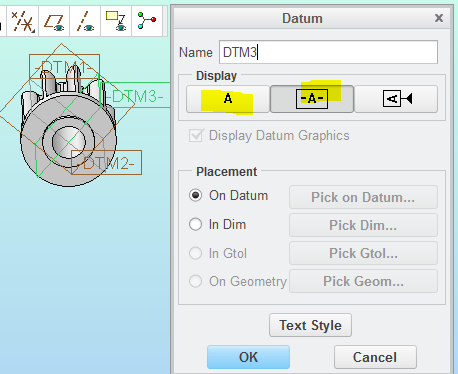 I agree with you, it should be possible to simply hide these references. Here is the documentation (in French ... sorry) we have given to the users when migrating to Creo 2.0. 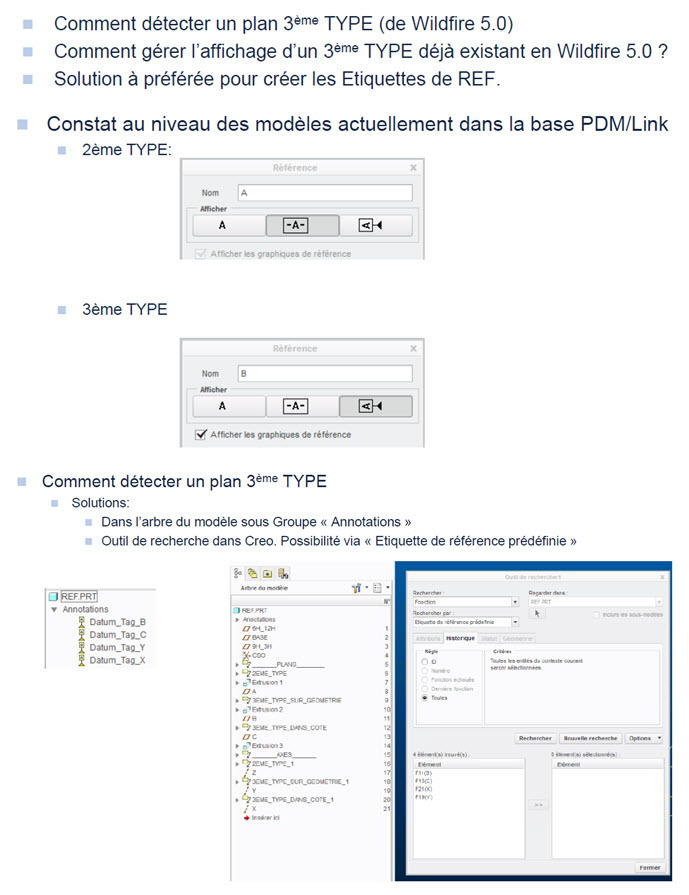 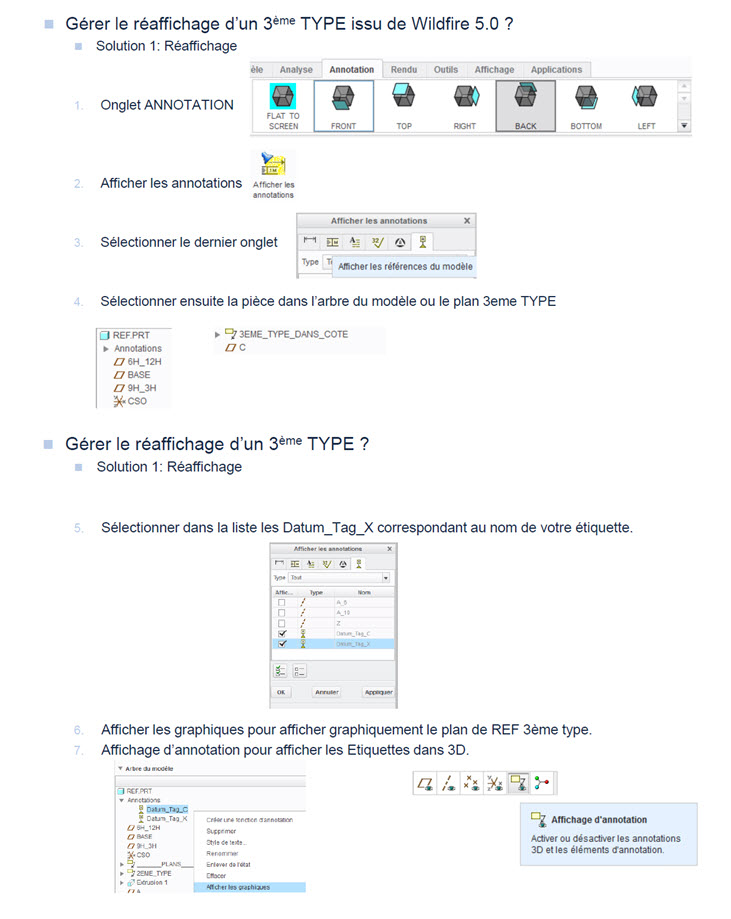 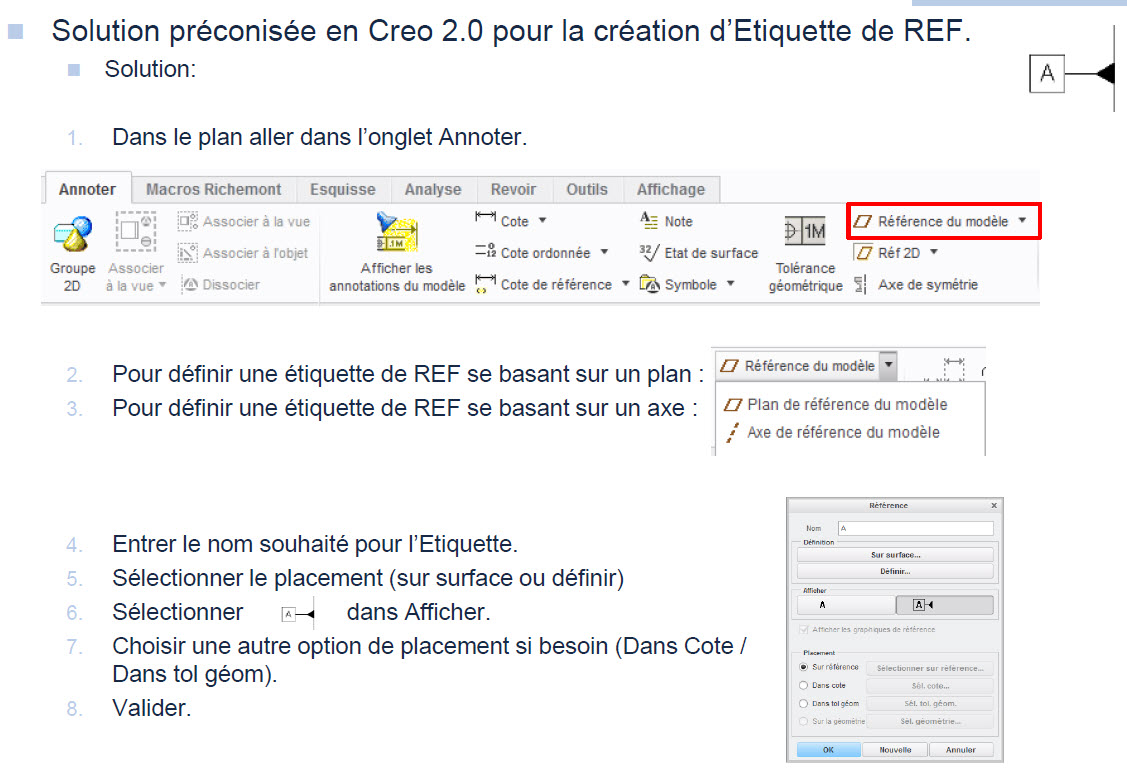 The functionalty you request is already available on View Tab / Show group.

>The functionalty you request is already available on View Tab / Show group.

I think Gagriel is misunderstanding by referring to toggling "Plane Tag Display" it does not control datum planes when the Datum Display Set is set on.

See attached images - these prove that this view control Does control the display of tags on regular datum planes, but Not when the Datum Display Set is set on.

What I am suggesting is to add a control to this group that did toggle these [either a new function or add it to the existing control].

>I agree with you, it should be possible to simply hide these references. Here is the >documentation (in French ... sorry) we have given to the users when migrating to Creo 2.0.

Does anyone have the English version of this?  or know where this comes from?

Hi, this documentation was made for our migration to Creo 2.0. I uploaded it to illustrate de difficulty we face when users try to hide datum planes of different types.

I was able to get the following technique to work [Thanks to Samarth Khandelwal at PTC]. What was missing in previous attempts was the “Shown Datum Plane” filter that nobody found before. I was able to use this rule editor filter to create a layer by rule in the assembly and turn off the display of the many distracting set datums. 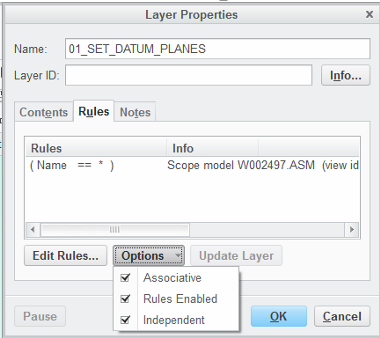 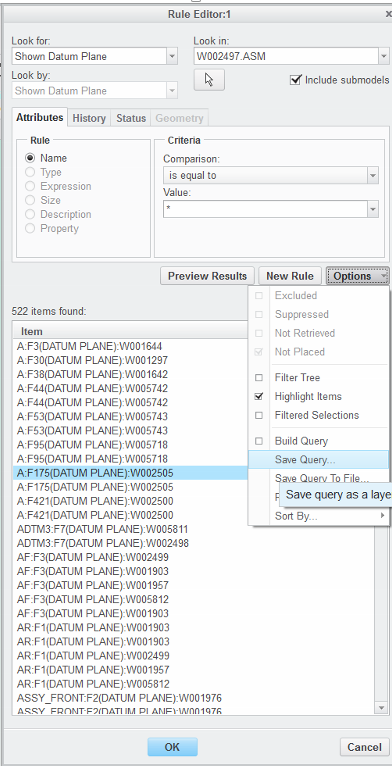 You get 2 new layers, you can turn off the “Rule” layer to control plane display.

Might be able to use a CTRL+F search for "Shown Datum Planes" and then save that query to a single layer instead of 2 layers.