Example of current functionality. Part created with an extrude, create a drawing dimension showing the length of extrude.

Next create a second extrude that cuts one of the ends off or add material . Notice how dimension stays YELLOW (Regenerated). Dimension in GREEN shown to show the change.

This is a major issue. There's NO indicator for someone cleaning up the drawing to know the 30.000 dimension is wrong. Very easy for parts to be scrapped because of this.

Please vote for this idea.

This is a good idea and we are working on some things to provide better feedback to users regarding the "health" of their drawings and the annotations in them.

I can offer a workaround that can identify such potentially out-of-date dimensions, although this process requires that the user perform an explicit action to identify these dimensions and it doesn't just automatically highlight them.

From the Review tab, select Highlight by Attributes. In the dialog that opens, you'll want to check the box next to 'Dimension' in the Item Type group near the top and the box next to 'Show out of date' in the Out of Date References group near the bottom. Then click Highlight and any dimensions that could potentially be out of date will highlight.

I'm marking this Idea as Under Consideration since we'd like to do more in the future to make such out-of-date indications more automatic. Voting should still be open so other people in the community can chime in and vote.

Are you talking about shown or created dims?  I think that shown dims will behave this way, but a created dim would fail and turn purple, but I'm not 100% certain.

I was wrong, neither fails.  Below is a drawing of a simple block (Creo 2), with shown and created dims for its length.  I then added a cut to trim it back and both dims remained. 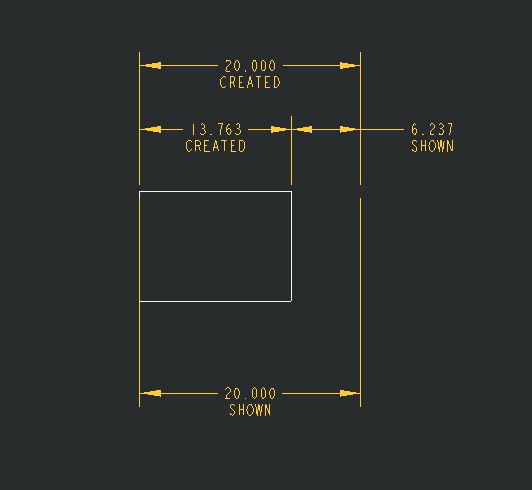 Following Raphael's procedure above, only the invalid created dim highlights, the invalid shown dim does not: 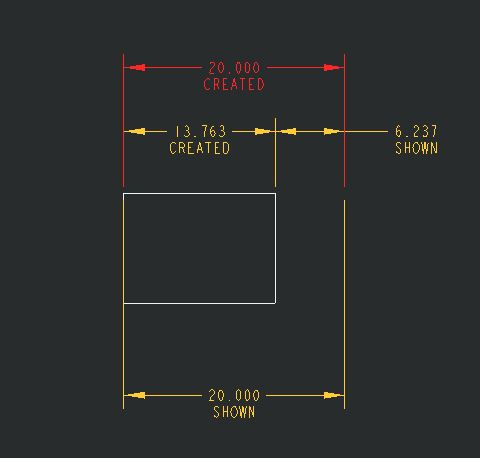 I was just talking about Created dimensions , but if it is possible it would be great for Shown dimensions as well.

Doug, you raise a good point about the purple dimensions that I didn't mention in my earlier reply.

I think I'll take the opportunity to provide some background information that anyone reading this comment find useful to understand how and why drawings work the way they do...

The created dimension will either turn purple or not depending on the nature of how its reference goes away.

Sketch an extrude and create a dimension in the drawing that refers to an edge of the resulting solid. Then create another extrude that cuts away the geometry being referenced by the dimension. This dimension doesn't go purple. This is the case mentioned in the original idea.

The difference between the two situations is that in Case 2 the ID of the edge that was being referenced by the dimension is still in the model database somewhere, it just happens not to be in the final geometry at the moment, but it does exist for a brief moment during the regeneration sequence between the feature that creates it and the feature that removes it. During regeneration, which sequentially goes through each feature in the model tree, the original extrude is found and its geometry is constructed, which requires that the software assign an ID to that edge. Then, some time later in the regeneration, another feature removes that edge from geometry. We keep the original ID around because its possible that it could come back into the final geometry by some modification to the feature that cut it away.

In Case 1, the ID is completely removed from the model because the entity is deleted from the sketch. The action of removing it from the original sketch involves going back into history so that the entity is never created in the first place. It effectively never gets an ID in the database.

So, the drawing will automatically turn to purple any annotations whose references no longer exist in the model database (Case 1). This is a pretty easy analysis to make and it's pretty clear what the user would want in this case. The drawing doesn't currently turn to purple any annotations whose entities still exist but happen not to be in geometry for some reason. The analysis requires a little more subtlety since there are a number of ways that this can become the case and it's not always clear what the user would want. That's why the Highlight by Attributes tool uses the words "potentially out of date". The tool will highlight the dimension and leave it up to the user to decide after the investigate whether the dimension should be kept or recreated. One simple example where a user might want to keep the dimension is the case of adding rounds to the model. A dimension created on the edge before the round was added will not fail when some rounds get added later.

Back to the original product idea... I agree that we should do a better job here, it's just a matter of prioritizing this among the other things we want to do....

I'd suggest that you don't nee to know what the use would want to do, only to inform the user that the drawing may not be right.  Perhaps a new state indicating that the created dim refers to a valid entry that is no longer in the model and means for the user to accept that condition so that it goes back to yellow.  Of course, if another reference went away, it would change back.

BTW (and off topic) - I LOVE that Creo assigns and maintains these entity IDs, exposes them to the user and gives the user tools to maintain them as well.  It's a very powerful system that allows for a lot of flexibility and some great diagnostic tools when things go wrong.  It's my biggest grip about SW, there is no exposure to these IDs (maybe they don't exist?) and few tools for managing references.