Status: Archived Submitted on ‎07-09-2012 02:55 PM Submitted by BillRyan on ‎07-09-2012 02:55 PM
1 Comment (1 New)
Short Description of Issue: Group Features in Model Tree are shown when Excluded Objects are deselected in Model Tree Items Window. Requested Solution: Add option in "Tree Filters" Menu to show/hide group features with inactive components. (Or set it as default behavior) I believe this should be default behavior when all Model tree items for Display and Feature Types in the general tab are Not selected.  (See attached picture for example.) This idea has been generated in response to Case number 10299036. Why: Provide improved navigation for the user in the model tree.  Provide an accurate model tree with only the objects active in the graphics image. Provide a better user experience....this currently causes frustration within our company. Basically, I only want to see items in the model tree that are active in current graphics and inlcuded in the current simplified representation. ... View more
See more ideas labeled with:
5 Kudos

Good to have instlog.txt in Creo as well

Status: Archived Submitted on ‎07-09-2012 05:44 AM Submitted by aperumayisubram on ‎07-09-2012 05:44 AM
1 Comment (1 New)
Instlog.txt give us a unique number for the installation. Using this it was easy for us to understand which version, datecode had been installed & we were able to switch between two versions. It was very helpful for the enterprise level. ... View more
See more ideas labeled with:
4 Kudos

Spot Weld feature to be made more user friendly

Status: Archived Submitted on ‎07-09-2012 02:01 AM Submitted by tushargadhave on ‎07-09-2012 02:01 AM
1 Comment (1 New)
Hi, This is reagarding spot weld feature option in Proe. We find it a bit difficult to use. First we are required to create 3d points and then use spot weld feature. This becomes difficult if the dimension between any two points (spots) needs to be edited. Our requirement is that the points should be generated in the weld feature itself and all the dimensions should be highlighted to make it easily editable. Pl feel free to contact me (Faizan) on 8698030545 in case of any doubt. ... View more
See more ideas labeled with:
4 Kudos

Remove the limit of 31 characters in creo file name

Status: Archived Submitted on ‎07-07-2012 03:24 AM Submitted by TomD.inPDX on ‎07-07-2012 03:24 AM
8 Comments (8 New)
Relation strings needs to recognize a line feed character so one can use a single relation in format tables requiring single line entry or multiple lines entries in title blocks. In the same vane, tables in format files should remember the Wrap Text state when the format is inserted in the drawing.  It is odd that this doesn't behave this way already. Often, fields such as material, finish and even the title often use only one line of text and on some occasions require a second.  In order to keep a tidy drawing format, a one-line text be centered in the cell.  When 2 lines are required, again the nomenclature should remain centered. Is it a bug that the Wrap Text option is not maintained with the table in Creo 2.0? The work around is to change the cell state in the drawing.  However, this can easily be overlooked if someone updates the format and doesn't know about resetting the Wrap Text of the cell. Ultimately and obviously, the line feed option is the better option although both should be updated.  With a line feed code, the user can decide exactly where the wrap should occur. I'm not the only one who thinks this was once available.  Can I get some clarification on this? ... View more
See more ideas labeled with:
8 Kudos

Status: Archived Submitted on ‎07-06-2012 04:52 PM Submitted by DanAdler on ‎07-06-2012 04:52 PM
1 Comment (1 New)
In Creo Elements/Direct (CoCreate) when using the <Length> text reference in the callout of a threaded hole created using the Machining command the dimension is followed by an inch symbol (") when a Unified Thread (inch) is used.  Proper practice is that if the drawing is made in inch units that no symbol is given.  It is not currently possible to remove the inch symbol from the length text reference. ... View more
See more ideas labeled with:
22 Kudos

Status: Acknowledged Submitted on ‎07-06-2012 09:04 AM Submitted by lbai on ‎07-06-2012 09:04 AM
3 Comments (3 New)
The dialogue window has not been changed for about twenty years, which is very Unfriendly, no any explanation information except file type. Please learn inspiration from other software ... View more
See more ideas labeled with:
13 Kudos

Status: Archived Submitted on ‎07-05-2012 02:33 PM Submitted by TomD.inPDX on ‎07-05-2012 02:33 PM
4 Comments (4 New)
It is becoming obvious that help for Creo 1.0 and 2.0 is seriously lacking. Many of the references are still using WF references and menu terminology. I have spent days trying to understand something that is right there in front of me only because I tried using the help system that was steering me into oblivion. I recommend a task force dedicated to the help system with full visibility and cooperation of the user community. This effort should provide an easy process to log a problem/oversight and a system providing feedback to the submission acknowledgement. The biggest boost to upgrading the help system must come from the PTC tech support system.  When a call is placed regarding insufficient or inaccurate help data, there must be a mandate to log these issues with this task force.  Help is the UI to the application.  Figures, examples and verbose discussions have waned into obscurity.  A help system should be the front line for the creative process by maintaining perspective and momentum only followed by product support where the help system is insufficient.  This idea is open to changes by anyone. ... View more
See more ideas labeled with:
3 Kudos

Status: Acknowledged Submitted on ‎07-04-2012 04:24 PM Submitted by TomD.inPDX on ‎07-04-2012 04:24 PM
4 Comments (4 New)
The white-ish UI (skin) color of Creo 2.0 Parametric is causing me issues.  It is simply too bright even when turning down the monitor's settings. We need either a few simple UI style options or configurable background and text colors. Should be fairly straight forward. If this is already available, please enlighten me and other users finding this idea. ... View more
See more ideas labeled with:
10 Kudos

Status: Archived Submitted on ‎07-03-2012 03:50 PM Submitted by TomD.inPDX on ‎07-03-2012 03:50 PM
1 Comment (1 New)
Since this discussion came up I thought I would add this here. I want to manage inseparable assemblies as a single part dataset.  Welded jigs and fixtures, for instance, can be designed using common stock but should have the ability to remain unique pieces within the part file. In sheet metal, it is common to add press-fit fasteners that can be created on the fly or inserted from UDF libraries.  These must hatch uniquely in drawings, and if at all possible, maintain the ability to explode on a drawing. In the case of a 3-part fastener, you want the ability to explode said fastener yet not maintain 3 part files and 1 assembly file. I feel PTC is behind the curve on this ability.  Consolidating files can be useful in design management as well as PDM BOM generation when corporate policy does not require, or even disallows part numbering of individual components used on inseparable assemblies.  Capabilities as described would streamline the designer's process significantly.  The assembly tree too would be less cluttered The means of implementations would be a simple toggle added to the "add/remove" material function in feature creation as in "add/remove/separate". New modeling functionality would add bullion functionality so a "tool" can be created with several commands and subtracted from a body at a later stage of the creation process.  One could literally model an EDM tool on the fly and use it to subract the tool body from the main part. Drawing functionality should include the ability to explode the part object when more than 1 solid body exists.  By the same token, the part object should have individual cross-hatching for each solid body. I will add that I am very pleased with the fact that I can now split a body into 2 with a cut in part mode and assembly mode which was a real limitation in the past.  I suggest that this functionality is long overdue.  It is certainly not unique in the industry. I am new to Creo but a long time Pro/E user up to 2000i.  I use the system at a very basic level and have found methods to deal with most challenges presented by the tool and documentation requirements.  This is one I cannot see a way around when it comes to utilizing 3rd party PDM solutions with stringent BOM generation directly from the CAD assembly model.   If I am overlooking concepts developed over the last decade that I am not familiar with, please add this to the discussion.  (and for completeness; I am not in favor of maintaining small clearances between components just to satisfy the limitation) ... View more
See more ideas labeled with:
32 Kudos

Status: Acknowledged Submitted on ‎07-03-2012 03:45 PM Submitted by dhermosillo on ‎07-03-2012 03:45 PM
4 Comments (4 New)
Allow additional columns to be added to the Conflicts dialog box so that Name or Description can be displayed in order to assist the user in identifying what actions to take with models: check out, make read only, continue, etc. ... View more
See more ideas labeled with:
7 Kudos 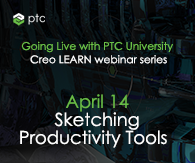