Turned around with Coordinate System

Turned around with Coordinate System

I have modified datums and views for my part and assembly template to use the World Coordinate System.

This was a lot of work.

Last week I discovered that I should have modified a template for MFG_CAST.

On 1st look it appears that it is set up correctly as the CSYS is oriented correctly to our top view and the pull direction.

When this exports out it gets turned around 90 degrees to what it should be.

The only indicator that shows what is actually happening is that the Red, Blue, Green arrows point away from the CSYS.

Would I just need to rotate all the datums, CSYS, views and pull direction to fix this?

Is there perhaps an easy way to fix this? 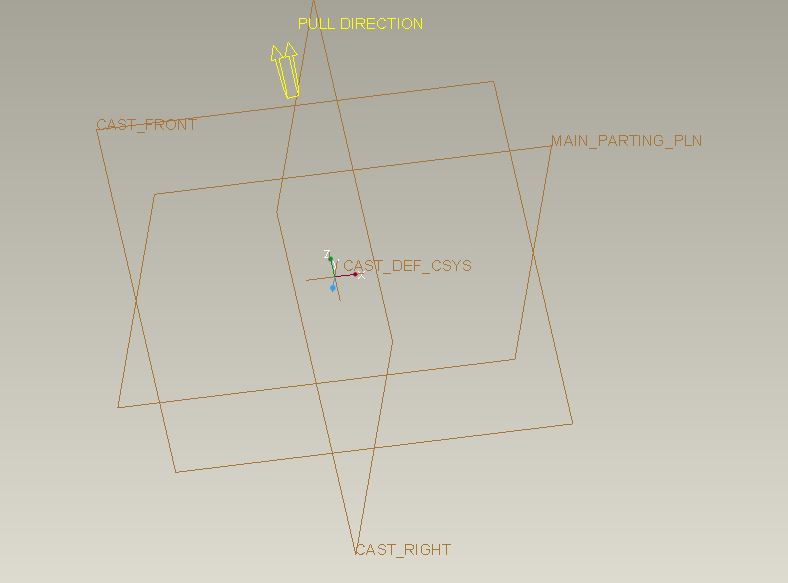 TomU
Emerald I
(in response to pimm)

To answer your question, you simply rename the planes and the views to have them make sense when the Z default coordinate system Z is pointing up (and X to the right). Done correctly, you should be looking at the "back" of the front plane since positive Y is away from you.

If you haven't already done so, I'd suggest you change the following config.pro options.

These will force Creo to roll the model around to Z-up orientation when selecting "default orientation".

pimm
Amethyst
(in response to TomU)

Thanks Tom, I'll give this a look.

I wish there was a configuration option to set datums and views to the World Coordinate System.

TomU
Emerald I
(in response to pimm)

Me too! I've contemplated trying to make the switch at the company I'm at now, but there is an insane amount of legacy data that would forever come in "laying on it's face" if I made the change now.

There are other things affected by this change as well that aren't immediately apparent. One of them is the lighting direction and how things look when rendered. Some of these things can be adjusted. Others I've never been able to get rolled around correctly. Frankly, I've given up. At least for now.

tbraxton
Moonstone
(in response to pimm)

Take this for what it is worth. It may or may not solve your problem in your environment. From your description you can solve the orientation of your export by inserting an additional csys into the model that will be used for exporting using a reference origin (csys) consistent with your design intent. So if you add a csys that has the same origin and orientation wrt to the part geometry as required for import then your import should come in "correctly". This can be implemented independent of the orientation of the part you used to design it, so you should not have to redo any of your work.

When I started to use Pro/E (1994) we migrated from UG and many users were always looking for the WCS which made the transition difficult. Using a WCS is a valid approach and it can be implemented in Creo and Pro/E but requires some planning. Aerospace and automotive systems design often uses a vehicle CSYS paradigm and has it documented and controlled but many organizations do not have this locked down at all.

I don't remember when PTC began including start parts with datums named with view orientations but I have never thought that this was best or even a good practice. Creating datum's that imply orientation in the absence of any geometry is not a good thing. In most environments users model in a manner that they are comfortable visualizing the parts they work on so the orientation varies.

I still use start parts that include default datums (planes, csys, axes) that do not imply orientation of the part. As required one can create a CSYS or datum to support the design intent within the environment. In order to make this manageable I have automated the ability to designate any view I desire as the front and all other needed views are created relative to the chosen front view. Since this is automated it can be changed at any time with a couple of commands (takes a few seconds at most). I work in consulting and get models from many different sources that have to be integrated into a design project. This necessitates the handling of mixed part orientations and references more often than not.

See this thread for a mapkey to set all 6 ortho views relative to the chosen front view.

TomD.inPDX
Peridot
(in response to pimm)

I've run into this before and found it very strange. After some efforts in creating start parts, I finally resorted to starting everything with empty parts. Never had a problem since. 1st feature - cs0; second feature - default datum planes. Proceed with modeling.

Thomas, I definitely need to implement your view creation mapkey. I have a few things to add to get my -true- drawing isometrics as well.

tbraxton
Moonstone
(in response to pimm)

This may help resolve the issue for users that have never built start files from empty files. This part sets the csys arbitrarily and can be modified by the user as desired. I suspect that part of the issue is the fact that start files contain datums that imply orientation of a part resulting in a front datum plane and defined view that is not consistent with user expectations. This is why I am still of the opinion that the default datums of start parts should not in general imply orientation in the absence of geometry. There are conceivable exceptions, however start model default datums should not have names like front, top, right IMO. 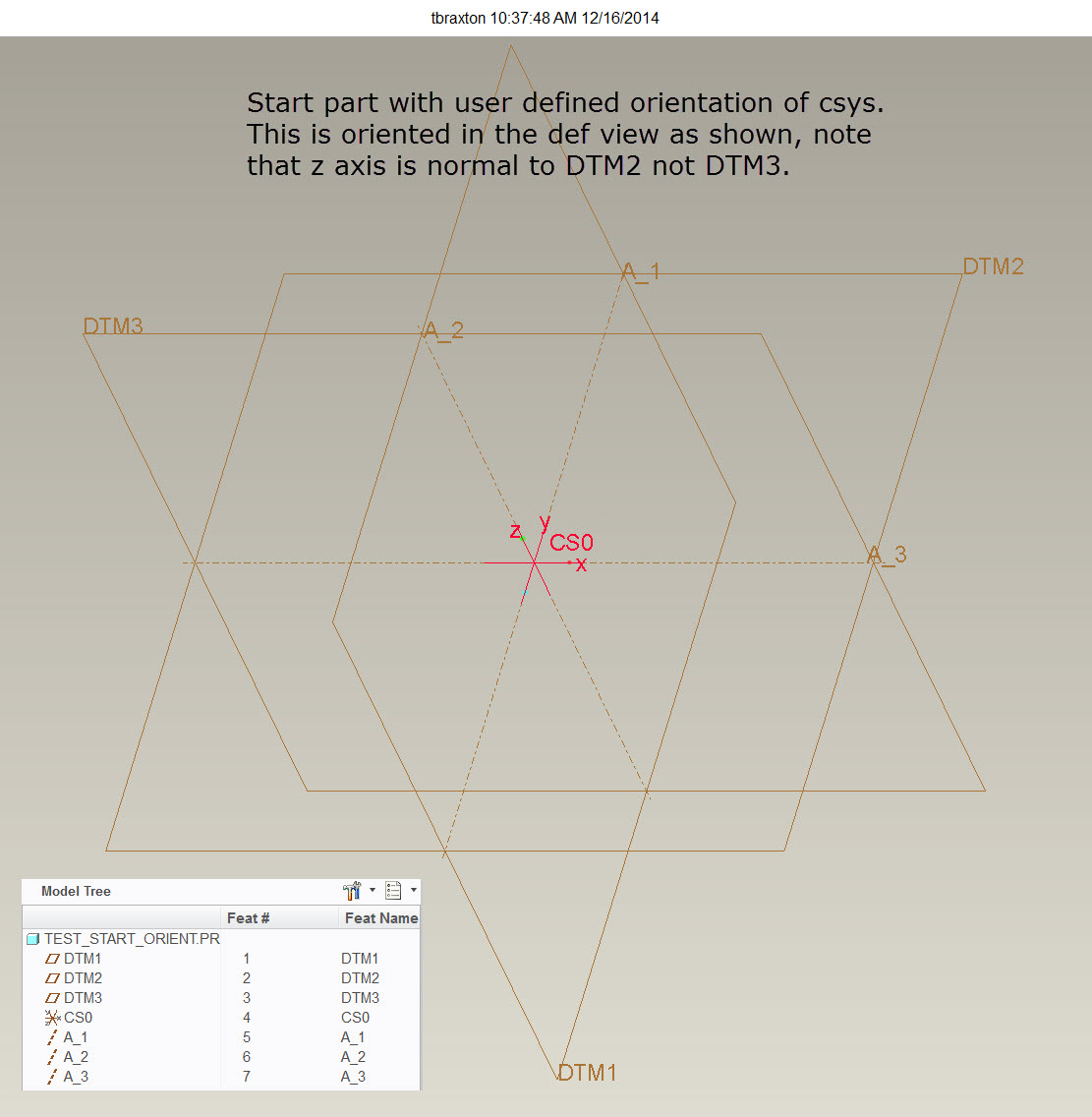 TomU
Emerald I
(in response to tbraxton)

If you really want to see how Creo is going to orient the part (for exporting or "standard orientation"), simply create a default coordinate system. It will always get placed and aligned with the built-in coordinate system. You can't edit it or change it.

Creating custom start parts without also changing how Creo orients the models doesn't help when exporting or importing data to/from systems that use a different orientation (unless of course you're building the models laying down).

tbraxton
Moonstone
(in response to TomU)

Tom. I concur with the facts you present. The user of Creo can not as far as I know define the internal reference frame of the geometry kernel.

All 3D modelers I have seen have an internal reference frame that may or may not be accessible through the UI. It is all relative to the frame of reference in this context of geometry creation and import/export.

Change the reference frame to one of the designers choice for a given task by creating your own (features). I use different csys on native and import data quite frequently and it is part of using CAD. Creo has the functions and flexibility to establish a reference frame of your choice and use it appropriately as design intent would dictate.

One way to think of it is a real world analog of spatial orientation. If you are looking at an object in space and you need to see it from a different perspective you either have to change your location wrt to the object (line of sight) or reorient the object relative to your current position. The view orientation tool in Creo and saved views allow you to view the object from different perspectives but do nothing to alter the internal reference frame of the software geometry engine or any other csys for that matter.

This is done in the code with linear algebra and application of linear transforms based on the designated reference frame (i.e. import/export). You can investigate this using the transform option in the measure tool to obtain the transform matrix between two cartesian frames in the model. I use this often to create a new csys needed to position/orient models that do not have a common ref frame that is usable for design/analysis within Creo.

We have had the discussion before as to how PTC managed the default in the academic version start parts and the production version start parts. The question is, what is the orientation of the Z-axis of the "world" coordinate system. For most of us, looking into the Z axis is the front view with X horizontal and Y vertical. This seems to agree with a lot of software out there as the default orientation. Universal, not by any means... but convention, yes. the default planes created within an empty part too follow the "normal to" +X then +Y, then +Z.

Those of us that do a lot of importing of data know the value of consistent orientations. Although it doesn't make a hill of beans what you call front for many parts, it is good to have some semblance of orientation in an assembly. I work with a lot of parts that "function" inverted to how you would look at it in design. Those types of part, in my view, have no specific orientation. Here convenience wins out. in this case, I decide what I consider a primary orientation which is often considered "front".

As the previous discussion concluded, the top down (looking down along Z and calling it TOP) is a holdover from early CAD where it mimics a drafting board. You "view" is top down and the orientation of the CSYS mimics this. I hope we've come a long ways form the drafting board with today's convention in 3D modeling.

Paul's original image is exhibiting this very observation. The orientation icon is per Z-normal-to-front, and the CSYS is Z-normal-to-top.