It's been challenging, in the absence of OOTB Software Content Management (SCM) system within ThingWorx, to track, maintain code changes in different entities or to roll back in case of any entity is wrongly edited or removed.

Though there's possibility to some extent to compare the differences i.e. when importing back the entities from the Source Control repository in ThingworxStorage. However this approach itself has it's own limitations.

Note : This is not an official document, rather more of a trick to help workaround this challenge.

I'll be using following components in this blog to help setup a workable environment.

First two components i.e. Git & VSCode is something I preferred to use due to their ease and my familiarity. However, you are free to choose your own versioning platform and IDE to review the branches, commits, diff, etc. or simply use GIT Bash to review the branches and all related changes to the code.

This blog divides into following structures

As mentioned you can use any code versioning platform of your choice, in this blog I'll be using Git. To download and install Git, refer to the Git- Installing Git

Setting up the Git Repository

Note: Of course more custom repositories could be created if preference is to separate it from the SystemRepository (available OOTB)

Once Git is installed, let's initialize the repository. If you are initializing the repository in ThingworxStorage and would like only repository folder to be tracked, be sure to create .gitignore and add following to it:

Note : Simply remove the folder/file from the .gitignore file if you'd like that file/folder to be tracked within the Git repository.

Following commands have been issued in the Git Bash which can be started from Windows Start > Git Bash. Then from the Git Bash navigate to the ThingworxStorage/repository folder.

This may or may not return list(s) of files/folders that are not tracked/un-tracked. While issuing this command for the first time, it'll show that the repository and its content i.e. SystemRepository folder is not tracked (file/folder names will likely be highlighted in red color.

This will add all the folders/files that are not ignored in the .gitignore file as we created above.

This will perform first commit to the master branch, which is the default branch after the initial setup of the git repository

This will list all available branches within this repository

This will create a new branch with that name, however to switch to that branch checkout command needs to be used.

To add them for tracking under this branch

Above command will commit with the message defined with "-m" parameter

Now that the Git is installed and configured for use, there are several options here e.g. using an IDE like VSCode or Atom or any other IDE for that matter, using Git Bash to review the branches and commit codes via command or to use the Git GUI. I'll be using VSCode (because apart from tracking Git repos I can also debug HTML/CSS, XML with minimum setup time and likely these are going to be the languages mostly used when working with ThingWorx entities) and will install certain extensions to simplify the access and reviewing process of the branches containing code changes, new entities those that are created or getting committed from different users, etc

To install VSCode refer to the Setting up Visual Studio Code. This will cover all the platforms which you might be working on.

Here are the list of extensions that I have installed within VS Code to work with the Git repository.

This will open the SystemRepository folder which will also populate the GitLense section highlighting the lists of branches, which one is the active branch (marked with check icon) & what uncommitted changes are remaining in which branch see following: 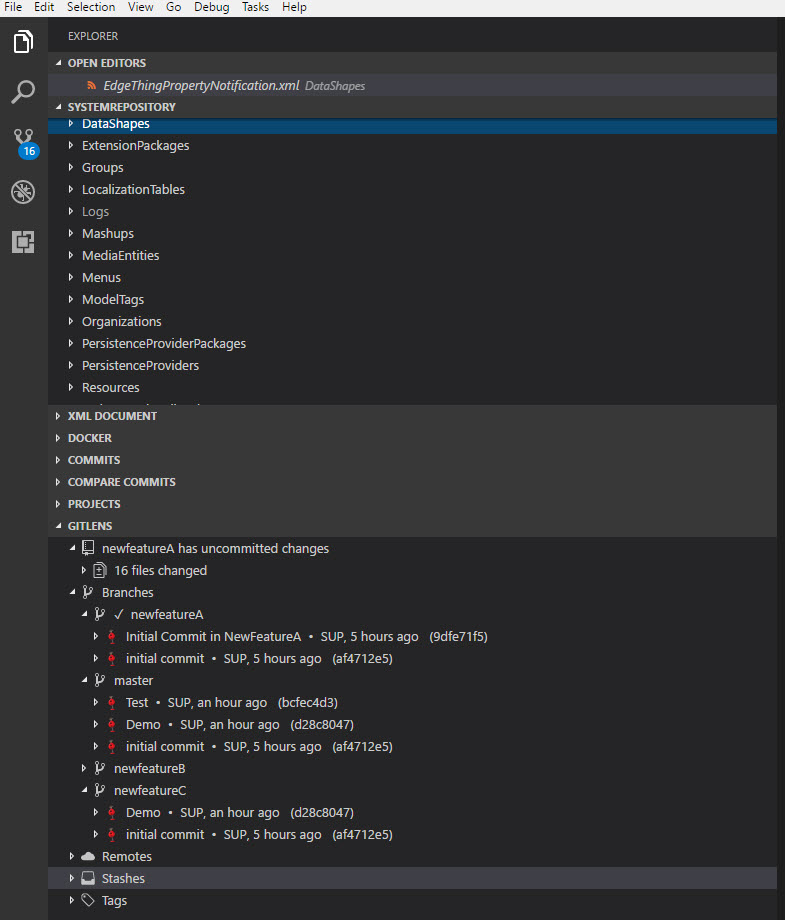 To view the history of all the branches we can use the extension that got installed with the Git Extension Pack by pressing keyboard key F1 and then search for Git: View History (git log) > Select all branches; this will provide overview such as this

3. Creating a Scheduler Thing in ThingWorx

Now that we have the playground setup, we can either:

To invoke this service automatically, a subscription could be created to the Scheduler Thing's Event which invokes the execution of ExportSourceControlledEntities service periodically. I'm using this service with following input parameters :

Service is only taking path & repositoryName as input. Of course, this can be updated based on the type of entities, datetime, collection type, etc. that you would want to track in your code's versioning system.

With the help of the Git tool kit installed in the VS Code (covered in section 2. Installing IDE) we can now track the changed / newly created entities immediately (as soon as they are exported to the respository ) in the Source Control section (also accessible via key combination Ctrl + Shift + G)

Based on the scheduled job the entities will be exported to the specified repository periodically which in turn will show up in the branch under which that repository is being tracked. Since I'm using VS Code with Git extension I can track these changes under the tab GitLens 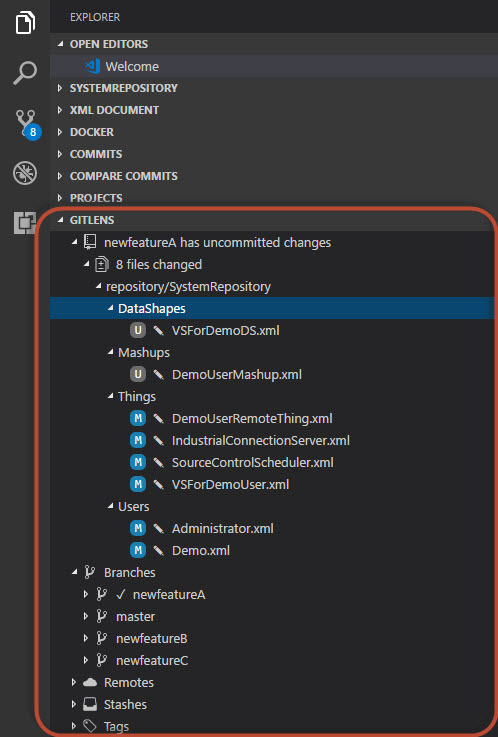 Additionally, for quick access to all the new entities created or existing ones modified - Source Control section could be checked 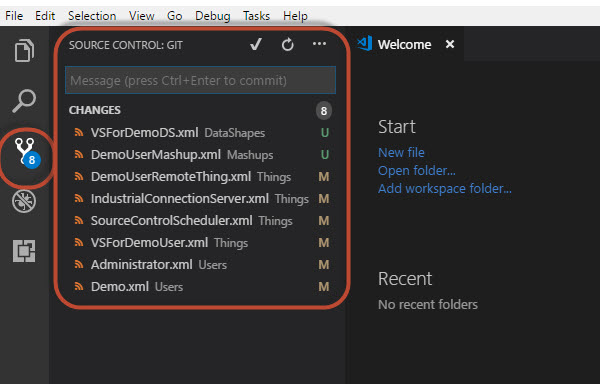 To quickly view the difference/modifications in the entity, simply click on the modified file on the left which will then highlight the difference on the right side, like so 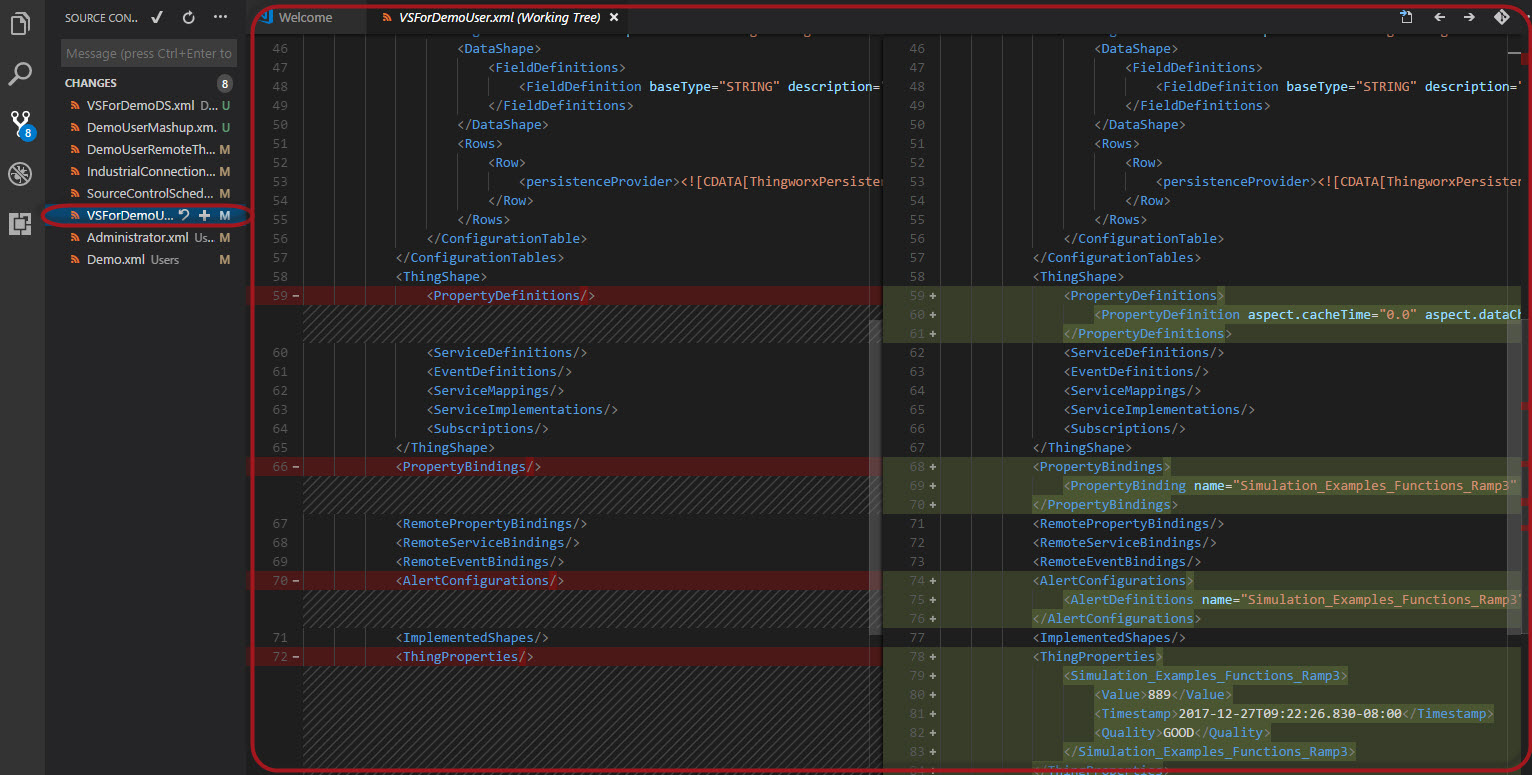 Bedrock
(in response to supandey)

Amethyst
(in response to supandey)

We have used the Template "SourceControlRepository" to create a new repository.

This works fine and we can commit that directory to a git server.
However, when we delete an object (thing) in Thingworx, the export function does not delete the thing from the repository. This is a problem because when we want to import the things, the deleted Things will be imported back again.

Tanzanite
(in response to ehalvordsson)

Appreciate your feedback. I think we already discussed this point under your new question so I hope that helps, if not please feel free to bring that up.

Bedrock
(in response to supandey)

supandey I realize this post is a few years old but have you seen an issue where Thingworx will add leading space characters to the CDATA section e.g. property values, wrapper services in the XML produced by the Export to Source Control Entities? It seems to do in order to pretty print format the XML but it is also changing the value of the properties with these additional space characters and rendering Export to Source Control Entities useless for me.
Thank you again for the valuable post.
0 Kudos
Reply
Announcements