Trying to check in and move the Tetrix KOP library from the workspace to the CAD Models folder... 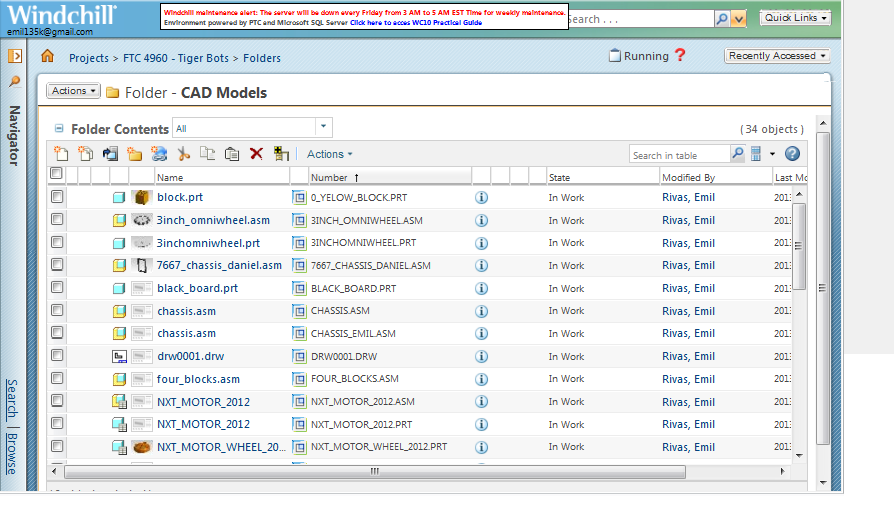 that includes assemblies created by our team. One particular part hangs up the entire process... 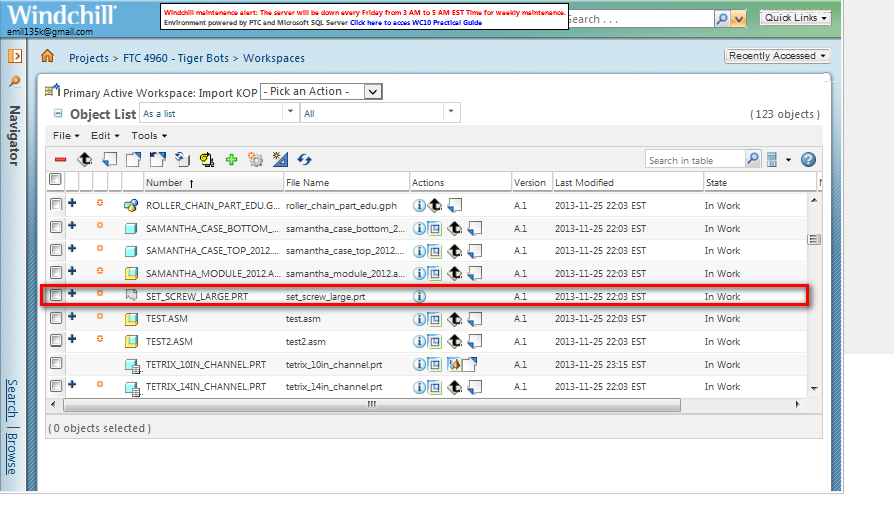 Even when deselecting "set_screw_large.prt" Creo/Windchill still tries to push it up and it fails the whole batch process. Even when trying to delete the component and it tells me that...

"A referential integrity violation occurred for this operation:"

What a nightmare its a catch 22 situation, where one corrupt file hangs ups the whole process. It seems to be a single point of failure at its worst. Any chance I could share access to the Windchill workspace to have someone at PTC figure out this corruption issue? Are there any "Plan B Zapinator" functions for this wretched file?

Just as I was getting pumped up and excited about using Windchill after viewing the recent Robotalk Webinar on Windchill, I have been shot down in flames at the first step of the process!

Guess we have a case of a set screw jammed in the cogs here and has brought everything to an abrupt halt :-)!!!

Please take note that, I am brand new in these CAD/PLM issues as well.

I have felt your frustration. Please, read on.

The simplest approach is to create the missing part and save that to the workspace. The ghost object may be the result of an unverified family table - find the assembly that uses the part, find the family the part is in, verify the table and save the Generic and away you go.

Also, try moving a few parts, then assemblies. While WC can handle more than you can likely create to throw at it, it is less frustrating to work through the operations that work and then develop the debugging skills required on the few that remain.

It's been a while since I've seen these Ghost parts - I think there are settings in the Windchill interface to deal with them automatically, but I think you're using WC10, which I've not gotten to.

This frustrating thing about WC is, in particular, a good thing. WC is designed to only work if everything is correctly referenced. Which makes sense for the billion-dollar companies that depend on it. The result is that WC has a large number of checks to preclude bad data from getting in - where it is much harder to deal with.

To most users, though, this comes across as an unexpected pie in the face. A concrete pie. Because not only will WC sometimes give no response, and sometimes gives a useless response, it never gives a suggestion as to how to fix it.

For example. I have copied a family table to a workspace with entries for all the members. To make sure there is no accidental change to items I don't want changed, I set their workspace status to locked. When it becomes necessary to make a change I open the Generic, unlock it, and it quietly refuses to change anything. I check it out - OK - still no changes. Because the instances are still locked. No error, no hint, just refuses to change anything. It's not the behaviour I would like it to have. Unlocking the Generic should unlock all the instances, just as checking out the Generic should check out the instances.

The reason for locking? Some instances have features that force them to regenerate when they are retrieved, which marks them as modified, which means they get saved with the assemblies they are in. I don't want to bump the version of the items that I don't meaningfully change, so I would have to undo the checkout on the instances (based on a preference to check out things ProE/Creo thinks need checking out) which takes time. Locking them prevents the modification and the checkout.

Sorry to hear you are having problems.

The ghost files (grey, torn sheet of paper icon), are created when a part or assembly references something that no longer exists. Usually this is just a mistake made by a designer, but sometimes it's due to a renamed file and there is a residual reference that keeps creating the ghost part.

The easiest way to handle this is to first delete all ghost files. You can sort by the column with the ghost part icon by hitting the grey box on top of the column, so all the ghost files are together, then just select them all and hit delete.

Next, select your files and hit "check-in".

Set the appropriate folder, then hit "next".

In the last stage of check-in, you will check the box for "Auto resolve incomplete Objects".

Finally, select "Update with object on server, then Ignore", and then "Finish".

This should kill all ghost parts and they "shouldn't" come back. 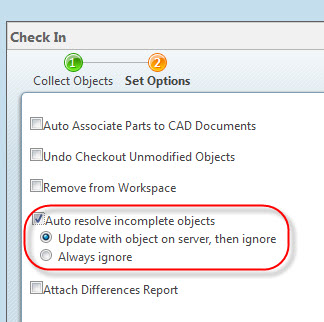 Thanks for your feedback. In reference to...

The simplest approach is to create the missing part and save that to the workspace. The ghost object may be the result of an unverified family table - find the assembly that uses the part, find the family the part is in, verify the table and save the Generic and away you go.

How would I find the assembly or part that uses it? Is there a tool for it or is it by hunt and peck? See there are alot of parts since I am collecting the entire Tetrix Kit of Parts. Are there some is there some query tool that can work backwards from the rogue part to the assemblies it thinks it belongs to?

I like Josh'es clean and simple suggestion, but the problem is that Windchill won't allow me to remove the object :-(.

Is there some special way of deleting the ghost file other than using the delete object from within Windchill? I tried that and it won't delete it.

If it hasn't got a family, then just create a part by the same name as the Ghost object and save it to the Workspace. It doesn't need any geometry - just be a part file. If it is in a family table, open the Generic and then Tools/Family Table/Tools/Verify -OK, and then save.

Tried creating a new part by the same name, didn't help me either. I just selected all files from the workspace and deleted them. Odd enough, I couldn't delete the part by itself but when I selected all the components and told it to delete the objects, it took them all out. We must be in the corruption Twilight Zone :-). I will try to create a new workspace from scratch without that part included and see how it goes.

Sorry to see you are having problems. Which set of files did you download? I grabbed the most recent Tetrix and NXT from PTC's site. I had some ghost parts, but was able to delete. Your situation where the ghost object can't be deleted is a little more challenging. Make sure you're attempting to delete before attempting to check-in.

With this scenario, you'll have to delete the references from within the model that they're associated to. There are a couple ways to do that, but this is one way.

1. Select the ghost part and then select the details or "View Information" icon (blue "i").

2. Select "Related Objects". Open the part that shows up.

a. (If no other part shows in the "Related Objects" tab, we have more challenges)

3. Right click on the assembly in the "Model Tree" and open the "Reference Viewer" 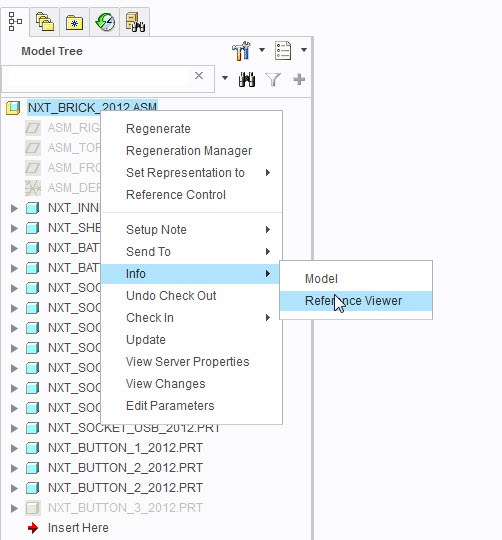 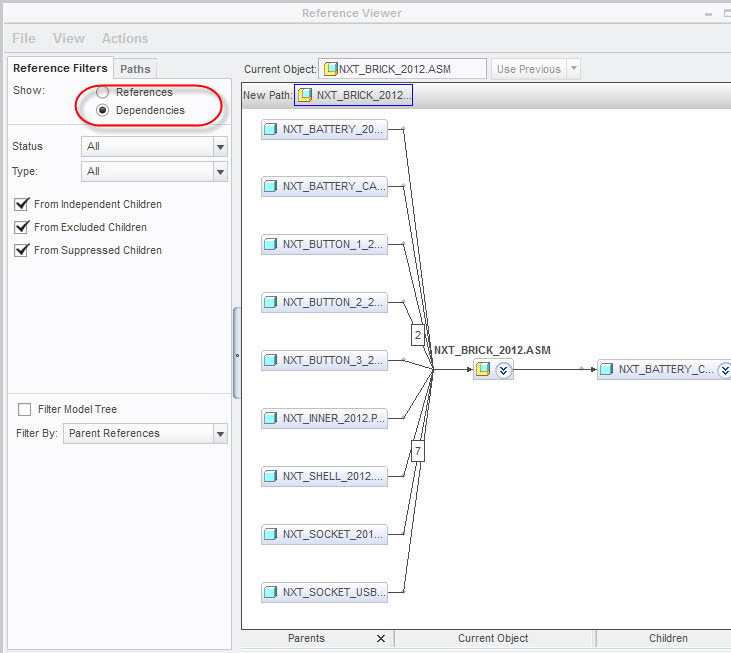 The part information window should list the item that needs that referenced item.