Students from schools across the region gathered March 30th and 31st at the University of Minnesota’s athletic complex in Minneapolis for this year’s FIRST (For Inspiration and Recognition of Science and Technology) regional robotics competition. This year, students competed in a mechanical basketball shootout in an event called the Rebound Rumble (See Pam Vermeer’s write up below for details on the competition).

The Thursday before the competition, a number of PTC employees participated in the set up for the event, transforming the University of Minnesota athletic complex into a playground for the Rebound Rumble. The set up of the course must be done very carefully, as all of the robots have been designed using precise measurements according to the initial game requirements presented during the Rebound Rumble kick-off in January. 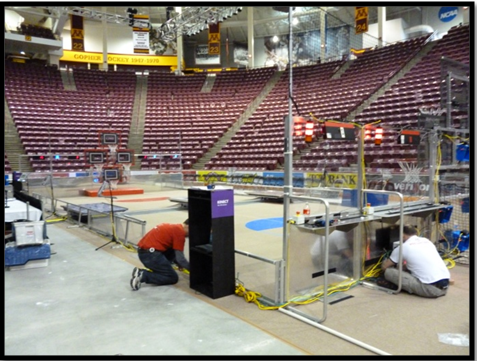 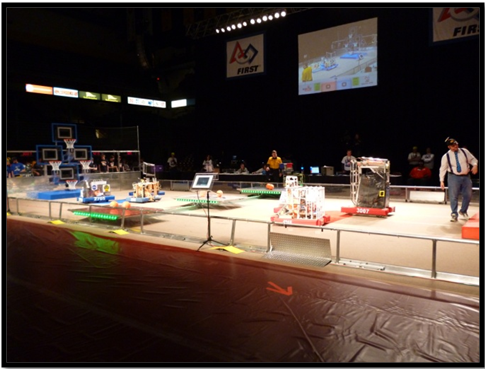 The teams had six weeks to design and build their robots before loading them up. When they arrive for the competitions, the robots are waiting for them in the pit. The students have a chance to do maintenance and perform a test run on a mock hoop and bridge in the pit before the competition starts. The excitement and anticipation is high as mascots, mentors, and student participants prepare for the competition to begin.

The atmosphere at a FIRST event is incredibly energizing. The professionalism of the kids is striking; they fight to win, but also cooperate and come together to help each other with the robots they’ve spent six weeks designing and building in preparation for the competition. One of the core teaching points of the FIRST program is building gracious professionalism. Teams help each other in the pit (the area where maintenance and team preparations are made), so if a team is in need of a part for their robot (tape, a bolt, etc.) there is a place to go and make an announcement. Teams instantly respond to these announcements by rushing to provide the needed piece.

A View from the Stands
by Pam Vermeer, PTC Software Development Engineer.

After volunteering to help set up the arena for the FIRST regional competition in Minneapolis, I was intrigued enough to stop by to watch the finals of the competition on Saturday afternoon.  My intention was to watch for an hour and then head out to my other Saturday errands, but I got so involved in the excitement of the competition, I couldn’t leave until the end!The set up was a basketball court with four baskets on each end.  The highest basket was worth 3 points, the two that were hung side-by-side below it were worth 2 points each, and the lowest basket was worth 1 point.  In addition to the traditional basketball court, there was a bumper in the middle, and three platforms on the bumper – one on each end and one in the middle.  These platforms could tip to either side of the court, and could also balance on the bumper.

Each team consisted of three robots who worked together to earn points.  The winner of the round was the team with the most points at the end of the round.  When I started watching, the field was down to eight teams. A team had to win two out of three rounds to move to the next stage of the competition.

Each round of the game had three point-gathering opportunities:

Another fun component was watching the creative ideas the teams had for how to optimize their team’s chances to get to the finals and win their way to the world competition.  One robot I saw didn’t shoot the basketball.  Instead, it had a lift that raised the balls higher than the 2 point basket and rolled them in.  If they could get balls loaded and the robot lined up, this was a sure-shot scoring technique.

Another robot was a purely defensive and platform-balancing robot.  The Alliance it was on had two other robots that were very reliable at gathering balls and shooting, and this robot charged off to the other side to push the other Alliance’s robots out of shooting range, or just generally get in the way.  Near the end of the competition time, it moved to the Alliance platform and facilitated another robot from its Alliance to get on the platform.  It then earned 20 points every round by getting on the platform and balancing.  It took a lot of guts to create a robot that could only gather points by getting on the bridge. It did that and its defensive job so well that it was selected to be part of what turned out to be the winning Alliance.

Beyond the creativity of the robots, the environment was fun, and the competition was exciting.  There was a lot of strategy involved in each match, as teams had to decide whether and when to go to the platforms to balance, which was worth a lot of points, versus continuing to shoot baskets on their side, versus playing defense on the other side.  Music was playing throughout the competition, teams had mascots along who were dancing and cheering, and kids and their coaches, mentors, and relatives in the stands were cheering on their favorite Alliances.

It was really a fantastic afternoon watching some excellent competition, seeing kids positively reinforced for using their minds and creativity, and knowing that the company I work for is a part of making this event happen!  I highly recommend you take the opportunity to attend in the future, and hope you enjoy the atmosphere and the competition as much as I did.

Nice write up!  I hate to say it, but I'm woefully lagging in my own report of the inaugural Central Valley FIRST Regional event!

This was my first time volunteering at an event and I got a double-whammy by being on the committee for this new regional.  I'll just add one of my own teaser photos

Below is a shot of triple-balance in the foreground and a double-balance of two PTC-sponsored teams, 1671 and 3970 in the background.