Thanks in advance for your time and help.

Maybe depends on which mathematician you ask...

Mathcad 11.2a, with the good old Maple machine, sees them as identical, given the right settings: 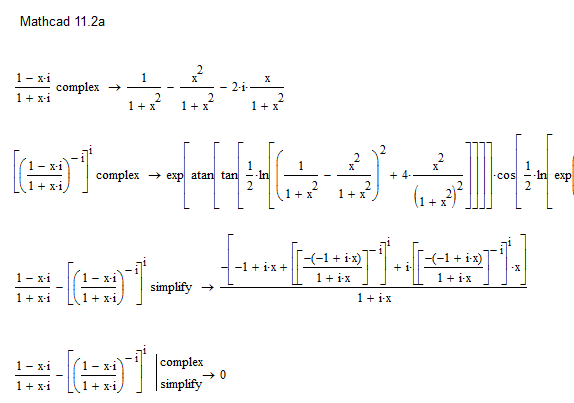 Note that the complex expansion of the second term alone is several pages wide.

The first expression is just one of an infinite number of results of the second one.

Try thinking of it as (a^b)^c) and see where the power product gets you.

(a^b)^c = a^(b*c) is true and unique for reaI numbers only! I think LoiLe is exactly doing that and is wondering, why Mathcad does not simplify the right expression to the left one.

A number to the power of a complex is not unique as I wrote above but there rather are an infinite number of results. I already elaborated on this a couple of times at replies to other posts of LoiLe but he seems not to be willing to acccept that fact. 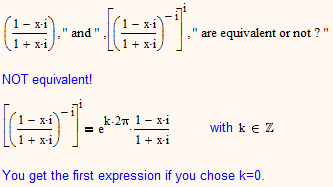 I am also wondering, but for different reasons:

It looks on first sight that MC is considering the ambiguity of the expession and is therefor not simplifying the expression on the right by simply multiplying the powers to 1.

But then MC should yield "all" infinite results at least when formulating the expression as an equation and using modifier "fully", but it doesn't as shown in the first example below..

Also 1^i is not unique but MC simplifies it to 1 this time!?? (second example below). 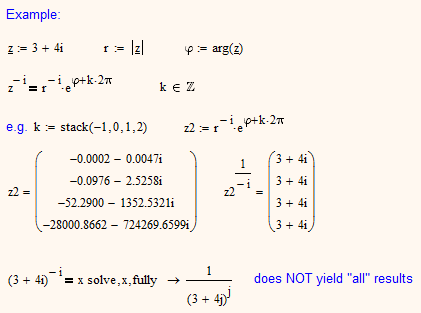 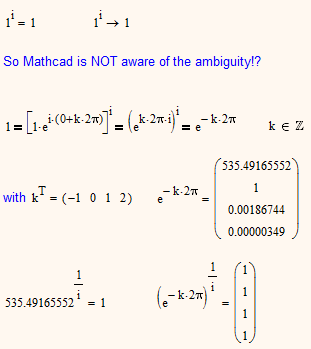 Maybe depends on which mathematician you ask...

Mathcad 11.2a, with the good old Maple machine, sees them as identical, given the right settings:

Note that the complex expansion of the second term alone is several pages wide.

Not if you add "simplify" 😉

Maple sure is the more capable symbolic package and I guess we all miss it in newer versions of Mathcad.

I guess that MC15 is NOT aware or at least not considering the ambiguity of the expression but simply isn't capable enough to simplify the equation.

It seems that both versions of Mathcad try to make the expression unique by implicitely setting the k in my calcs to zero. I am not aware of any mathematical convention for that (which may not mean much) but it sure makes sense and is done that way by most other math software as well. But using MC15's

we should sure get a different result. Try it in MC11 (you can't use fully there) without and with "complex" and you get z resp. "no solution".

So it all depends on what definition of exponentiation we would agree on.

It may be considered as a similar behaviour as in

where Mathcad defaults to the principal root (and that already often was a cause for confusion here in the forum). As sort of compromise Mathcad provides the root operator which defaults to real results.

As the exponent here is real and rational obviously only three consecutive integer values for k make sense (MOIVRE), so we can chose 0,1,2:

Mathcad again has chosen k=0 which in case of a rational exponent yields the principal root (value with the smallest positive argument).

Thanks for all your help , WE , PhilipOakley , and Luc .

Luc , I wish see screenshot of show-up of your MCad 11.2a for the following , because with my Mathcad 14 : 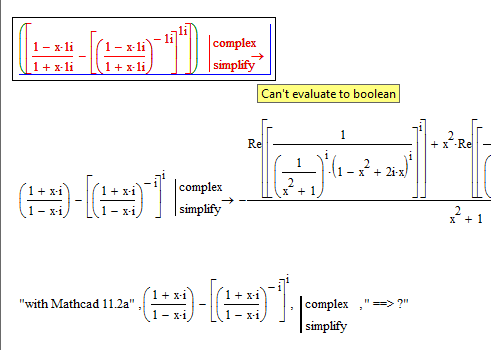 The pic I supplied was already a screenshot.

But here is the detail: 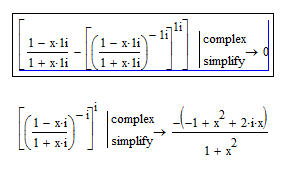 And I also added the simplified expansion of the second term.

from the one that Mathcad 14 uses (Mupad). That may lead to different results, I guess this is one of the examples.

I greatly appreciate your help, Luc. 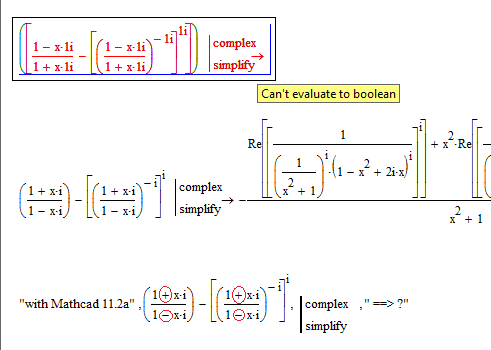 Ah, missed the sign-change. Sorry about that. 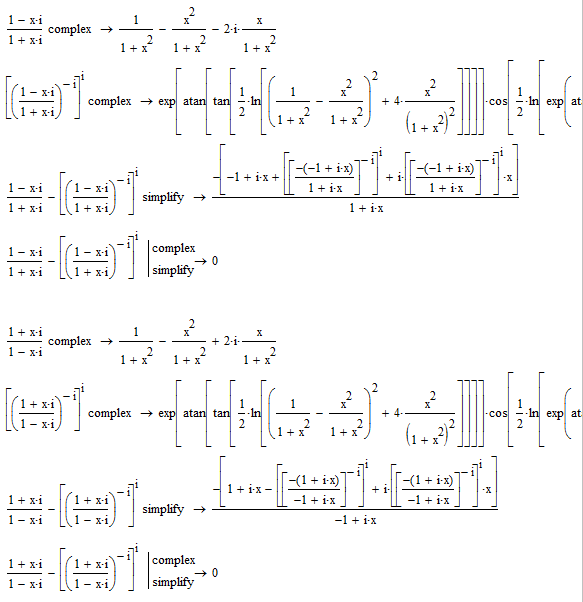