Noticing in Prime Express that evaluating a function name yields a string, ...

I was wondering if anybody knows of a way to save that string to a variable?

(This is something that I asked for since about Mathcad 11 - it would have been quite handy to have when, say, evaluating a list of functions or identifying a function that's stored as an array element)

Emerald I
(in response to StuartBruff)

Unfortunately the variable 'a' is NOT a string, as shown by:

(Complains that "This value must be a string")

Instead, a is now (also) the sine function:

Note: This works the same way in Mathcad 11:

Peridot
(in response to LucMeekes)

I already tried your suggestion, even though I knew it wouldn't work (otherwise assigning functions to names wouldn't!!), but I was wondering if there was some operation that would do the job, eg, something along the lines of converting a range variable into a vector, ... 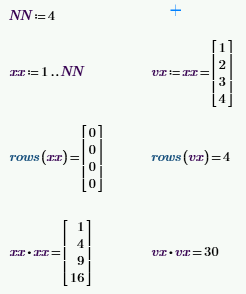 Sapphire III
(in response to StuartBruff)

You might be able to do it in a program

Constrained to Express, I can only speculate. . .

Peridot
(in response to Fred_Kohlhepp)

I hope it doesn't work! I frequently use(d) that particular form to generate and return constructed functions.

I've even used it within a program to iterate through a vector of functions to, say, compare their relative performance.

What we could possibly do with is a general purpose, Str(x), that converts its argument into a string regardless of of the argument's type. I wrote a version of Str that 'stringified' not just numbers, but also arrays as I had a need to exchange the data with another application, and also to be able to manipulate the data in its string form.

Unfortunately, I couldn't find a way to get Mathcad to return a string from a function.

Although having said that, I vaguely recall having found a way of doing it in M15 by playing with the xml. I might try finding my old M15 licence details ...