I would like to send this data to Creo, to create a 3D Model, is there a way to do so?

Topaz I
(in response to idanila)

Hello Ioana, I did everything I could do. With the data available, in fact, I could not do much. In the picture I give you some suggestions. 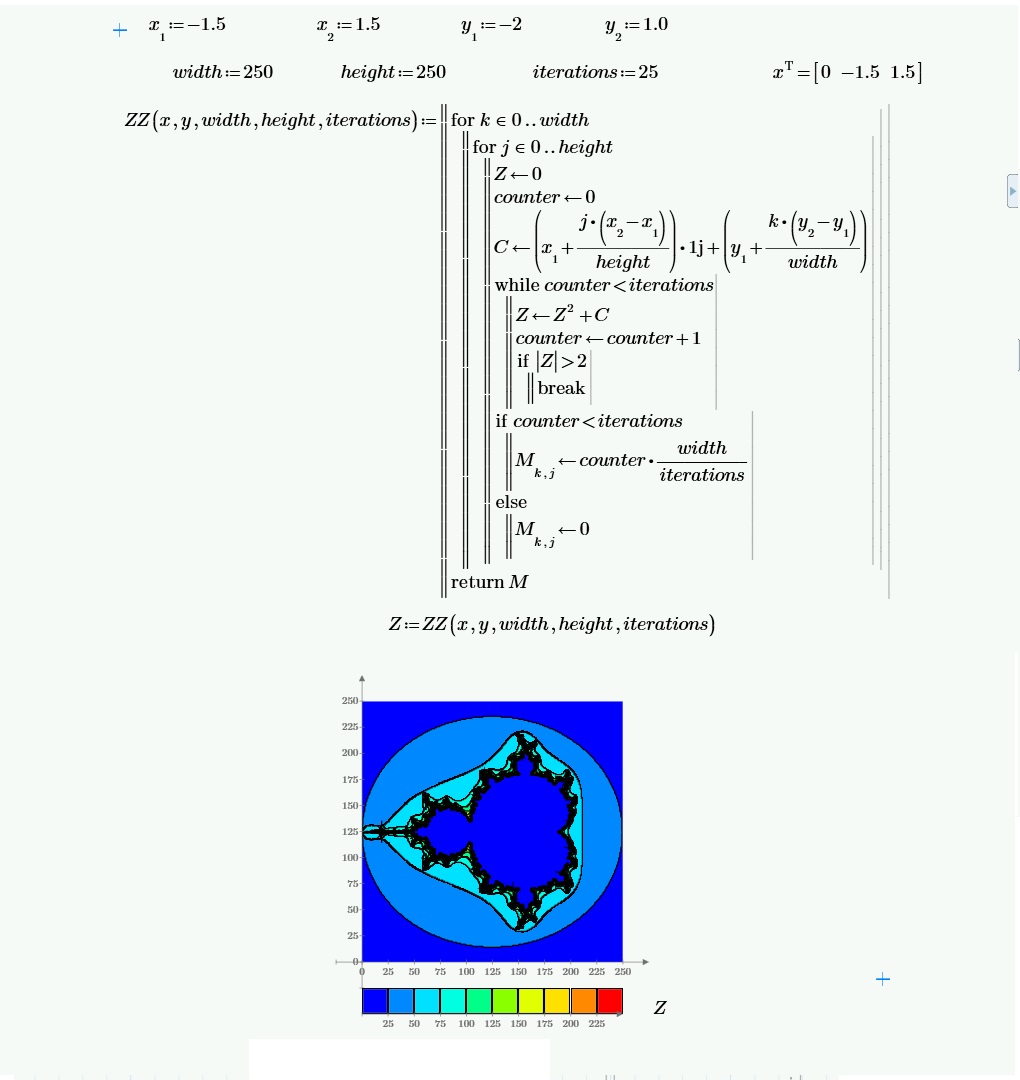 Please find in attachment some examples of creating fractals.

Regular Member
(in response to VladimirN)

This Mathcad Prime worksheet can be found in attachment as a PDF document for a preview (for those who have trouble with opening Prime 3.1 worksheet).

Ruby I
(in response to idanila)

Ruby IV
(in response to idanila)

> I would like to send this data to Creo,

Which data?? The sheet you posted is faulty and unfinished. It does not create any data!

Here is, following the lines you provided, a solution in Mathcad 15. In Mathcad 15 we have a picture operator and so we can immediately see the result of our calculation (as you provide only one value per point its just  gray-scale image.

In Prime you can just save the image using the WRITEBMP command (as shown in the picture) and display it externally. 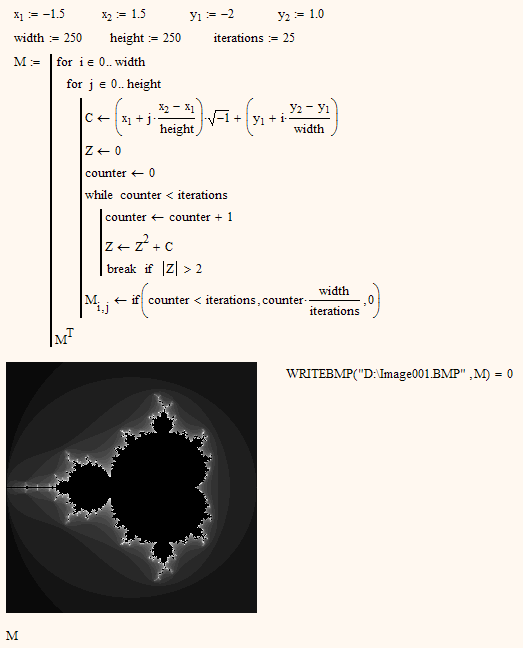 The Matrix with the values can be exported in a couple of different formats, if this helps importing them in Creo.

In Mathcad 15 you could also create a 3D-Plot or a Contour-Plot using the very same data matrix and color it using a colormap of your choice. 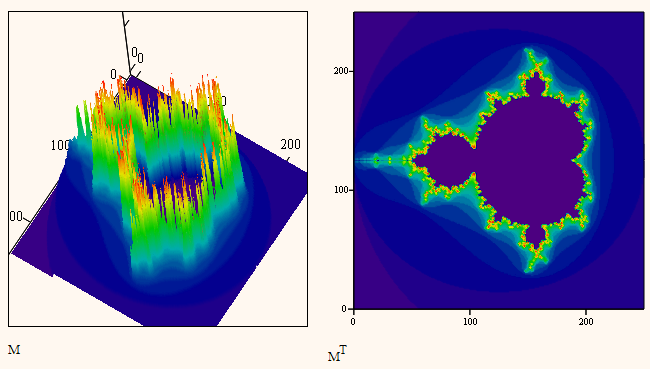 Regular Member
(in response to idanila)

Initially, I have been inserting by mistake the wrong worksheet. Here is the one I meant, sorry for all the trouble.

One more thing: In order to send it to Creo I would need Prime 3.1, and moving from MC15 to Prime can be harsh sometimes, since some of the old functionalities have changed and get lost during conversion. I will try to see if it works with bmp first.

Thank you all for your responses!

Ruby IV
(in response to idanila)

> and moving from MC15 to Prime can be harsh sometimes

you mean that there are times when its not harsh? 😉

> I will try to see if it works with bmp first.

If you just want to transfer the data, generating an Excel file, a CSV file, some other binary file type or even ASCII might be a better way to exchange the data.

Aquamarine
(in response to Werner_E) 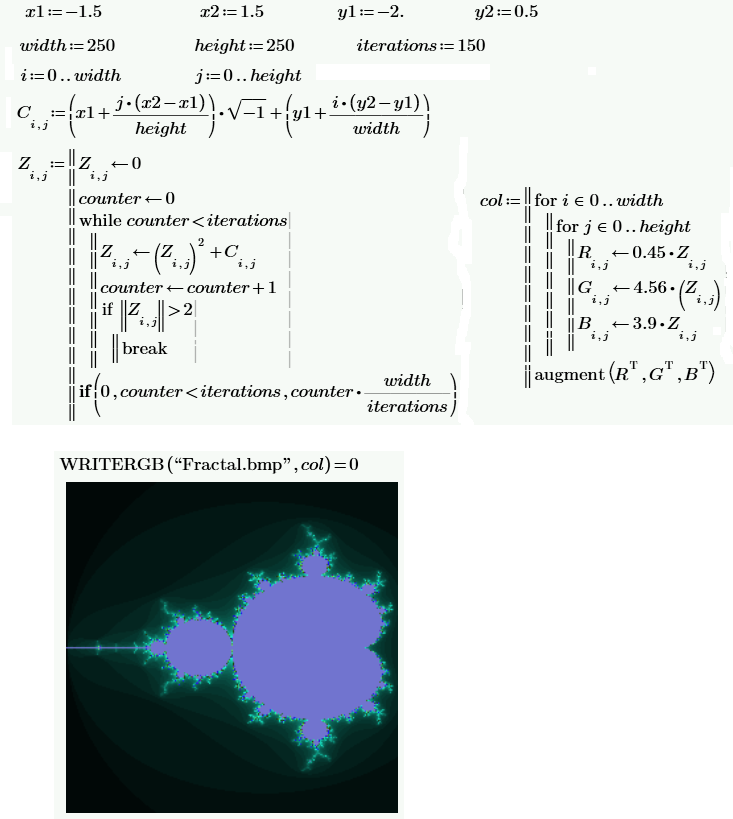 Ruby IV
(in response to ViktorKorobov)

Not sure if this is better suited to input the raw data into Creo, as was initially demanded. Don't know Creo, so I can't tell.

Guess you mixed up the order of the arguments! Zero should be the last one, not the first. The way you have written it, the first argument is evaluated and is always false (0). So in every case the last expression is chosen. You don't get 0 for the inner area that way.

Moreover it does not make much sense to make the value dependent on the width. Either use counter or counter/iterations on its own and let Creo do the rest or replace width width in that expression for the maximal color number in use (255).

In attachment can be found the worksheet that record matrix data into STL file format as a 3D model, which can easily be used later in Creo Parametric. But I have at the last moment of calculation when writing STL file the following error - "Not enough memory for this operation". I test it on Win 8.1 x64 with 8Gb of RAM. Can someone please check it? 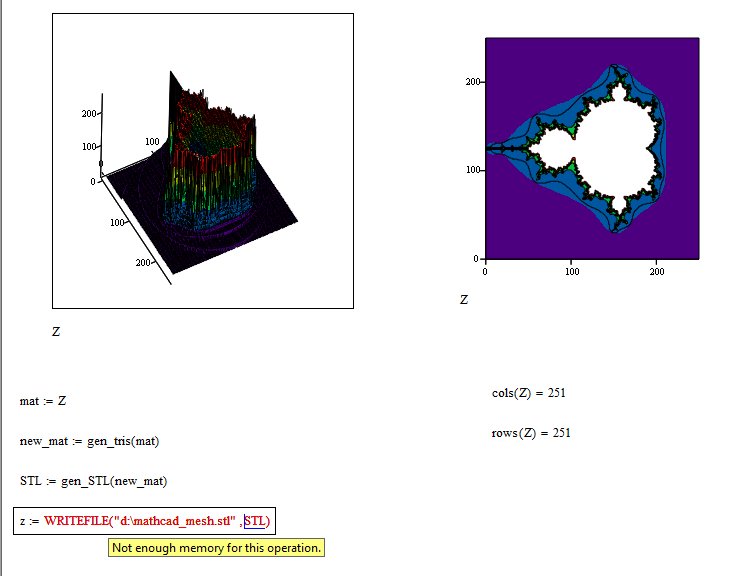 Aquamarine
(in response to VladimirN)

Peridot
(in response to VladimirN)

As covered below, it looks as though the STL matrix is large enough that converting it to binary puts it near some memory limit.  Predefining the binary vector size seems to help, although not consistently.  I suspect that it would be better to use binary STL rather than text for a file of this size.  I would be interesting to see if Prime could handle the conversion to binary without problem (it should). 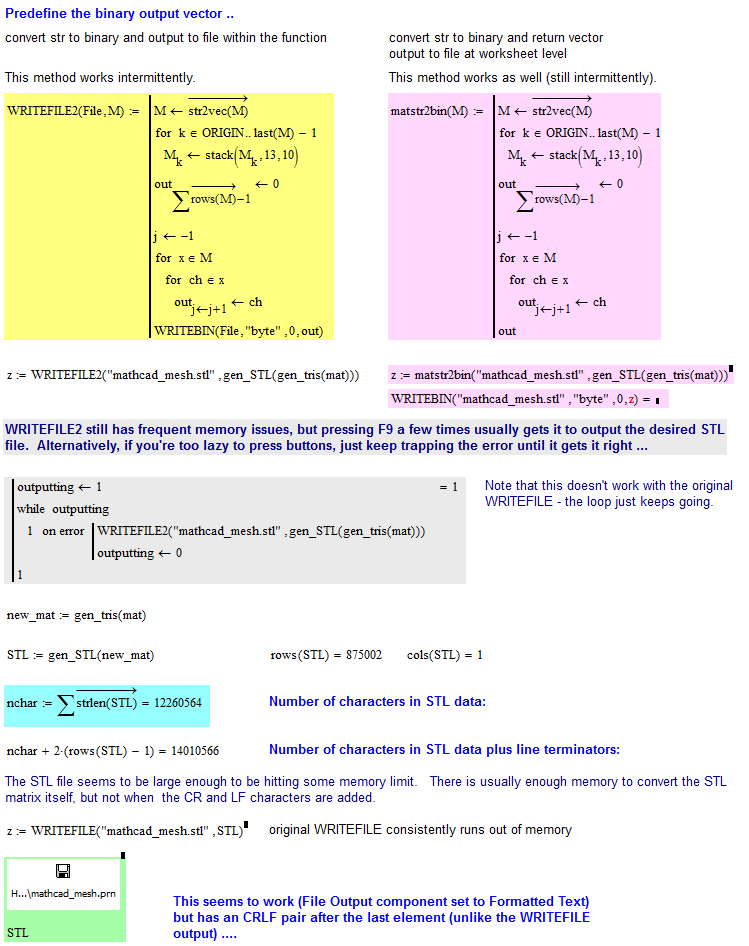 Peridot
(in response to StuartBruff)

Both the WRITEFILE2 and File Output component (.prn) STL files render seemingly correctly on the STL viewer (neat!) (and after renaming the .prn file to .stl).

Emerald II
(in response to StuartBruff)

Thank you for investigation.

Regular Member
(in response to idanila)

Last week I also continued to play with Mathcad and Creo in order to create a 3D fractal model to be 3D printed later.

It may sound harsh to transform a matrix of 300 rows into a 3D-converted readable, modifiable graph but not quite as harsh as it really is. And interesting!

There were many ideas, one of them being to make a matrix of 3 strings with those strings containing some informational values from the given function, another one was to write a .stl custom function,  and other ideas such as these 2 that were driven by the Community responses to my proposed question:

After trying to create a STL file from Mathcad Prime 3.1 that I saw to be possible, according to this Demo: 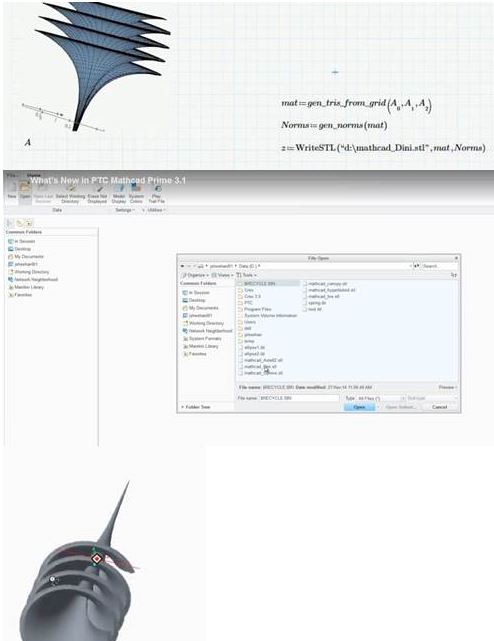 I found out that this customized function would require a .dll with background programming so I skipped directly to this life saver tool that converts 2D images in 3D objects, aka .stl files. 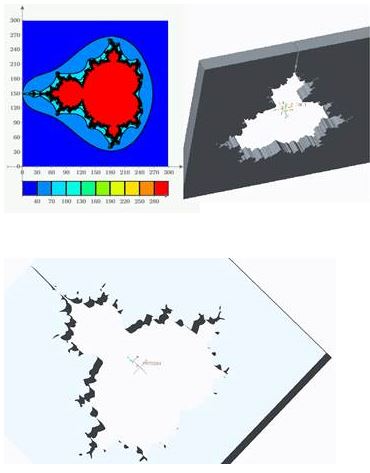 After transforming it, I still had some more steps to do - to make it solid, in order to extrude it afterwards.

Some of the steps, if anyone ever interested, can be found here: https://www.youtube.com/watch?v=ho-t5OgEbJY 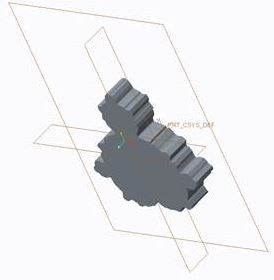 that is set at a level that contains not too many details, because otherwise, when printing, it would be very messy and many of those details would be lost anyway.

After some finishing strokes, I moved the part through MakerBot, that transformed as you may now see below: 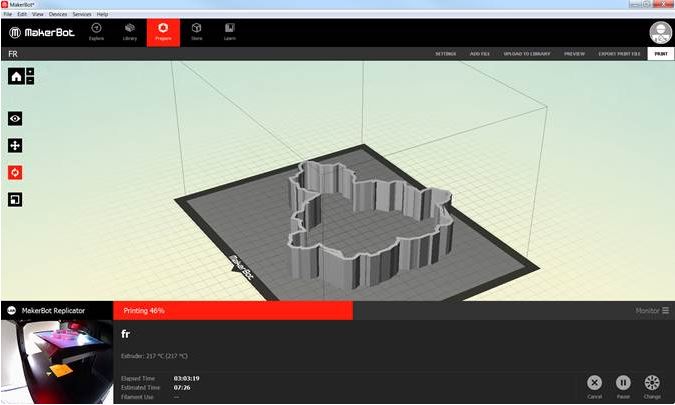 And the tangible result: 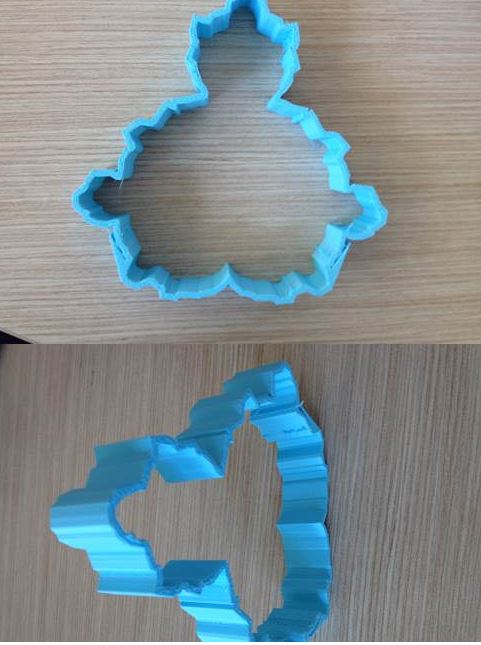 As I have previously mentioned, this was a personal project, resulted from both my passion for fractals (there are even college classes about them nowadays) and because I wanted to verify if we can create a Model/Part that uses big data (sort of) with the Mathcad-Creo Integration.

As so I have seen it works!

Other interesting 3D printed models can be found here:

I have also printed 2 of them the other week: 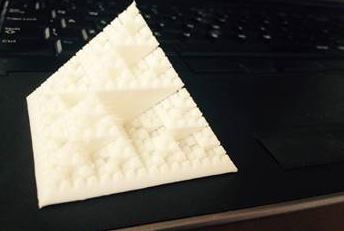 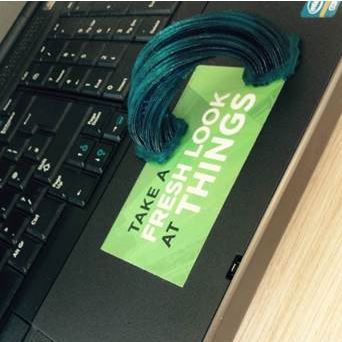 Continue in the same spirit!