How can I express matrix?

Ah, you mean something like the attached? Note the use of nested arrays to hold all of your data - get at each 'table' by indexing as you would normally. I gave the definition of seq in another message - or you could import the attached M14 worksheet. 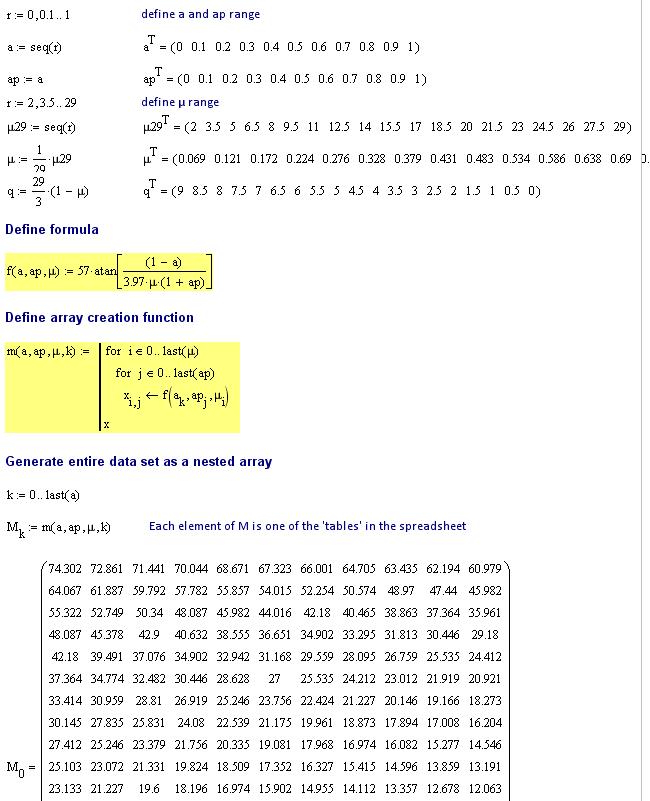 I am not sure why this reply of yours is the correct answer, but as long as you are happy we should be so, too, I guess 😉

Just to round things up: In the initial posting of yours you showed a picture of a function with three arguments and you called it with the third argument mu as a constant (2/29) and the other two argument as ranges with 9 "elements" each. You wanted the outcome not to be a list but a matrix, which obviously could only be the 9x9 matrix.

Now you attach an excel sheet, where you show a different function (its yours multiplied by 57) and different ranges for those three variables (a and a' run from 0 to 1 and mu also up to 1). So we see 11 tables one after the other, where a ist constant (not mu) and mu are the rows and a' the columns. So thats 11 19x11 matrices you seem to be looking for. Quite different from what you had asked at the beginning, isn't it?.

Its easy to create that structure with Mathcad, too (with ranges or vectors as arguments, whatever you are accustomed to 😉 But the question still is how you would like those matrices be presented. Two possibilties come to my mind - either a (nested) vector consisting of the 11 matrices, or a big n*11 matrix, where all 11 matrices are stacked one on top of the other. Her you would need some sort of divider, maybe also row and column headers, otherwise it would be just a big mess.

Which appraoch is better or appropriate depends on what you will use those tables for.

You former questions suggest that you just want to look up some combinations of values where the table value will exceed a certain threshold. If thats true it might be a better idea not to show those tables at all and let Mathcad do the lookup and just present you with the results.

Anyway, the following might help, but maybe it doesn't.

First we create a function which tables a function with three arguments, so that the result is a nested array consisting of a vector of matrizes. Ever of those matrices shows the function values whith constant third argument z and x as rows and y as columns. 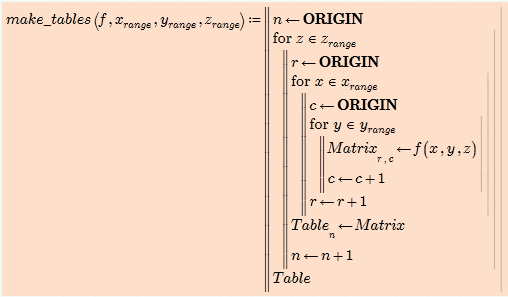 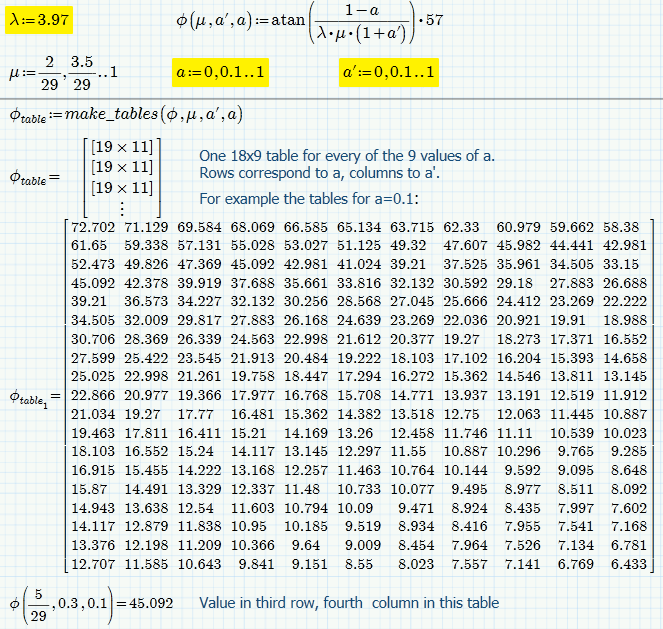 You may also use the same routine with vectors:

The benefit of using vetcors is very small to none here. Unfortunately Prime does not allow it the more easy and natural way. (Did we already asked for multidimensional arrays?)

Attached will create your table.

It's possible to make life a bit easier by using a redefined matrix function that can take vector inputs for m and n. Given that we have a three-argument function, then for a fixed value of one argumen, we can create an auxiliiary two-argument function and apply the new matrix to it and the remaining two arguments. 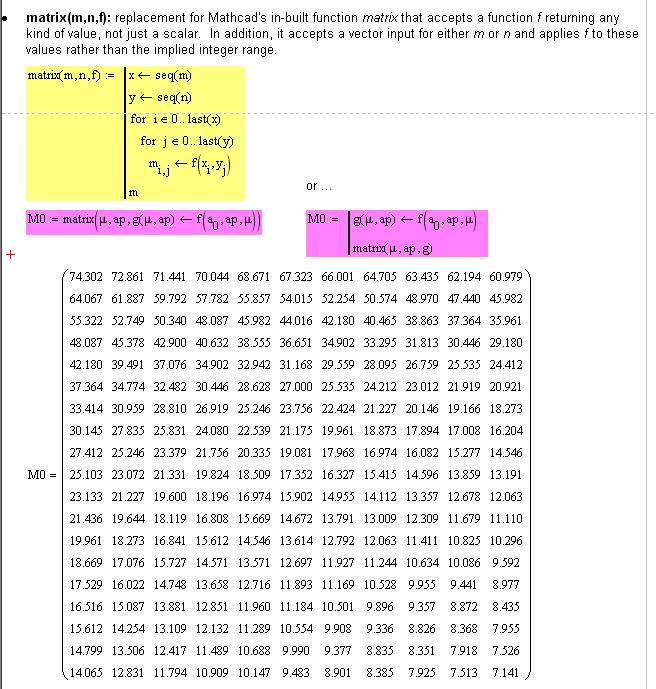 where a, ap (a') and mu are as defined in your screenshot or my previous one.

Have we already asked for multidimensional arrays (MDAs)? Hmm, not sure that we have ... Oh, my goodness, it seems that we *have* asked, but only about a gazillion to the power of aleph-0 times.

I've also had the occasional moan about the poor support for nested arrays. In fact, by sheer coincidence, I've commented on the PTC blog about the new OBDC functions for Prime. There is so much multidimensional data out there, with fairly common processing needs, that there must surely be a considerable business case for implementing MDAs.

jlee-2
Newbie
(in response to Werner_E)

Thank you for help.

I will try to understand by coding

jlee-2
Newbie
(in response to Werner_E)

Thank you for helping me.

But I will try.. thank you