How to drop out of loop

How to drop out of loop

Here is my FORTRAN statements:

I include my attempt, results and what I want.

Are you looking for this? 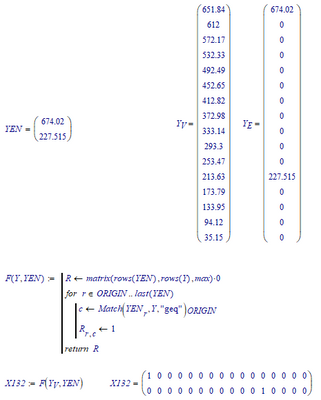 Your Prime  and Fortran programs are different.

Assuming the Fortran code functions according to your desired behaviour (whatever that may be), these are the differences I see so far:

You to place this JAK assigment immediately below the X132 assignment, not below/outside of thye entire IF statement.

The "IF(YE(J))" in your Fortran code looks like an IF statement at first sight, but it isn't because it is NOT followd by "THEN".

What does it do? Especially the three numbers following the IF() are puzzling. Are they line numbers? And how are they processed?

It might help a lot if you could explain what functionality you wanted to program. What is the effect that your function should accomplish, in plain text.

Got it! See attachment.

Are you looking for this?

Most interesting approach, I was not aware that any version of MathCad (including Prime) had these functions.

Thanks for you assistance. Hope you were able to view my previous attachment.

Here is my final attempt. I have tried reducing statements, but I cannot. Your solution seems to want an exact match(?) between YEN and YV.

Here is my attempt to translate your FORTRAN program to Prime one to one. Its similar to yours and the missing point, as you had found out on your own, was the break command to jump out from the inner loop (which nowadays is considered bad programming style ;-). 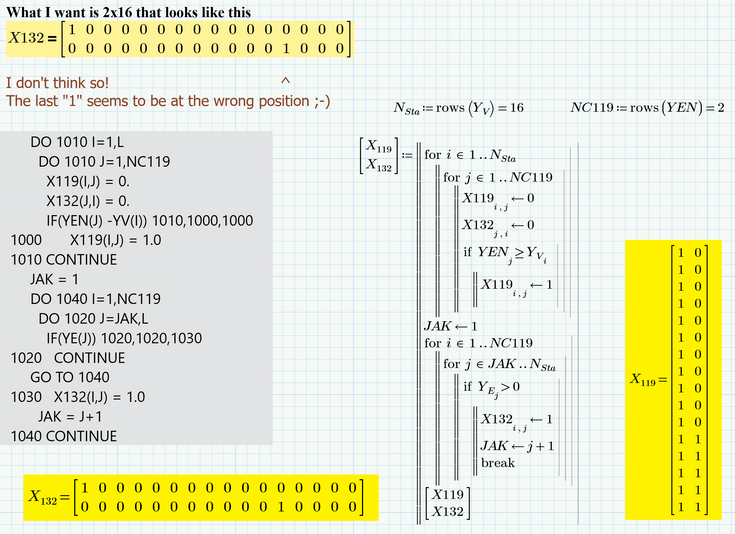 Of course this can be made a bit shorter because in Mathcad, as you found out yourself, its not necessary to set every single element in a matrix to zero. The values are zero by default, no need to initialize.

Not sure if you already realized, that variables used in a Prime program at the left side of an assignment are always local variables only and do not correspond to variables at worksheet level with the same name. So your second program does NOT use the X132 you created in your first program. The only way to change worksheet variables is to assign them the result of a program. So you may notice that the program variables in my program are called X119 and X132 but the worksheet variables have different names (same, but with the number as literal index).

Luc's suggestion only works in MC11, not in MC15 and also not in Prime.

Here is a similar approach which works in Prime, too. It uses Y.E for comparison as the original program:

As I could only provide a Prime 5 or Prime 6 worksheet, I don't attach it as your Prime 3.1 would not be able to read it.

You've multiplied the result of the match() function with ORIGIN, whereas you should only take its first element.

Please try again with the attached file that should open in Prime 3.1

This is what we get after recalculating the sheet:

I was surprised to see, that in Prime we can use "max" as function in matrix again. As you know it was allowed in MC11, but it failed in later versions (at least in MC14 and MC15).

I've used max a lot of times as third argument in the matrix() function, see my 'it's a joke' post.

would be better here, but it's longer...

I may have made a mistake in implementing Match() in Mathcad 11.

Sure, here you are - looks good

Here's the file, corrected and saved from Prime 3.1, so it should open in Prime 3.1.

The first line creates R as a matrix of 0's, the size of which is determined by the numbers of rows of YEN and Y, using the matrix function, and sets it to all 0's by multiplying it with 0.

The second line starts the for loop, to go through all (at present 2...) elements of vector YEN.

Within that loop the first statement  uses the match function that finds all indices in array Y whose value is less than, or equal to th chosen YEN element's value. Given the values above, match finds the list of indices from ORIGIN to last(Y) when we're working with the first value of YEN. From that array, only the very first (the one with index ORIGIN) is assigned to e. So e holds the index where, for the first time, an element value of Y is below the chosen value of YEN.

In the second row the element of matrix R whose index is determined by r and e is set to 1.

The second time around in this loop, match should give a list of indices starting at the 12th element and on to the last. Again only the first of that list, the index pointing to the 12th element is assigned to e. An again at the chosen position in R a 1 is set.

When all elements of YEN are processed, the matrix R is returned as the function result.

Thanks for your help.