Would anybody please help me with the attached file. My goal is to do interpolation given a period T.a =0.5*sec, based on site_class and the header Sa(0.2*s)  for Fa(site_class, Sa(Ta)) and

same for Fv(site_clas,Sa(Ta)), I'm having problem as to how to program this in Mathcad. I will appreciate this if anyone can help.

If linear interpolation is sufficient, I guess that the attached should do the job. Just a quick hack - no error checking for invalid site_class is implemented and ORIGIN=0 is assumed. 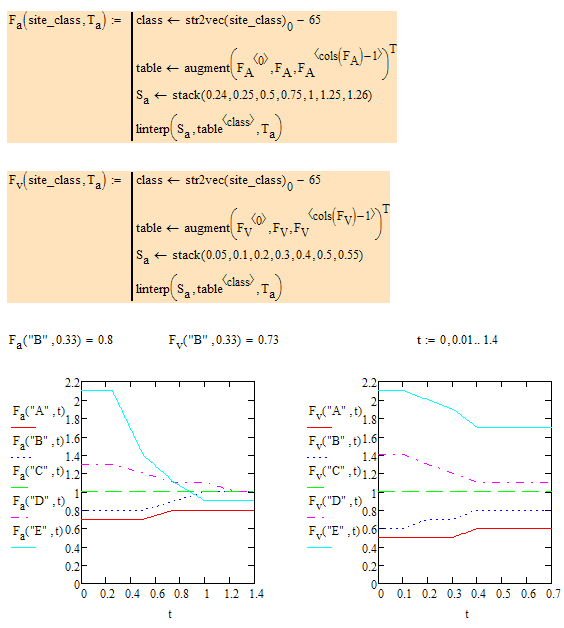 If linear interpolation is sufficient, I guess that the attached should do the job. Just a quick hack - no error checking for invalid site_class is implemented and ORIGIN=0 is assumed.

Werner, Thank you so very much.

Please see attached pdf file. On the subject on earthquake, the values generated  for Fa and Fv seems to be off and I do not know why. Would you be kind to review the Mathcad function linterp.

The equations Werner provided to you calculate:

They are not functions of Ta as seems to be indicated.

Therefore, his equations appear to match the values shown in your attachment:

Thanks for your comment. What should I do to resolve the issue in the function statement.

As you named the second arguments in your functions T.a I did so, too.

Probably S.a02 and S.a10 would have been a better name for the arguments of F.a and F.v respectively.

Keep in mind that I have no knowledge in the field you are working in and so I just see names and numbers which mostly are w/o meaning for me.

Thank you both for helping on this problem. My goal is to program the Canadian NBCC 2010 which is called "Earthquake Load And Effects" and is attached as a pdf. Also, I have attached a copy of my file that I'm working on. Also, I have also attached a copy called seismic response spectrum.mcd by Ian Ward. What I would like to do is to create a Canadian version of the attached seismic response spectrum.mcd, in which I have to calculate the Fa and Fv before proceeding to other calculations in worksheet. Please, take a look and see if you can help me.

Looked at the pdf and found not much clue as to how function  S.a(t) would look like. Only found that its something called "5% spectral response acceleration,..."

Looked at the Mathcad file "seismic response spectrum and here the tables for the acceleration and velocity coefficients (Q-oage, R-page) are ddependend both on the same value Z (seismic zone factor).

The coefficients are simply picked from the tables in a lookup fashion using "match". No interpolation is done! That means, that in this sheet the seismic zone facror Z can be 0,075 or 0.15, but it will fail if you input Z:=0.10.

The function for response spectrum is derived using the coefficients Ca and Cv which are picked from those two tables.

So in this approach the value of Z must be provided to get the two coefficients.

In your approach the coefficients are dependent on two values S.a(0.02) and S.a(1.0) and you sure should rename the argument of my functions accordingly. I have no idea where you would get those values from. Furthermore you asked for interpolation, not just picking the exact values from the tables and this is what I had shown how it could be done.

As already said I have not the slightest knowledge about earthquake theory and unfortunately don't have the time to study that sure interesting field in the necessary details.

But if you have a concrete Mathcad related question, feel free to ask.

Thank you so much for your help.  I really appreciated it very much. Your interpolation is correct, but I think that is a function of Sa(0.2) instead of Ta.

I have modified your file, it works. As Mark said the function of Fa and Fv are based on the site and given Sa0.2 and Sa1.0 as per Canadian provinces. Thank you for your help. Please see attached.

Glad to hear that you are up and runnig!