There is the dilemma: more often than not, especially with Excel 2013, numerous popup windows and excel windows pop up for every embedded excel object in each Mathcad worksheet; VERY ANNOYING! If there is a solution to this, please tell me.

1) Is it possible to Suppress Excel Windows From opening for Every Embedded Excel object?

2) Is it possible to suppress the 'resize' of an embedded PowerPoint object between computers w/ PowerPoint 2010 & 2013 installed?

4) On a side note, is it possible to program the locations of embedded objects/regions? I am familiar with the "x" and "y" properties of a region located in a Mathcad worksheet, but these properties are read-only, correct? How would one proceed to automate moving a 'region' to a specific location (in vbscript)?

(NOTE: I have tried embedding a Mathcad object and that works fine for manipulation, but the aesthetics are poor and the runtime is too long.)

I think I found the solution: Apparently, unchecking "Allow Object to Resize Itself" DOES work. I don't know why it didn't work the first time I tried it, but it works now (forgot to save the change before testing, maybe?) This prevent the object for increasing/shrinking as I've indicated earlier.

Recap of What I found:

-Excel -> Prompts a BUNCH of msgboxs/windows

-Word -> Works (Didn't test this too much, might be better to use then powerpoint for header/footer)

-powerPoint -> Works, but the minimum slide height is "1 inch", so the entire object needs to be resized if a 0.5" tall object is required (as opposed to just reformating the slide height when editing the ppt object.

-OpenOffie -> content didn't display on my screen; could edit data but couldn't print from the mathcad sheet - openOffice document showed up as 'blank'. 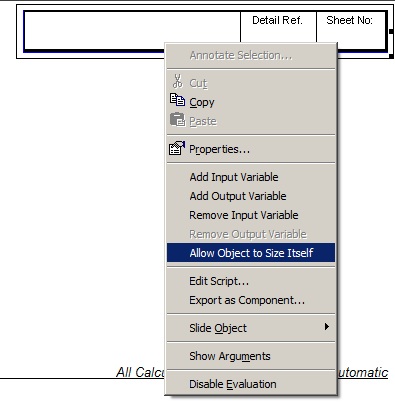 In addition, I found out that you can print off a flexgrid table. If you embed said table into a mathcad sheet inside a mathcad sheet, a 'low quality screen capture' of sorts is taken on the msFlexgrid, but it DOES print (whereas it will not).

I cannot help but get the feeling that I am talking to my self, but here is my latest find:

Embedding a Powerpoint Object in A Mathcad Object within Mathcad works, however I found that if you close the Mathcad application, and then try to reopen the worksheet under question, it fails to load the desired regions. What I have been forced to do is terminate the process in the task manager (yes, there is a mathcad process running when mathcad exits with this embedded embedded structure going on). Once I terminate this process, then I can open up the mathcad file under question with no problems. Whereas my colleagues will find this annoying, I may be forced to stay with the automatic resizing of the region.

Also, when you have an embed mathcad object withing mathcad.... it seems as if it is a worksheetsCollection object; the only way I've found out how to access the embeded mathcad object was to access ScriptObj.Worksheet.setValue(xxx,xxx) Is this the wrong way to access this object? Does it create a new mathcad process? Can I terminate this process when I close that particular mathcad sheet. Hhhmmm...

If you attach a working example of your sheet, you are very much more likely to receive an answer.

Questions like this one are usually beyond our direct experience but might have similarities to issues already experienced (scripted object, XL sheet etc. rather than power point) .

From what you have said it sounds similar to the positioning of regions in general - they do seem to move a little - I compare worksheets side by side & am always adjusting line spacing.

It would be ideal if, as you say, the worksheet could remember the exact position & size of every object : (PTC) -> its not rocket science...

As to the instance of mathcad continuing to run, probably the closing routine is failing in some unexplained manner leaving your copy of mathcad running in the background. I've experienced this from time to time usually when mathcad has reported "an error has occurred, please save your work and exit", these instances have usually been un-repeatable so not as easy to debug / report either on this forum or to PTC directly.

If your sheet makes it repeatable then this could be a small step forward.

I've debated posting a working worksheet, but I already have a lot of proprietary information programmed into it.

As for "an error has occurred," I have never received that particular message. Heck, when I do get messages, it rarely allows me to save my progress. If I remember, I've had the "ran out of disk space" when trying to save and I've had the "file is corrupt" when opening random mathcad files. For the later, we discovered that it was an embedded excel region corrupting the file and we merely had to open the file in notepad and find the excel 'region' and delete it; which would allow the file to open with the loss of that one region.

Prepare a very cut-down version, just a line or 2 of text in the powerpoint would do (as long as you can see it mis-behaving) & post a couple of pictures if possible to show what result you get of the size /position change in case it doesn't for us.

Which version and which maintainance release of Mathcad this question belongs to?

Some older versions were "famous" for staying in memory after closing (MC14 M035 comes to mind). 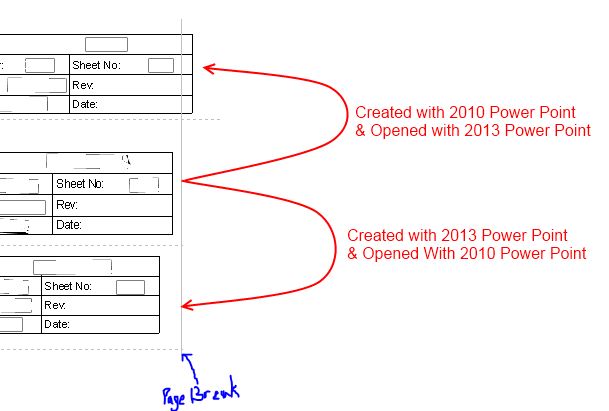 Attached is a cut down model:

That doesn't seem to be the most current version, which should say

But I guess your problems do not relate to a bug which is fixed in the current release. Nevertheless it might be agood idea to use the most current release, if possible.