Limitations of the symbolic derivatives in Prime

Limitations of the symbolic derivatives in Prime

I would like to point out that in Prime, in calculating symbolic derivatives, the order of derivation can not be written as the sum of two integers but with an index that represents the sum of them, and this, however,  is not written properly, in fact: 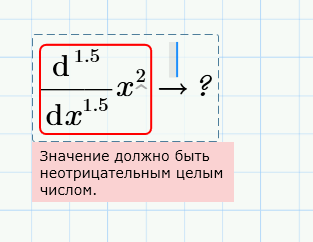 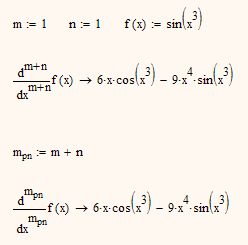 The Prime help does not state that the order of the derivative has to be a constant and not an expression to be evaluated, so I consider it a bug (otherwise it would be a severe, not acceptable limitation).

So, while I consider it as a minor one, its still one more reason not to use Prime yet.

@Valery: Yours is not a limitation of Prime, its a mathematical one - it makes sense to limit the order of the derivative to positive integers, so Prime is OK in this case.

If you are looking for other discrepancies or limitations you may look at the newly introduced Prime operator.

It does not exist in real Mathcad (other than in a limited way in a solve block in conjunction with odesolve -> Ctrl+F7).

This Prime operator would be a nice feature, if it would be better visible and could be applied using a keyboard shortcut on foreign keyboards, too. Unfortunately thats not the case and using the ribbon menu is too tedious. This prime symbol can be cascaded to get higher derivatives, too, which is nice.

Unfortunately PTC forgot to tell the symbolics about this new operator 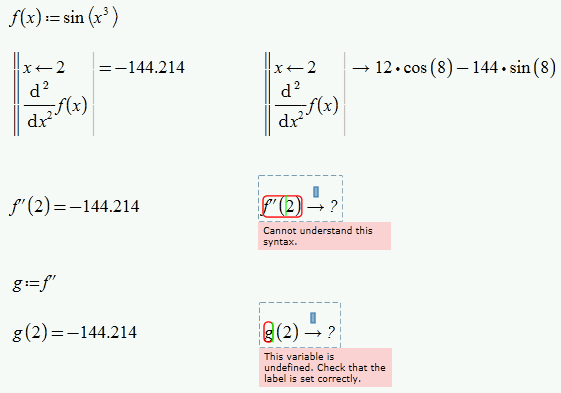 So again - maybe some day this will be a consistent and useful feature, but not yet. Better keep away from Prime - at least for the next few versions.

One limitation of Werner - he do not understand humor

I indeed have many limitations but in this case that's only partially true: In fact I really very often don't understand YOUR type of humor. But in no way I see this as a limitation 😉

While, as I wrote, it makes sense to limit the order of the derivative to positive integers, its not mandatory to do so! There is a branch in math which deals with "fractional calculus" (e.g. Fractional calculus - Wikipedia). So again one more reason to take your comment as serious and real. If you intended to make a joke it would have been either not fair, given, that there are people out there dealing seriously with this subject, or it simply shows you were not aware of this branch of math analysis - that you really thought that something like a "half-derivative" does not exist and that it would be funny to pretend it does. If the latter applies, you should be a little piece wiser now.

And then - there is so few good we can say about Prime. So if there is an opportunity, we have to grab it (even if its just to say that in one particular case Prime is OK and not wrong). These are still very rare moments.

Sorry, Werner. It was my limitation.

I have wrote about fractional calculus in my book

The 3-d one do not answer my letter. 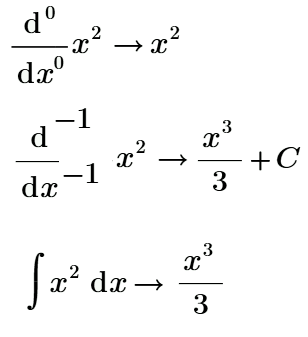 Sorry, Werner. It is difficult to have any discussion with you. Why? See please I feel like a fool in this team. All hid their data and only me (stupid) opened it.

Not sure which difficulties you are experiencing. As Richard wrote in the thread you opened - you, of course, see more information about you  than other members of the community do. And in the settings you can control (only to a certain degree) what should be visible for others and what not).

But the forum seems to have some kind of bug or security leak as very often I see new members and their mail-address is revealed. Thats really bad and a big security hole and a violation of privacy protection and I am sure that most of these user didn't want this to happen and probably aren't even aware that they are revealing more personal information than they are willing to do.

Generally its always a good choice to reveal online as few personal information as possible and using a real name here probably is careless and dangerous enough.

I really don't see what kind of difficulties you see in having a discussion with somebody. It has to be done via thread now, because the personal mail system here was broken with the last forum software update. Now we have "streams" a´which we way "filter" in an awkward and clumsy way to see "messages" floating by in an unstructured way and which we can't delete or keep sorted in appropriate folders - nothing. All I could do possible is to "like" a message. So its useless to me and I am not inclined to deal with that nonsense and so I don't use it and usually don't look at my Inbox (which is not an inbox but rather a big garbage container).

If by having difficulties with discussion you mean this thread - I honestly had no idea what I could answer to your last reply. I explained why your joke wasn't that funny, you replied that you know about fractional calculus, so there not much to further say.

Then you wrote "The 3-d one do not answer my letter." and I had no clue what you were trying to tell me with that.

At the end you showed your "famous" picture manipulations to demonstrate "your" MC PMinister, something which you seem to love to confuse newbies with, as they have no chance to realize that you are just pretending the existence of a Mathcad version out of your mind. But I don't think its funny to confuse people which come here to look for solutions to their problems (yet another kind of humor I have no sense for, sorry).

So I think you will have to explain in more detail what you mean by all that.