I have made some calculation in Mathcad 14, and it seems that there is a bug....

On the right I got the result with units, and to the left without...?

Can some buddy explain this.

I have now attaced the document.

Hope there is some help.

you have two issues here: one is that you obveride a MC built in unit; i.e. S which is defined as the inverse of electrical resistance. The second issue is that you're using MCs unit conversion on an empirical equation. I happen to know this equation because I need to use it quite often (shell thickness for a cylindrical pressure vessel - right?).

You can't use the unit conversion for such an equation because there are some fudge factors hidden within the "20". If you use dimensionless variables for this kind of calculation it will work just fine.

Yes your are correct it is pressure vessel. Ok, I then just change the safety factor S to S1, and sadly,

get rid of the units

, unless somebody else can't help.

and thanks for the quick response

Look at the attched if it would help

Thanks for your answer, I think I will go with this.

BTW, you don't have to rename your variable S if you don't want to do so. It does no harm as long as you don't need unit Siemens later in your sheet.

I think Raiko just wanted to explain what caused the green undeline, its just a warning as of the redefinition and you can turn off warning in Preferences.

I guess that an empirical formula can be a physical, too.

Unfortunately I don't see what your pic is demonstrating in that context.

But I think Raiko was right, calling this equation empirical, otherwise I would expect that it doesn't matter which units you use - so my understanding.

With a physically formula like v=s/t you get the correct velocity, whether you provide the distance in feet or meter.

Also, Jesper must realize that when using this empirical equation for shell thickness it will give wrong results when working with units (see attached MC 15 sheet)

It looks as if you have a conversion error. When asked, Mathcad reports K1f as 1720bar not 172bar.

Its an empirical formula which only works if K1f is given in N/mm^2.

I'm only looking at the discrepancy between the two results.

As it is an empirical equation - I don't have any info either way to say which is correct.

All I can do is identify why there is a difference.

Since P is defined in bar , it makes sense (to me) that everything else should also use bar when appropriate.

However , if 10bar is equvalent to 1N/mm^2, then (in theory) it should be possible to make the equation more unit friendly.

this equation is an empirical one that was created in pre-computer ages when such calculations were still conducted with slide-rulers. For the convenience of the engineer the inputs were comitted to certain units in order to have less "thumb-work".

This equation stems from the SVTI. A similar one from the "AD-Merkblätter 1996" has a 40 instead of a 20 in the denominator. In case of the SVTI the pressure has to be given in N/mm2 whereas the AD accepts pressure in bars only.Hence, the enginer had less to worry about powers and so forth.

Using such equations with unit conversion will give wrong results.

In my previous post I have made sheet where I mix mathematical and text regions but I use only dimensionless variables. This facilitates reading as it gives the impression that the variables are with units.

The name of this formulas is pseudoempirical formulas!

One typical example from Chemistry: 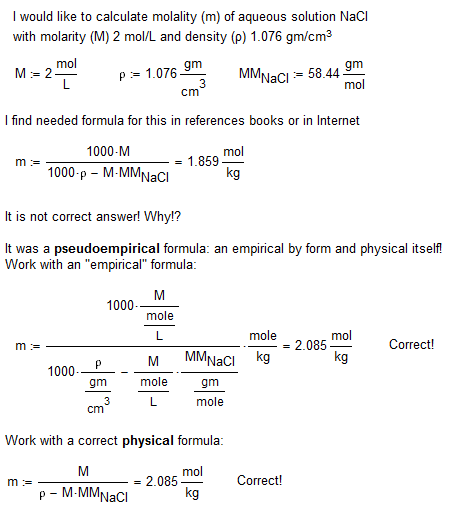 Dear sir, you should indicate any each parameter with the corresponding unit of measurement as shown here: 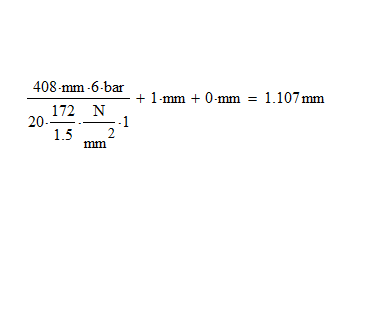 Same problem! You probably missed the point that the "desired correct" result should be the 2.065 mm. As already stated its an empirical formula (or as Valery calls it: pseudoempirical) in as much as the result differs depending on the units used (which is not the case with a pure physical formula) and so specific units are mandatory.

In an empirical formula mostly only the absolute measure values w/o units are used and there most of the time are "hiddden" units in the constants used in that formula. Sorry FrankOberBier(??), but I really think you missed the point here.

Hmmm, I understand that in an academic environment one is oviously not confronted with (pseude)empirical formulas that frequently.

As I see it, the question of Jesper was, that he had an empirical formula where one usually uses all or some of the values w/o units while specific units are implicitely assumed, but he wanted to use in his sheet variables with units. Thats quite legitime and as shown in prior posts can be done by dividing by the expected units.

No, its the other way round! 1720 bar will result in 1.107 mm. But Jesper needs a result of 2.065 with that pressure and therfore I suggested to devide his variable by N/mm^2 to get 172 w/o unit and process likewise with the other pressure variables.

It may look strange that some values have to be in bar and one in N/mm^2 in that formula, but thats not so seldom in real life engineering empiric formulas which still are in use. It may have a historical background or is a result of the units commonly used for certain quantities in that deomain. The trick is to apply the formula correctly, mainly getting rid of units where no units are expected.

The confusion arouse because Jesper defined P with 172 N/mm^2 and obviously thought that the number 172 alone would be used when he puts P in the formula. Not being fully aware how pretty well Mathcad will use units 😉

you have to keep in mind that historically, these equations were structured in a fashion that made them easier to compute for the sliderule wielding engineer. Hence, it is mandatory to use only the numerical value of the variable (effectively making them dimensionless) for a certain unit; e.g 100 mm but 0.1m. This is stated in the respective codes such as the SVTI. Otherwise you will get wrong results.

I suggested earlier to mix text and math regions in order to compute with dimensionless units - see pic.