At the last event "PTC LiveWorx Europe 2015" in November of 2015 it was presented a roadmap for the development of Mathcad Prime 4.0 and some future steps (themes) for Prime direction. Let's see what updates are planned for version 4.0 (now the release of version 4.0 is scheduled for the 4th quarter of 2016 year) and is scheduled for subsequent releases after 4.0. PDF "PTC Mathcad Roadmap_2015" can be found in attachment.

Here is a list of major improvements for Prime 4.0: 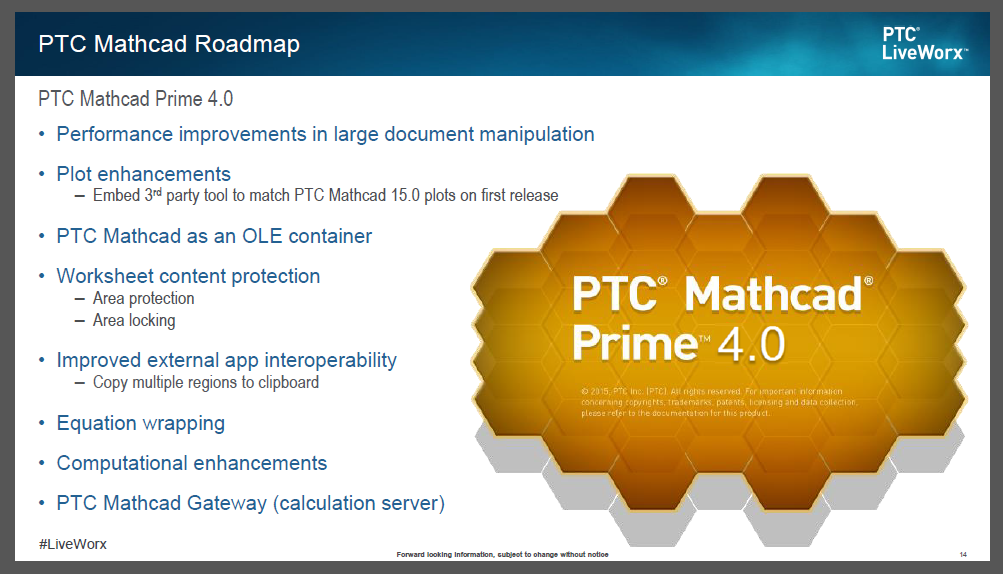 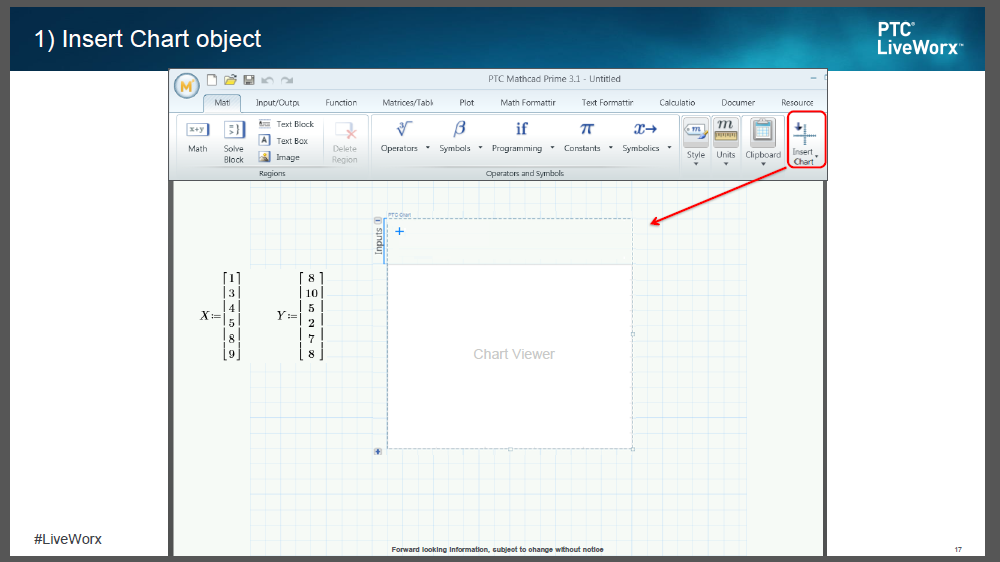 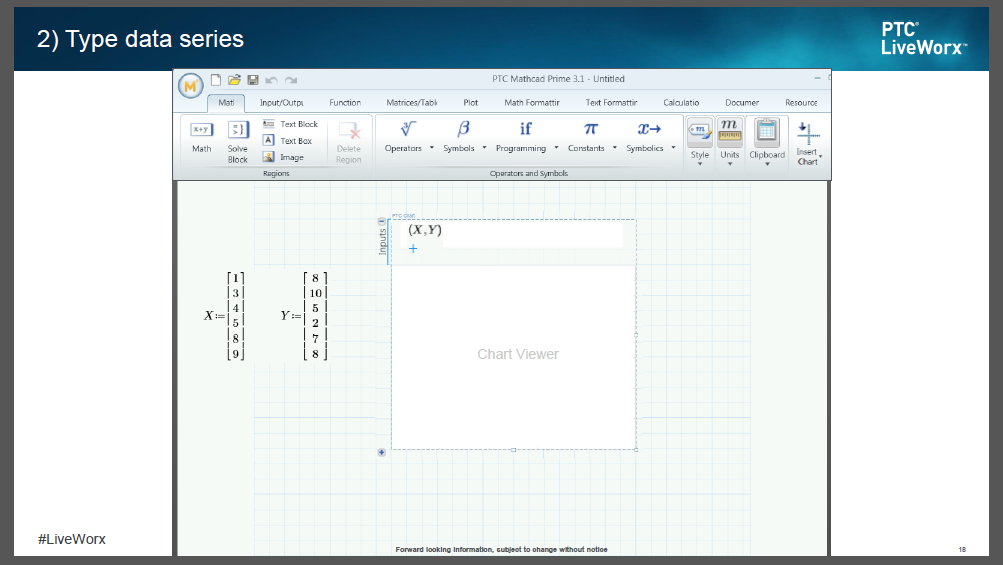 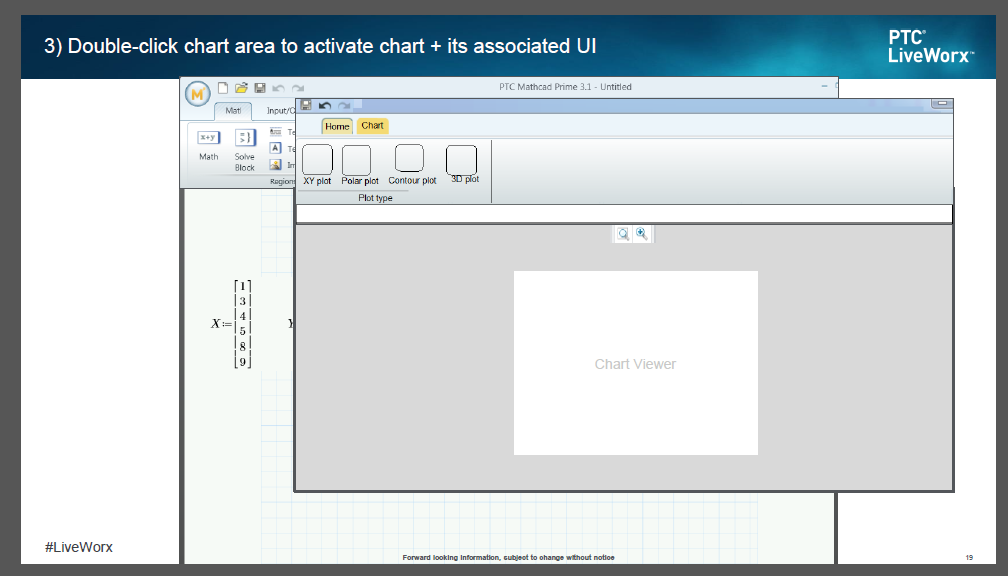 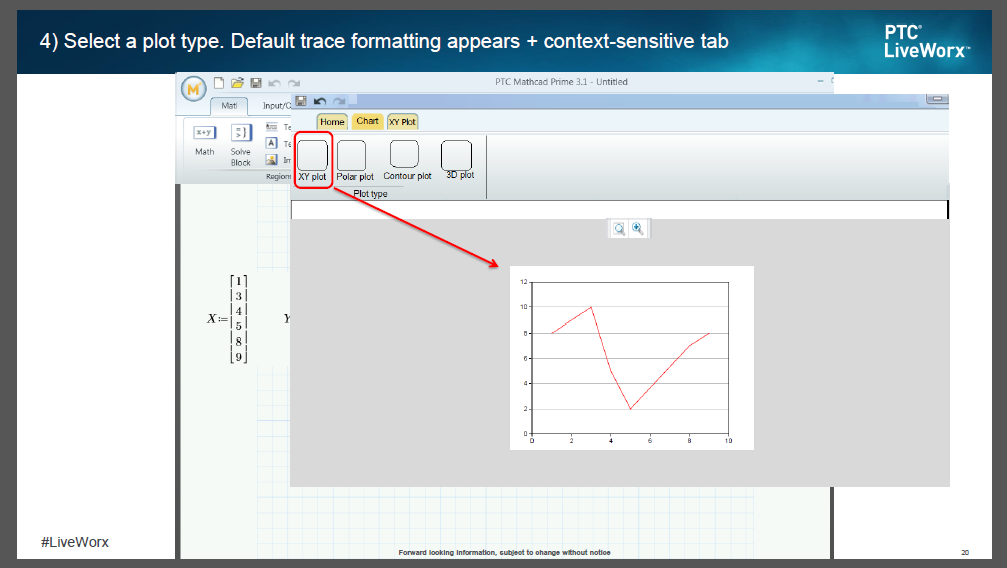 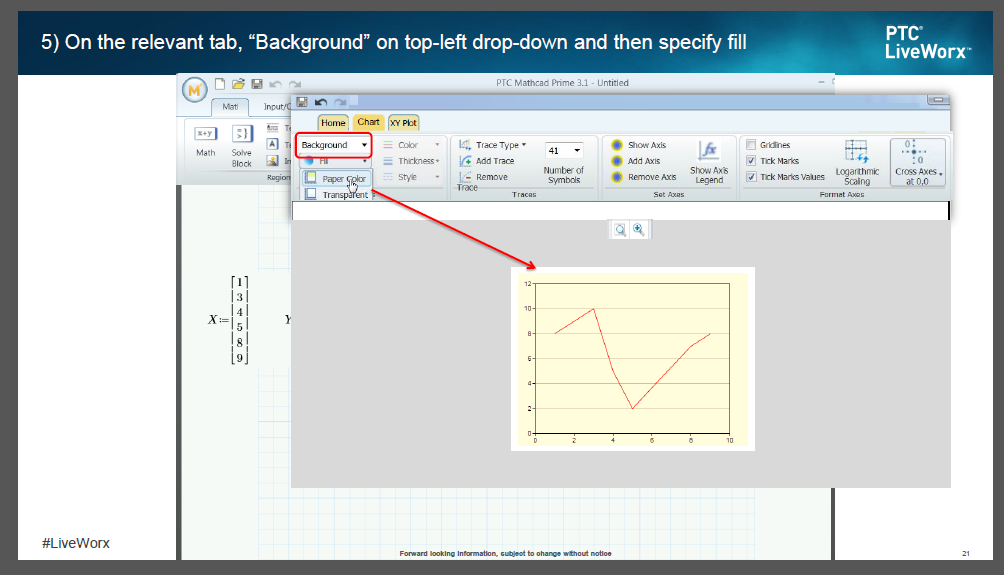 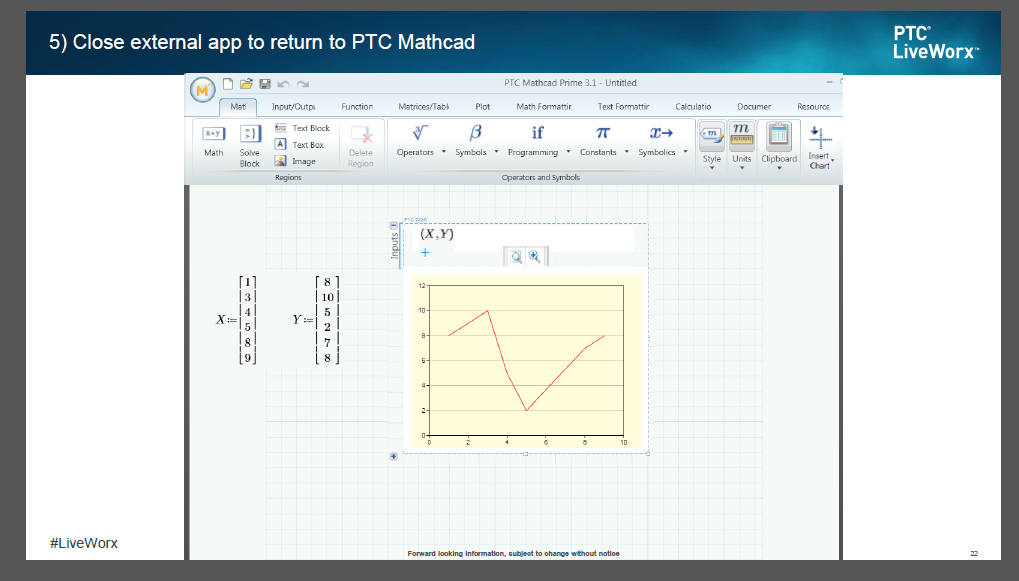 2. Mathcad as an OLE container: ability to embed applications as OLE objects within the worksheet. 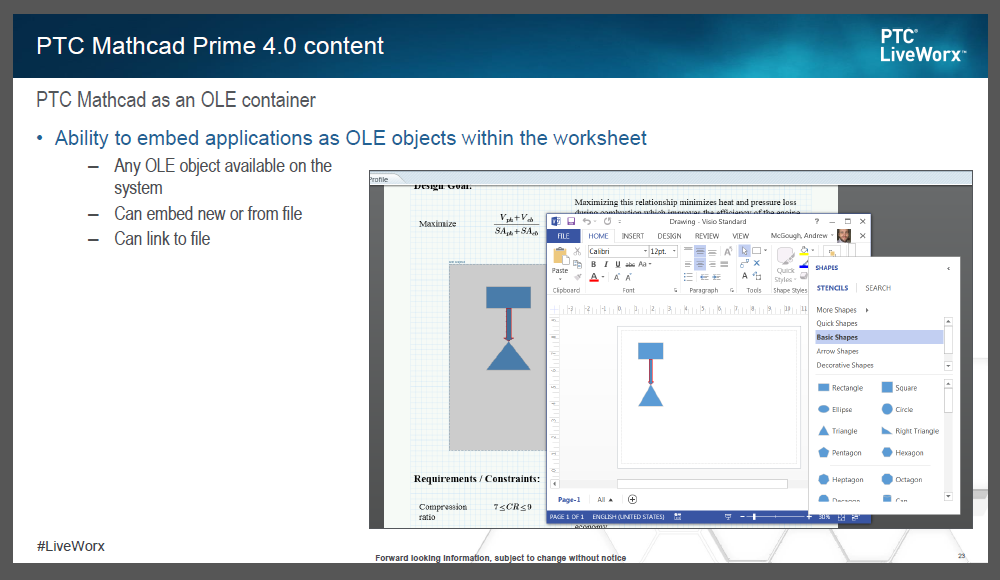 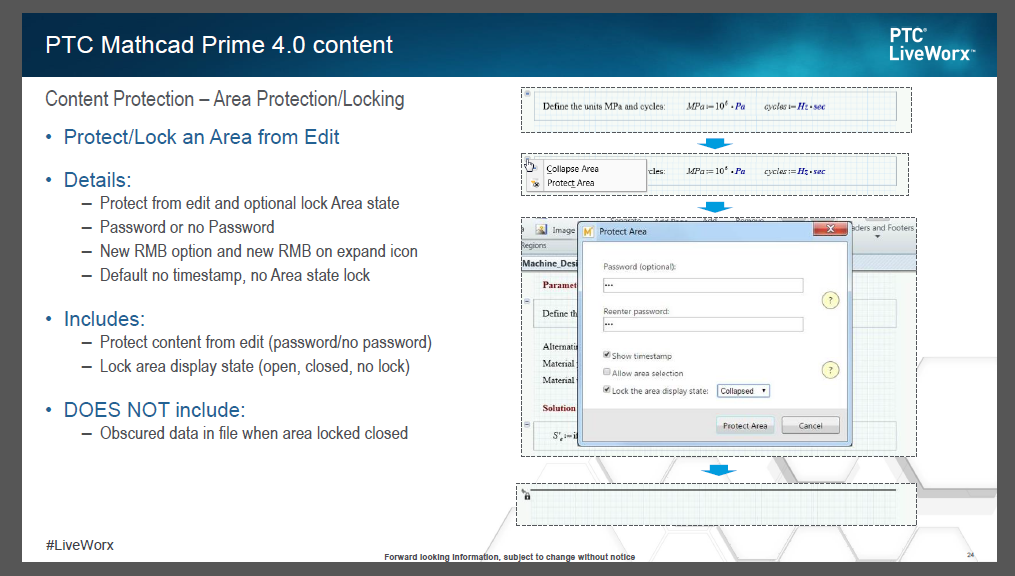 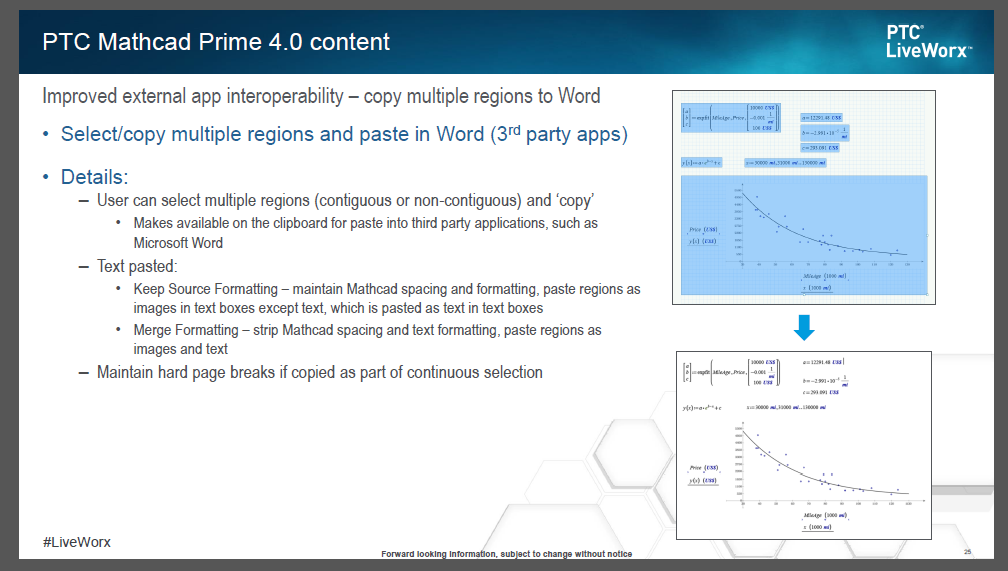 5. Equation wrapping: allow an equation to be split/wrapped as specific points. 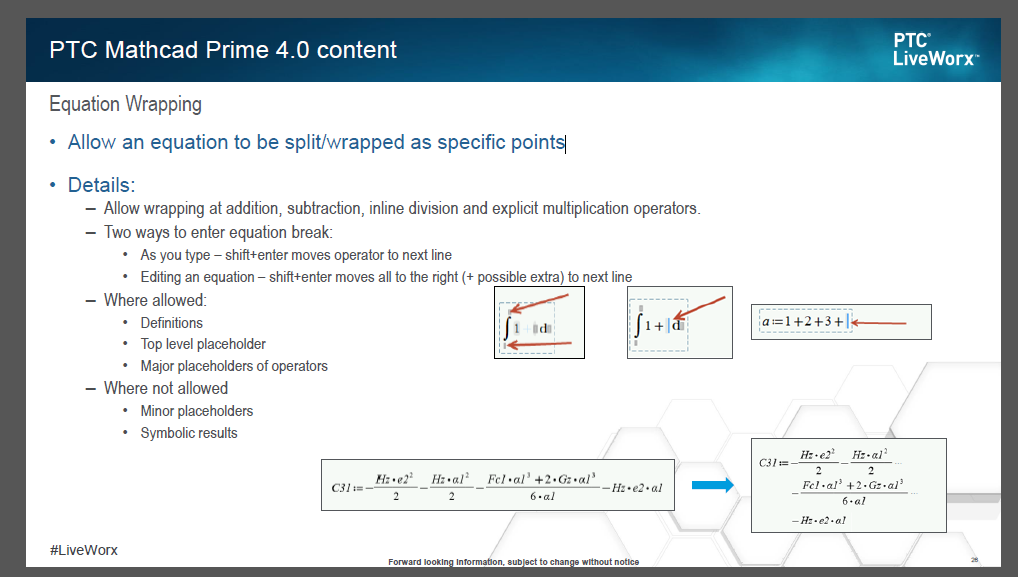 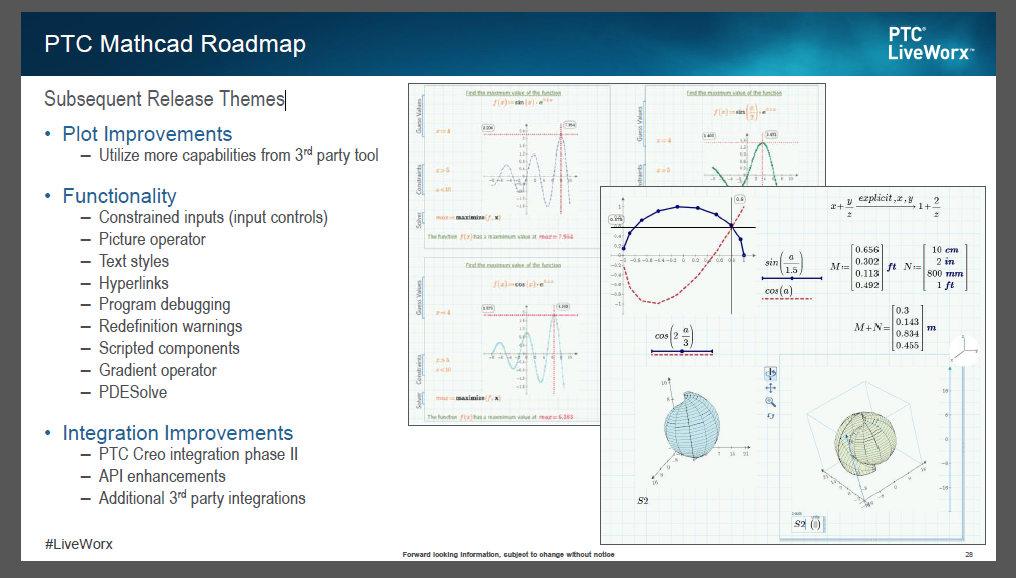 As of today it's chaged to next monday, they had to fix a bug concerning determinants:

Re: Using Prime 3.0, the determinant function does not handle a matrix with complex numbers. Don't ...

I just put in a service request for an update.  Maybe all should and that may get their attention?

According to what I have read the release date for Mathcad Prime 4 is the 6th of March. PTC did not say what year. I am now convinced that the only reason PTC purchased Mathsoft over ten years ago now, was to work out the optimal date at which everyone's maintenance expired. By that I mean the specific point in time at which most users have to renew their licences.  Only then do PTC release a new version Mathcad. The reason being is to get most users to upgrade as they would have to renew their maintenance to get the new version. The delay in delivery has nothing whatsoever to do with bug fixes.

From what I see we are the beta testers, I think they don't even have official beta testers for Mathcad, why would they, as there are no new features to test. Now the number one feature in the new version is a speed increase. Can you believe it? It has taken them 4 versions to realise that Mathcad Prime runs like a dog.  They promote a speed increase as their no 1 feature. What planet are these guys on?

The whole reason we are told by PTC told to upgrade to Prime was it was based on a modern, robust and presumably faster code base. PTC continue to milk their users trying to convince us that BUG FIXES = "HOT NEW FEATURES" this is a deliberate Orwellian strategy.

So PTC has now missed 3 deadlines of their own making. So what do we get in this year's release? Well, in fact, NOTHING that is not already not already in Mathcad 15. We still cannot produce professional plots, no PDE support, no control widgets, still cannot publish to the web (unless one pays megabucks), still stuck with one-dimensional arrays and the list goes on and on. Now the fact is that the Mathsoft programmers had all these things sorted more than 10 years ago.

Once Prime matches Mathcad 15's feature set then what? Do PTC then say they have a brand new product called "Mathcad Alpha" then feed their subscribers the same bull sh.. and then milk them for another 10 years as once again they play catch up. In writing this I hope I have not given PTC ideas! but I expect such strategy is already being put in place.

All good points.  I believe the real reason why PTC wanted Mathcad to have a "modern code base" is so they could integrate it with other PTC products, such as Creo and draw us in to the PTC ecosystem.

Perhaps rather than waste time bleeting, we should vote with our feet.  There are now much better alternatives out there.  Because of Mathcad's stagnation and increasing limitations, I bought Maple and Mathematica about a year ago and haven't looked back.  They're both far superior to Mathcad.  Maple is a better fit as a Mathcad replacement whilst Mathematica has some incredibly powerful functionality (although it does take longer to learn to use efficiently).  I for one won't be wasting any more of my hard earned on Mathcad subscriptions.  Good luck to those that cling on 😉

I need the units feature of Mathcad for some of my work. I have a copy of Mathematica. While it can incorporate units in calculations, it does not manipulate them like Mathcad does.  I do not know about Maple.   There is also a free Mathcad replacement known as SMathStudio.  It is not as complete as Mathcad, but is quite nice and still under development. It handles units very nicely. Perhaps the answer is to use SMathStudio for those calculations that need units, which are normally not very sophisticated, and Mathematica for the more serious stuff.

‌Maple handles units in much the same way as Mathcad. But does much more. Mathematica can also incorporate units, but not in as straightforward a manner. Like I said previously, if you're looking for a Mathcad replacement, I think Maple is the best fit.

Sorry, but a lot of tools of Maple can not work with units - plots, optimization etc

I don't use optimisation so can't comment on that. But, I do use plots with units and they work fine in both Maple and Mathematica. See this link to the Maple help pages for examples - http://http://www.maplesoft.com/support/help/Maple/view.aspx?path=MaplePortal/UnitsInPlots

I guess that no matter what, there'll always be things one tool does better than another. Which is why I've opted to run with both Maple and Mathematica - between them they cover pretty much all the bases for the work I do. The main point is that, in the main, Mathcad has fallen so far behind these (and possibly other) options that it's no longer the tool of choice. Not for me at least. and not by a substantial margin.  Furthermore, I've seen no evidence to suggest that PTC is likely to make up the lost ground. At least not in my lifetime.  Set against this background, I struggle to see why anyone starting out today would opt for Mathcad (other than for maintains legacy calculations).  Which is a shame because, in its day, Mathcad was first rate.

The fact is that its hard to teach old dogs like us new tricks. But this discussion was never about which Math program is better than another, but rather about updating people on when Mathcad Prime 4 would be released to the market. Let us not forget that we should already be using Mathcad Prime 4 if PTC had kept its promise to its users. The sad fact is that PTC don't extensively beta test MathCad which is shown by the latest debacle.  Neither do they have the required number of software engineers to make this a great product and nor sadly is their management is just not up to the task for reasons I will explain. What we have at the moment, as others have pointed out, is a math tool that is probably ten years behind its competition.  One could argue that Mathcad continues to be in front because of its units handling but that's like saying Lotus 123 is better than Excel because Lotus 123 does not need the equals sign before the formula. The sad fact is no one uses Lotus 123 anymore.

In my view, TKSolver in many respects is much more powerful than Mathcad particularly due to its backsolve capability and optimisation functions. Sadly, in both cases very few if any people now use Lotus 123 or TK Solver. What I am trying to get across to PTCs brainless and dare I say lazy management is the fact that people will start voting with their feet.  Mathcad is definitely behind its competition, as I said at by at least 10 years.

So Mathcad will soon become irrelevant in the marketplace. The sad thing is, this could easily be turned around if PTC once again started listening to its users. Now we have seen other greedy, lazy companies before; Microsoft come to mind.  Now both Apple and Google could buy Microsoft many times over simply because those companies did not sit on their hands like Microsoft or PTC have doing but rather started changing their focus from greed towards innovation knowing that profits would  flow,  It is ironic that a so called Math Software like PTC have forgotten one basic equation.  Innovation = more users, where more users = more units sold x price. Thus more units sold = more profit. Hence Innovation = Profit.

I think such high level Mathematics is beyond the PTC managers.  These guys go work for one thing only to pick up their ill-gotten wages. The other sad thing  is that  like TKSolver before them, that they have stumbled on a diamond in the rough. However, that diamond first needs to be cut and polished only then can it be sold to the masses.

Both Milos Konopasek and  Allen Razdow is and were geniuses of their time. I would say the equal of any in the computer industry at that time.  It is such a pity that their genius has been diffused by many years of inept PTC management and dare the same goes for TKSolver. The sad thing is PTC management have never understand the minds of such remarkable men and what they have been gifted by them. Unfortunately their IQs are too low to understand the remarkable gifts they gave inherited.

I tell it how it is.

The main product of MapleSoft is Maple.

The main product of MathWorks is Matlab.

The maim product of Wolfram is Mathematica.

But the main product of PTC is Creo!

The version of MathCad Prime F000 4.0 is released.

Yes, it seems that it is really so. 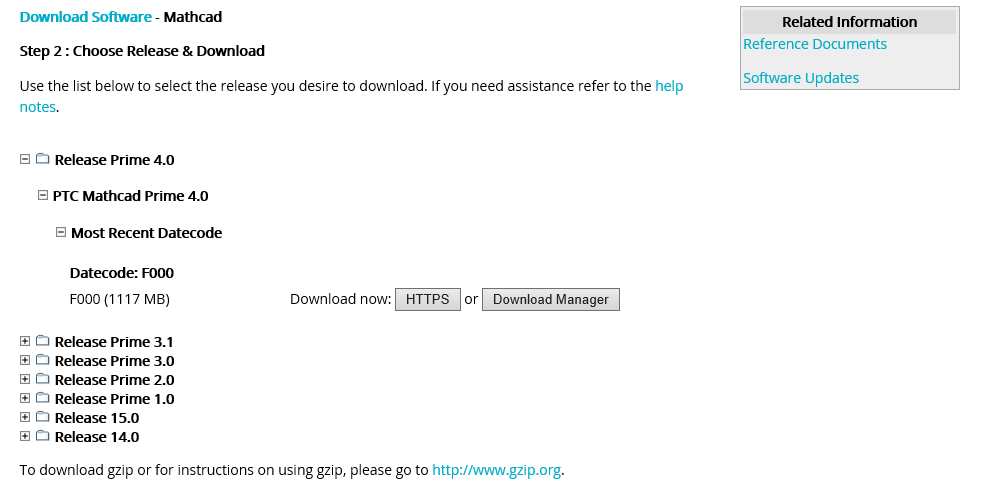 can someone supply  a link to down load Mathcad Prime 4? I'm hoping there is an express version.

You mean link for Mathcad Express 4.0?

As I see it, is just an old 3.1 version is available now:

Thank You for Contacting PTC | PTC

If you are an active customer, here is a link: https://support.ptc.com/appserver/auth/it/esd/product.jsp?prodFamily=MCD

Yes looks like you are right, hopefully they will expose an express version pretty quickly

Yes I have the 3.1 express version and use it, but I want the Prime 4 version, that is currently not available to download from the PTC website. I am presuming Prime 4 is only available to people with registered support accounts....

Prime 4.0 was released late on Friday. They may not have had time to add the link to the Express download page yet.

I have question: what is increased in mantioned hyperlinks functionality?

The what's new guide provided with Prime4 does not contain "hyper": I guess nothing has been done on this, as it is on a lot more improvements 'promised' for Prime 4.

Note that the original post in this thread is from over a year ago (march 2016). In the mean time PTC appears to have struggled to get Prime 4 out; finally probably deciding for time over content...

Luc is right. Plans for improvements have been constantly changing.