I'm just shaking my head. Truly. I've been making fantastic publication-quality plots with MATLAB for the last 20 years.  What in all that's holy is so hard about this?

Yes, we can really only shake your heads in disbelief . Especially as it seems to be too hard for a company with full fledged CAD and modelling software among their flagships. But PTCs intention obviously never was to position Mathcad/Prime as a stand alone program which competes with MatLab, etc. Guess they thought they just bought a small cute calculation module to integrate in Creo.

Maybe that's what I'll have to do, pass all the plotting off to MATLAB... Kinda defeats the purpose, eh?

Which purpose? The purpose we would like to use the program for or the purpose PTC sees in the program? Unfortunately, these are two very different points of view 😞

Well, yes, it's been discussed here before - the folks that quit the technical advisory committee in disgust, etc.  You know, I have no head for business at all - talk of budgets, cash flow, human resource allocation, etc, have me either perplexed, frustrated or asleep within 5 minutes.  So why the suits do what they do, I try to give them a break - I see what my owners go through as I work for a small company and am good friends with them.  You gotta keep cash coming in.

But this begs all description, truly.  As you noted, they can (presumably, every other solid modeling program can) photo-realistically render incredibly complicated assemblies.  I just found that plot component you mentioned, and suppose that I'll find the shortcomings you mentioned, but I can certainly take you word for it.

As I've said before, there is no reason a program such as this should not be on the desktop on any engineer that does even a modicum of analysis, from y = mx+b on up.  And truly, I'm pulling for them.  But yow, give me 15....

>Which purpose? The purpose we would like to use the program for or the purpose PTC sees in the program? Unfortunately, these are two very different points of view

I even struggle to figure out PTC's point of view.  If I accept that its mission is to be a plug-in to CREO, then why did they make a substantial investment in a new symbolics engine?  That money could have been spent on making it a better calculation and plotting tool for engineers and designers with enhancements for how it drives parametric models.  At least that would make sense for their intended customer base.   And then their enhancements tend to lose unit awareness - which is completely shocking to any user.  Lives literally depend on these calculations and they knowingly remove once of the most useful checks available.  Their vision isn't clear to me.

Oh my goodness.  I don't even have time to be doing this, but like a moth to a flame...

What in all that is good and true is that chart component? Seriously?  What am I missing here?  I've been half an hour trying to figure out how to get a trace to plot on the second Y axis. I have the second trace on the chart, but can't find any way to bind it to the second axis. You can't name your traces for the legend.  As near as I can tell, you can't move your legend or your plot title off the chart grid.  As Werner noted, don't even dream about 3D.

I set axis limits for the second Y axis in that flyout window you get when you double-click on the chart.  They did not change.  I set the Y2min and Y2max values in the Inputs area above the Chart - nothing changed.  If they were aiming for "intuitive", they missed.  So I thought, "Maybe I have to set Y1min, max first...?"  Oh no, Y1min isn't a valid variable name. Okay, it's Ymin & Ymax.  That set the limits on both the Y and Y2 axis and also changed the tick interval so there's no zero labeled...  Did they take lessons from the folks who torment us with Microsoft "Word"?

Ok, I'm new at Prime.  I get it.  But I've punched chads representing octal code out of cards for a Monroe-Lytton programmable calculator in 1972.  I've programmed FORTRAN, MATLAB gui's, AutoLISP, I've attached my own subroutines to ANSYS FEA solvers, done FEA in Mathcad (which I've used for the last 30 years), used all sorts of software for charting and plotting... I should be able to figure this out, right?

Sheesh. I gotta go back to paying, time-constrained work.  Just not with Prime 7.0 for now... Lessee, in 4 years they should be up to 11.0m I wonder what that will look like? 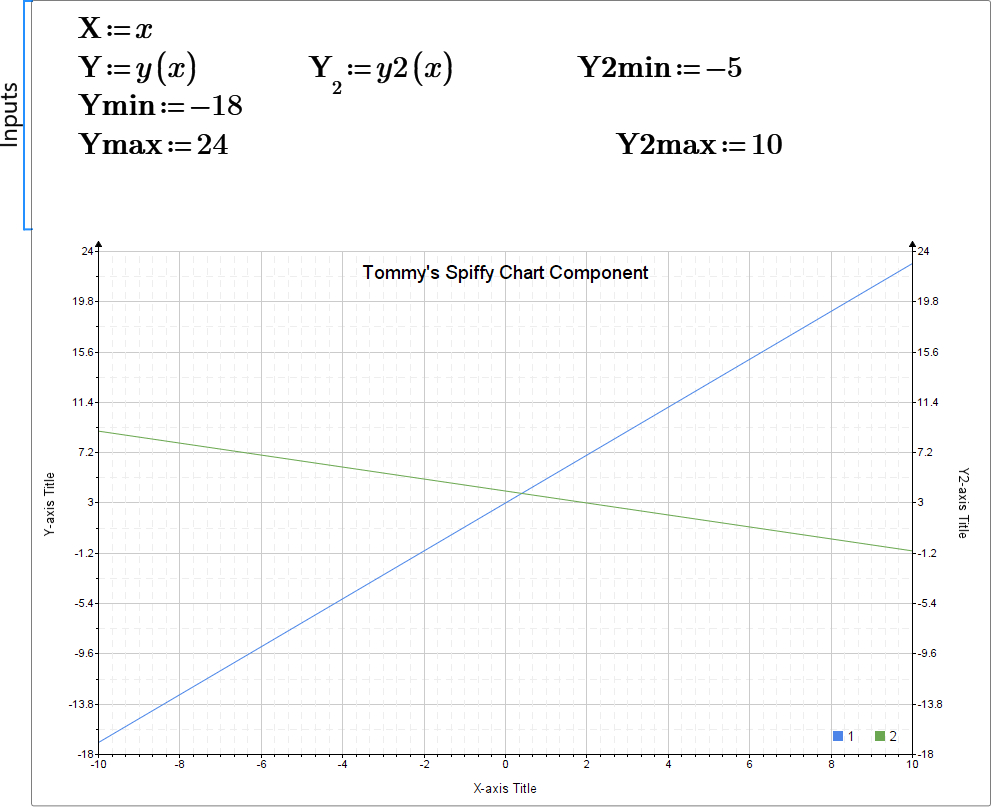 I'd add a caption but I'm speechless.

Ok, finally found the Y2 axis binding... and yes, you can name the traces for the legend...  But it's slowww.  and the cursor acts whackadoo in the flyout box dialogs, you can't see what you're typing.

NOW BACK TO WORK TOMMY! 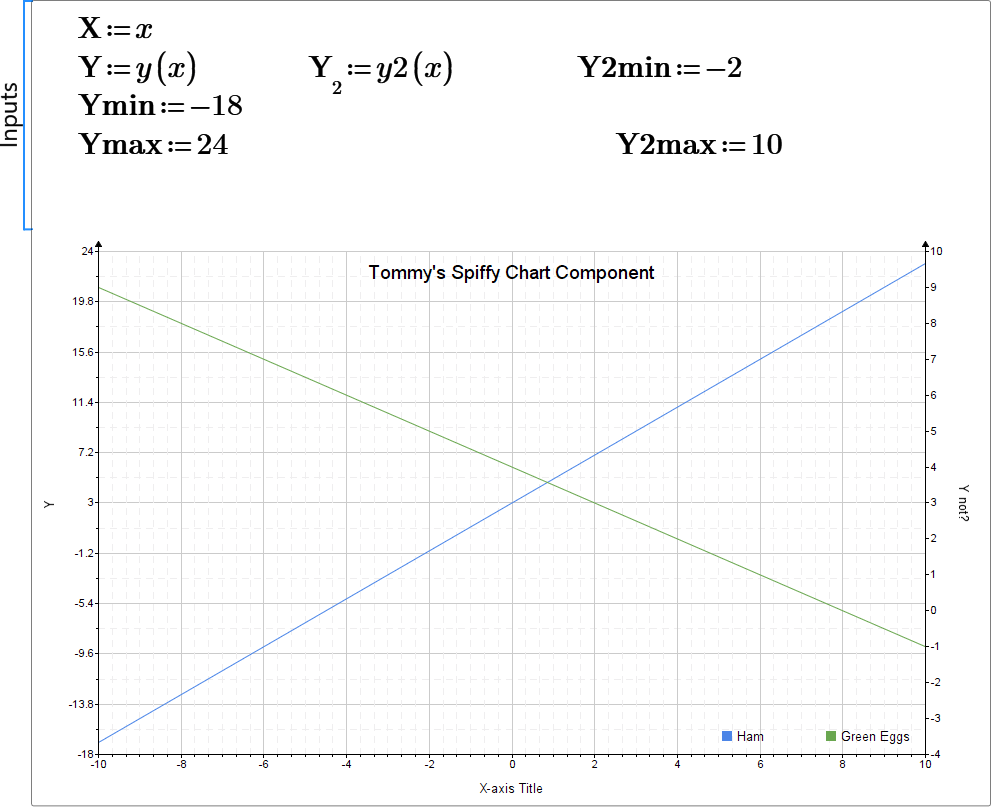 If Prime still doesn't have 3D graph it can be because the original Mathcads 3D is 8bit code and I don't think Mathsoft ever got the source for that code.


If Prime still doesn't have 3D graph it can be because the original Mathcads 3D is 8bit code and I don't think Mathsoft ever got the source for that code.

That would imply that PTC would be unwilling or unable to write a 3D module for Prime themselves.
But in fact, they actually did - unfortunately! There is a 3D plot ability in prime but its just embarrassing and an indictment for the developers.
The 2D graphic was not taken from the original Mathcad either, but created from scratch - again, unfortunately! The criticism of the missing second y-axis, missing grid, missing axis locking or legend, etc. PTC countered by sloppily and inadequately integrating a lame third party module into Prime.
I therefore believe that the real problem is not the lack of 8-bit source code.
0 Kudos
Reply
Notify Moderator

I think what they used was this: ChartDirector . It's not lame at all. It's used in this software, Peak Spectroscopy , where you would never even know it's a third party module. The only reason I know it's used there is because the developer is a friend of mine. The reason I think this is what PTC is using is that I laid into them about graphing, and pointed them to this as an example. Months later they told me this was in fact the best module they could find, and more than a year after that they released the new graphing in Mathcad. So sloppily and inadequately integrated, yes. The module is not lame though, PTC just (as usual) did a really poor job of using what was handed to them on a plate.

Interesting information - thanks. Seems to be a powerful library - just image what others would have been able to come up with using it.

I wrote "lame" because the module is reacting so slowly and its user interface isn't really intuitive but quite irritating in some respects. But of course it may not be the software to blame for but what PTC did with it - no surprise.

I was hoping for something like this (and, of course, unit aware, which is entirely a function of the interface between the worksheet and the chart, not the chart itself): 3D surface with units display . Of course, that's not what PTC actually implemented 🙄


I was hoping for something like this (and, of course, unit aware, which is entirely a function of the interface between the worksheet and the chart, not the chart itself): 3D surface with units display . Of course, that's not what PTC actually implemented 🙄

I guess most of us hoped for better.

On the other hand, after 10-15 years of PTC "development" hope already has died.

OK, so it is ChartDirector. I haven't had the misfortune to experience these graphs in Mathcad, because PTC booted me out of their orbit, and I'm not going to pay a subscription for a lame product.

The fact that they couldn't properly integrate a product like ChartDirector says a lot about the development team. Not anything good, but a lot.

This is almost unbelieveable.  Freeware symbolics engine, a top-notch graphing program in a crippled implementation (remember Axum?)...  Look, I know as well as the next guy that it's a LOT easier to criticize code than it is to write it, truly and verily, amen.  Been there, done that.

But coders can do a heckuva lot with the proper guidance and support.  They aren't getting it - these decisions, I think it has been made clear in other posts, are coming from the suits.

So we have a crippled 2D "chart" add-in, internal plotting capability that is crippled as well, and both work differently with respect to units.  If I hadn't seen it, I wouldn't have believed it.  These guys are starting to make the U. S. Congress look like a lean, mean model of efficiency and expert decision making!

This is terribly disappointing.  I can't imagine a computer without Mathcad on it, even in retirement.  They could have made something so market-cornering that the Justice Department would drop Google to go after them.  What a holy mess.

ETA:  Also in response to Fred and Werner below.  I didn't know it'd put the post right below Richard's.

"This is terribly disappointing.  I can't imagine a computer without Mathcad on it, even in retirement."

Me neither!  In their defense (and I suspect, by mistake) the free version of Prime remains a pretty fair version.  I suggest stopping at Prime 4.0 Express if you can--the only change past that is the addition of the banner slanting across every page.  (In 4.0 it's a footnote in the footer.)  With help (thanks Luc and Werner particularly) you can do some truly useful work!  All of the "features" that are being complained about herein are "premium features," and you don't have to worry about them!  I'm finding that solve blocks are puzzles to be worked around (the "root" function still works,) and the (very old) method of solving initial value ODE problems using arrays to define a group of definitions works.

It's crippled, but it's FREE!


I haven't had the misfortune to experience these graphs in Mathcad, because PTC booted me out of their orbit, and I'm not going to pay a subscription for a lame product.

If you are curious, you always can test drive each new Prime version for free during its evaluation period of about a month. But I guess you know that and you can happily live without that disappointing experience.

I also could not be bothered so far to download and install P7. Maybe I give it a try some day to look at the new dropdowns - but from what I have read here, they don't seem to be a big step forward - no surprise.

are you sure that this is ChartDirector? Unbelievable if so. Judging from the description on their website Prime's chart tool is nothing like ChartDirector. I've tried the chart tool on a large dataset i.e. in the order of 400.000 data points. Prime became so slow that I had to write a small routine to condense the data set otherwise the sheet would have become unusable.

Not sure if they bought anything. As far as I am aware, the new symbolic is based on the free FriCAS/Axiom, a fork of the former Axiom. Its distributed under a very generous BSD license which also allows for commercial use, as far as I understood.

Maybe FDS's point was that if they just wanted an add-on for Creo, they could also have  thrown out the symbolic completely rather than putting some work in the integration of a new engine.

Maybe keeping Prime alive as a stand-alone program is just a milking the cow to the max. As long as people are willing to pay for, ...