I have spent the last hour or two browsing the forum to find definitive answers to compatibility questions. I run Mathcad 11.2a and Mathcad 14 M035. I am happy with them both - and Mathcad 14 can read Mathcad 11 files. I have been with Mathcad since version 1 for Dos. From previous experience with Mathcad, I am loathe to ditch earlier versions before trying a new version - and I dislike the ribbons on Mathcad 15 and Office 2007 onwards!

I work as a subcontractor for a very large company who use Mathcad 14 (having previously used versions from 7 onwards). They have Mathcad 15 available but choose to stay with Mathcad 14. Other subcontractors are required to perform work in Mathcad using Excel components (i.e. Mathcad in Excel and Excel in Mathcad). There is a large collection of validated legacy analyses that are retained for structural justification.

New subcontractors are required to work with legacy analyses but cannot obtain the Mathcad versions for which these analyses (Mathcad or Mathcad in Excel) were originally validated. Furthermore, the integration of Mathcad and Excel changes with some Mathcad versions requiring re-programming.

Mathcad 15 is still available (if one purchases Prime 2). So the questions are, would a change from Mathcad 14 to Mathcad 15 cause compatibility problems when running within Excel or when using embedded Excel components, ? What is the earliest Mathcad version that Mathcad 15 can read? Are there any other restrictions that Mathcad 15 could bring?

I would like user feedback on this because I find PTC's comparison of versions is very inadequate - tending to be misleading.

My version of Mathcad 15 doesn't have ribbons and appears to work well under Windows 7. It will save down to Mathcad 11. I'm running both together at the moment, created a worksheet in M15, saved it in M11 format and opened it in M11 with nary a problem.

I haven't noticed any particular problems going between the two and most of my sheets work where SUC or other nannyisms don't get in the way. The Excel component works in both versions (Excel 2010) and I've just opened several Excel-based M11 worksheets without any problems in M15 - however, I'm not a sophisticated Excel user and I doubt whether I'm doing anything particularly challenging. I haven't used them, but M15 has WRITEEXCEL and READEXCEL functions, which neither M11 nor M14 have.

Unfortunately, I can't run M14 and M15 on the same machine, so I can't do a side-by-side comparison ... or even remember what M14 did!

I have 11, 13, and 15 on the same PC (12 was such a lemon version I didn't bother to install it!). I don't remember if 15 removed the other versions, but I think not. I think it only removes verson 14. Even if it did remove all versons, reinstall 11 and then repair the installation of 15 and you will be fine.

Verily, their cups runneth over on the same machine and they do wrought their marvellous works upon the same display ... O ye of little faith. 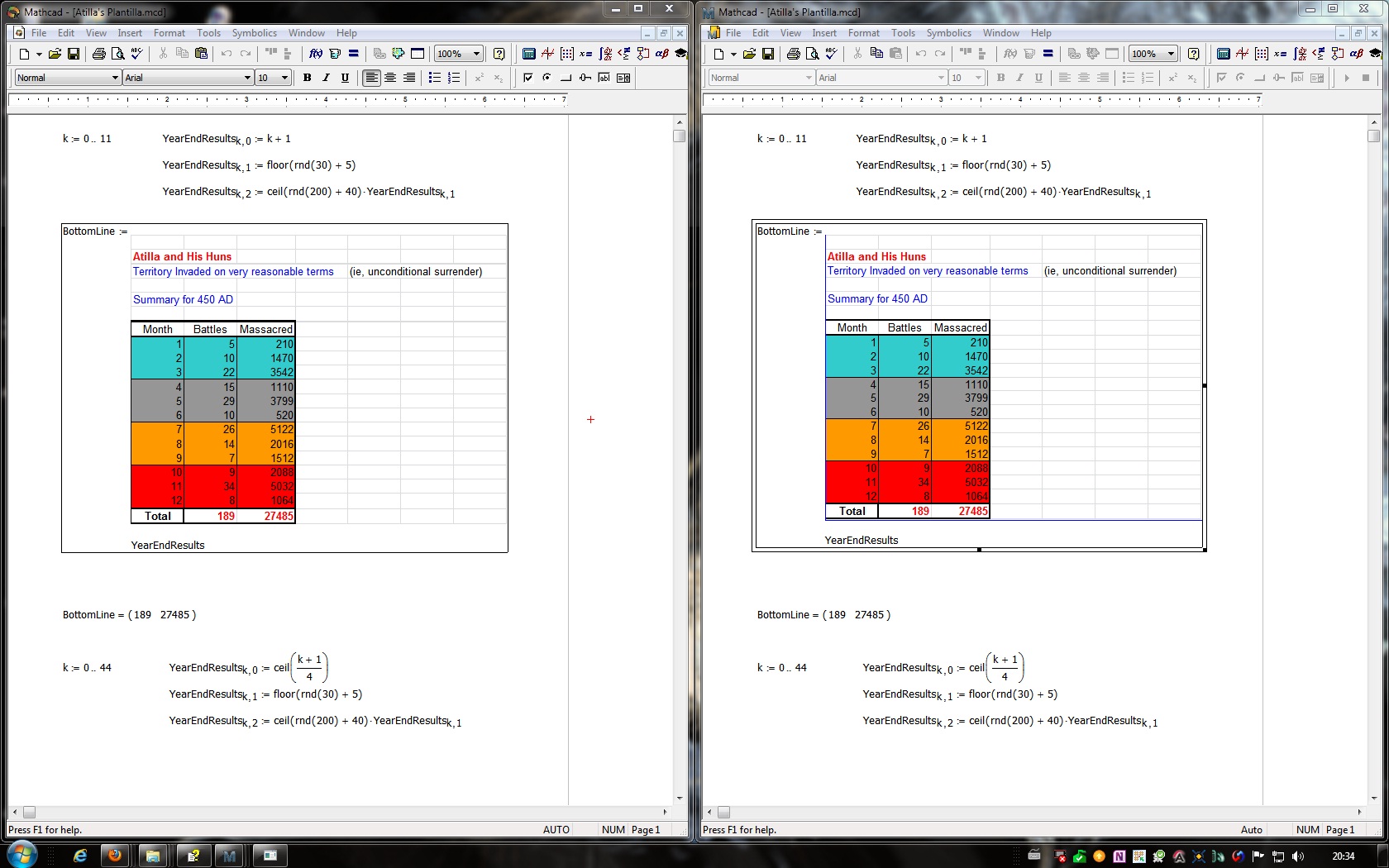 Mathcad 15 is really just another version of Mathcad 14. They added just enough to be able to claim it was a new version rather than a bug fix. So, as far as I know, if the Excel components work in 14 then they should work in 15.

I don't know what the earliest file version it can read is, but I have some very old Mathcad files, and it reads them fine (due to various changes over the years some of them no longer work, but I think you are aware of that!).

OK. So it seems I can buy Mathcad Prime 2 and get Mathcad 15 free, put Prime 2 on the shelf and install 15 (which will remove 14) and be left with 11 and 15 on my system. Everything should function as before without modification?

There's always a few that will need modification!

Probably the best thing to do is get a copy of M15, install it on one machine and evaluate a number of worksheets (especially the ones that may have presented problems in the past or are more critical to your business needs). The one thing I would recommend is NOT getting IT to do the evaluation, but have some battle-hardended actual users and developers, people who get the Nine Hundred and Fourteen Point Four metre Stare and start cleaning the guns at the mention of Excel.

So, 'in principle' no modifications then! With installs such as this, I always image my c: drive beforehand. I do my own evaluations - I have been in the trenches quite long enough!

I believe so, yes. I do not use Excel components much though, so I can't claim to have tested that aspect of it very thoroughly. But version 15 really is just another version 14. They added some DOE functions, fixed some bugs, made it compatible with Win 7. I think that's about all though.

My version component seems to agree with you!