Does anyone have info on the expected release date for Prime 4.0?  The latest schedule I saw said Prime 4.0 would be released Q2, 2016.  I'm guessing that's slipped, but wasn't sure how much. 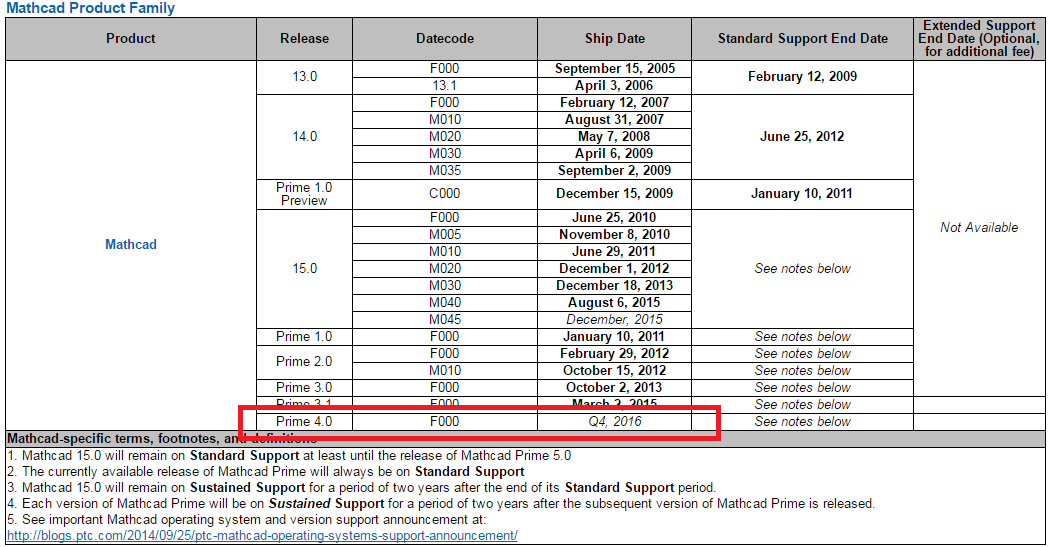 Thanks.  I had incorrectly remembered Q4 2016, but now it is evidently correct.

At the last event "PTC LiveWorx Europe 2015" in November of 2015 it was presented a roadmap for the development of Mathcad Prime 4.0 and some future steps (themes) for Prime direction. PDF "PTC Mathcad Roadmap_2015" can be found in attachment (and here:PTC Mathcad Prime Roadmap (2015 update)). You can see what updates are planned for version 4.0 (now the release of version 4.0 is scheduled for the 4th quarter of 2016 year) and is scheduled for subsequent releases after 4.0. New theme for Prime 4.0 discussion: Mathcad Prime 4.0: some new updates

I think this is a misprint, when PTC say they will release Mathcad Prime 4 in December 2016 what they really meant is December 2017. You have to be aware of the special coding PTC use when they establish release dates. I will send you a Mathcad sheet that does the conversion for you. Also, you have to take into consideration that the only person working on the core engineering for Prime 4 is the CEO's 8-year-old son.  Unfortunately, his annual Cub Scouts Jamboree is in December and a big scouting calendar year in 2017. Additionally, bear in mind that PTC still believed that when PTC purchased MathCad from Mathsoft that they thought they were buying a CAD software program. Just like AutoDesk when they purchased Revit. Mathcad they thought would complement their existing Creo product. It is sad that they still haven't realised that its actually Engineering Computational software. I wonder if the 8-year-old programmer will ever tell his dad that this is not the case?

Well my story may be "tongue in cheek" but my hunch is that I am not far off the mark. PTC are one of the most dishonest corporations that I have every come across. They milk their users for the maximum amount of money they can get out of them, but deliver them nothing in return. They cannot even meet their own published deadlines. I believe the US is bringing in a Law to combat money grabbing software corporations likePTC. In other words, software companies that put people on software contracts for so-called maintenance and support but in fact deliver no maintenance nor any support. I have Trump's personal email address, so l must remind Donald about this and see if we can but PTC high on the government's hit list.  A multi-million dollar fine by the US government may have an affect on them?  Well, I will see if the US government can fine then 64 million and then redistribute that money back to their Mathcad users.

A fine of that magnitude would be the amount they paid Mathsoft for the purchase of Mathcad. Maybe only then they will think of selling MathCad to a company that cares about its users. But I doubt it. This company is so internally focused and greedy it may see a 64 million item on its chart of accounts and think the CEO had gone out bought himself a new yacht.

Not happy once again.

I just had a conversation the with Mathcad sales guy for our region and he suggested that Prime 4.0 would be available around December of this year.  So, I guess they are sticking to the Q4 2016 release date.  Does anyone have a recent document listing the new features and fixes?

Here is a theme:

We now know what will be the MathCad Premium 4.0 release date and if the

I guess we can firmly rule out Jan 2017 even with the reduced number of features in the latest roadmap.