Whilst playing around with Prime, I noticed that some non-displayable characters seem to have the effect that one would normally expect in a string; for example, char(9), char(10) and char(13) act like tab, line-feed and carriage-return.   Here's an example (using Prime Express, hence the strange manner of its execution). 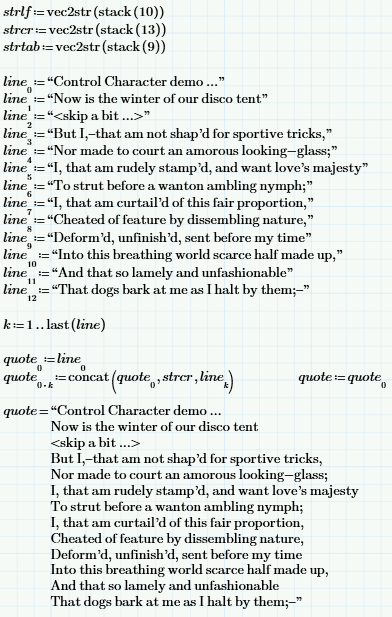 I hope this is A Feature rather than A Bug To Be Removed.   In fact, I hope it is but a prelude to further enhancement of Mathcad's string handling facilities, including adding formatting and an option to suppress display of the quote character.

[Should any of the more metaphorically inclined amongst you perceive any similarity between a certain mathematical application and the words attributed to a King Of England, I must point out that, being as simple in mind as any bear inhabiting hundred acre woods, such a comparison lies outwith my faculties, and, indeed, I am sure there is none to be made.   As one of Welsh ancestry, however, I can but hope that we see Prime Plantagenet replaced by Prime Tudor in the near future (despite the former's alliterative allure).]