Is it possible to do somehow the simplifications described below in Mathcad 11? 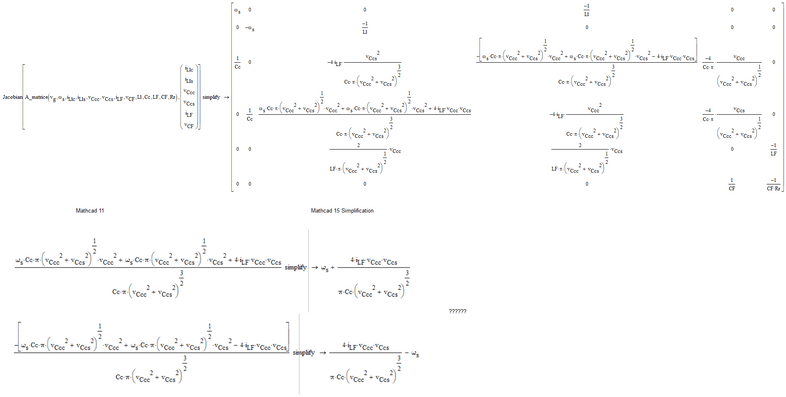 (The expression of Gc(s) is not quite visible in the image because it is a rather long-expression.
Look in the Mathcad 11 file to get a better look at Gc(s)'s expression.)

Can the expression of Gc(s) be further somehow simplified? that is, instead of pi to be 3,141 (or how close Mathcad is to pi or how Mathcad approximate the value of pi), and possibly other calculations to be reduced (to do the multiplication, division operations) so that the expression, if possible, is simplified.

It is very hard to control the output of the symbolic processor in Mathcad 11, and that is much much different in Mathcad 15.

There are some differences though.

Mathcad 11 will not generally produce the square-root operator, and user the power instead ( ^1/2 that is).

Mathcad 15 supportedly handles a few more directives to the symbolic processor, explicit being one of them.

Both support the directives symplify and collect, but the outcome is usually different.

Much of the sympilfication depends on the potential values of your variables. It may help a lot if Mathcad is told (using an assume directive) that a variable is positive (or negative) otherwise mathcad has to assume it might be complex.

Why do you want pi to be replaced by 3.14?  (If you really need that, you can use a substitute directive, but I should think that pi is much more elegant, and it maintains accuracy).