In text books dx/dt and d2x/dt2 are universally written as x with one or two dots over the x. Is there any way to accomplish this in Mathcad 14?

Unfortunately not. At leasat not the easy, natuaral way.

There are some discussions about this subject here and there is no real solution nor a development of the product in that respect. Evene worse in Prime one cannot even use the symbol for partial derivative!

But its only recognized as derivative inside an odesolve block.

Otherwise you get an "unknown variable" error.

But of course you can use that symbol to declare a new function whist happens to be the derivative. But then you could use the shift-ctrl-K method to define variable names using other diacritic characters.

I remember (but can't find) a thread. where Richard (at least I think he was it) explained how to get those diacritic characters above a variable and not aside as in my example. But I also remember that I never was able to duplicate what he did, probably due to localized Windows version I use.

The left was created using ctrl-F7, the right typing y and Alt-249 (on the numeric keypad) - not sure if that works for any keyboard layout. 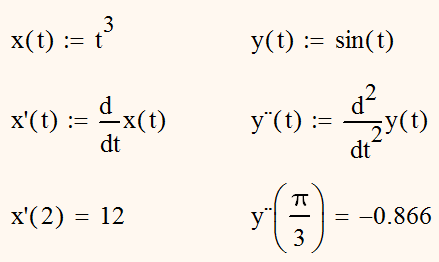 It is an especial numerical/symbolical operator in Prime. It works in and outside of the Solve block.

As people often say, that Prime is one step forward and three steps backward - this seems to be one of the foreward steps 😉

Maybe it should be added, that you can insert that operator multiple times to creater higher derivatives, too.

Sorry, but the ideom is "One step backward and two steps forward"

Unfortunately not in case of Prime 😞 sorry, too! 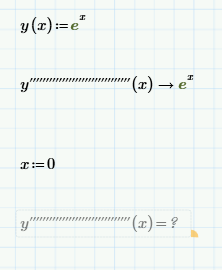 May be you will get the numerical answer