I would like to ask if such a thing can be done using Mathcad?.
Or maybe you are somewhere examples of these solutions. It's mainly about the analysis and time series and forecast using moving average (MA), autoregressive (AR), and ARMA.

Possible that my comments from this question will be useful for you:

Many thanks for your reply. Really appreciated.

The above is only maybe 50% of what it needs.

No Dickey-Fuller and Phillips-Perron tests

Maybe there are some add-ons,extrapacks,tutorials,workseets.?

You can bring this new and advanced capabilities for Mathcad in these groups:

Or by creating a new "Idea" here (but only if you have an active/paid maintenance for Mathcad): http://communities.ptc.com/community/mathcad?view=idea

Many thanks for your reply, see what we can do in there..

Maybe this could be of interest to you

Something is wrong with the indexes in the document ("armapq.mcd") for ARMA model: http://isc.temple.edu/economics/notes/timeseries/mcad_examp/armapq.mcd

Thank you for this link.

Yes, you're right. I don't think that Mathcad2000 (the version these files were made according to the site) was so much different. So I guess the file never worked. What is missing is the initialisation of the first x[i.

Changing as shown in the upper right seems to make it work: 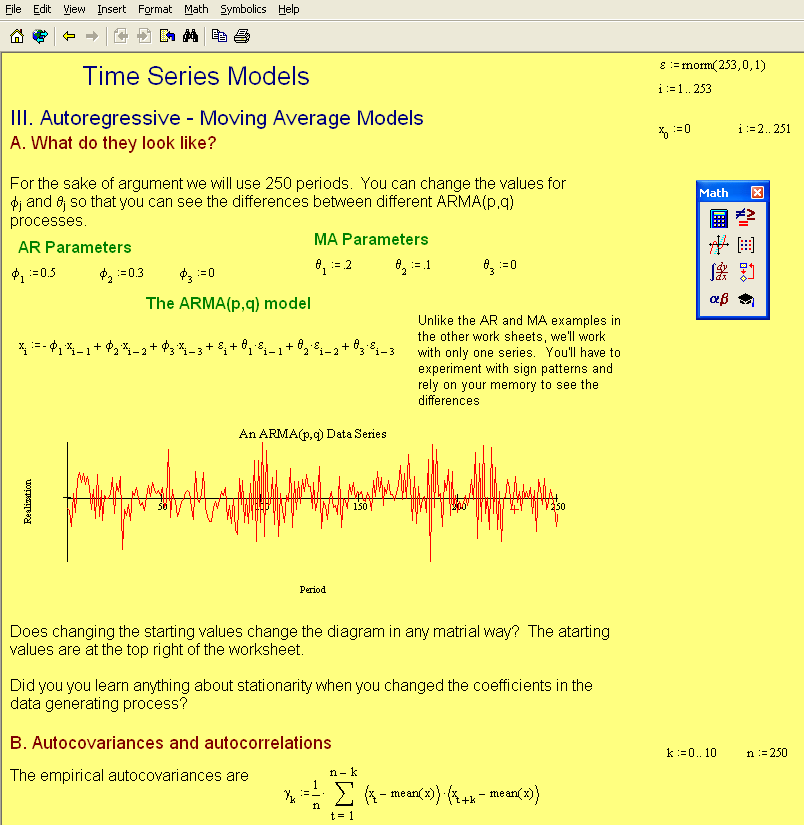 Thats interesting. So vector initialisation was handled differently in those times.

The error you found is that Mathcad 15 does not allow assigning x[2 a value which is based on x[1 in a situation when only x[0 is set to 0. Mathcad seems to see x as a one element vector at that moment.

I was in the situation of changing a document created with an older Mathcad version to make it work with the newer one quite some times, but I didn't ran across this situation before. Nevertheless I would call it bad programming style. The things I had to change in other files were things which deal with functions of same name not behaving the way they did in older version. As an example the function arg(). In older versions arg(0) would return 0 while in newer Mathcad versions you get an error as (annoying, while mathematically correct) the argument is undefined in that situation.