Re: Weird error messages in a formerly calculating Mathcad sheet

Mathcad uses two different engines to evaluate expressions. Numeric evaluations are done using Mathcads native numeric engine but symbolic evaluations are handed over to a software which is just licensed (up to version 13 this was Maple, since MC14 its unfortunately muPad). This explains the difference in the error messages. The symbolic engines also distinguishes what the expression is - I guess different subroutines in muPad throw different errors. To take the integral symbolically the expression has to be parsed beforehand to sort out what function and whats the variable of integration. During this process sin(x) or 5(x) is seen as a wrong pattern, so the message makes sense. BuI of course I agree that error handling in general needed to be improved (especially with solve blocks), though I don't expect to see any improvements and developments there in Mathcad 15. And Prime - thats a sadly chapter by itself. 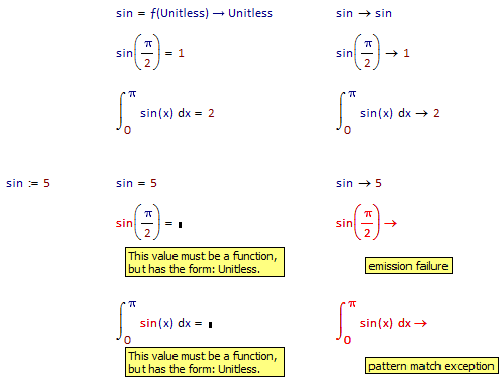 Just for fun the same in Prime 2 - and all has changed, but not necessarily to the best, I think. The symbolic evals in your sheet would have given you surprising wrong results without any hint that something went wrong. Obviously a constant as function "name" is accepted and treated simply as a constant, ignoring the argument. If thats on purpose it should also affect the numerics, if not, I would call it a bug. 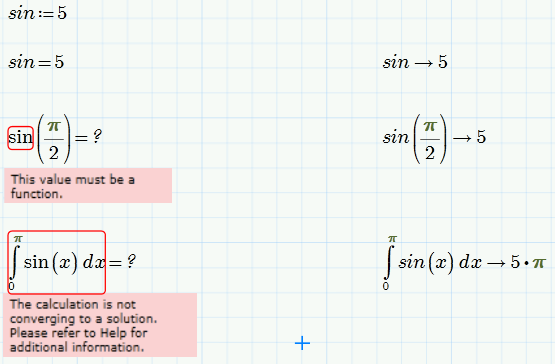