is there a way for mathcad to export images (of the math regions) with a transparent background?

but those have white background and i can't use most of my templates (for powerpoint).

btw, why ppt? we need to present it in class and a ppt presentation is required.

can mathcad show the substituted values?

it is easier to understand solutions this way especially when working with very long equations..

Not completely true. You can have dots, asterisks and other special symbols as variable by pressing ctrl, shift and k after a variable.

There was a thread the other week about the overbarred symbol.

Have a look at the attached worksheet. Keep the font either Times New Roman or Arial and it looks OK. 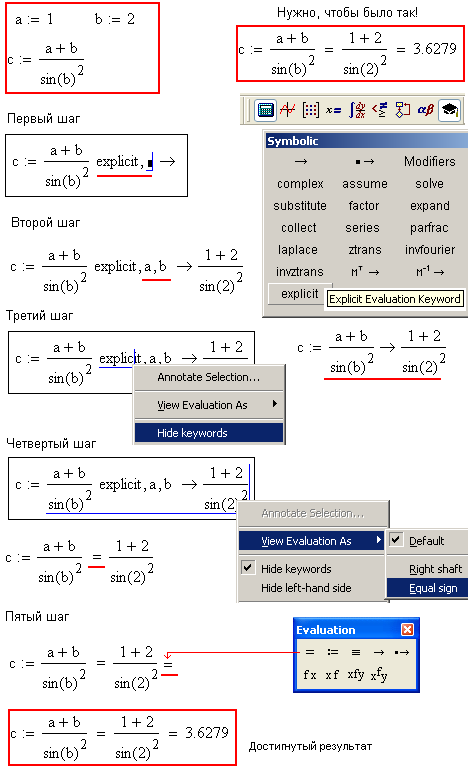 gLanzer
Newbie
(in response to ValeryOchkov)

i didn't encounter that explicit "function" in my reference book (eng'g with mathcad)..

btw, still no over bar and dots in mathcad variables?

also, attached is my another problem..

i know that mathcad computes T1 in kelvin,

but, can it show that T1 (in rankine or kelvin) in the explicit evaluation?

yet making T1:=40degF (given in the problem statement that's why i declare it as such) clears the error but

it shows T1 in degF (in the explicit,rpc,T1,k) which is partially wrong since the equation needs absolute temperatures (in K but R will do)

is there anything that i can do?

or am i just stuck in

Not completely true. You can have dots, asterisks and other special symbols as variable by pressing ctrl, shift and k after a variable.

There was a thread the other week about the overbarred symbol.

Have a look at the attached worksheet. Keep the font either Times New Roman or Arial and it looks OK.

Can't you highlight the region and copy that image. At least the background won't be white then.

You can just select regions and paste straight into Microsoft paint you know. Might save you a little time.

still has some white background..

PhilipOakley
Participant
(in response to gLanzer)

(for the general reader)

The background colour can be set by clicking on a blank (background) area of the worksheet, and then selecting Format>>Colour>>Background..

Unfortunately, at the moment (I'm using V14 M030), you can't set it to "transparent". However it does look like you have a workaround, and being able to set the background colour to a special shade is likely to help some folks.

Finally, if you press control before clicking on a region it will do a dotted line select, which is what you want for pasting direct into Word or Powerpoint - Don't forget to use Paste Special, otherwise the whole worksheet gets pasted as an OLE and you give away all your IPR !

- and if you receive a Word or Powerpoint with a Mathcad region or graph you shouldn't be double clicking to see if it is active and then scrolling around it...

I am unaware that this can be done in any Mathcad - Am I mistaken?

Yes "you are mistaken"

, It (being able to set the background colour) is one of the many hidden things you can do if only there was a good manual to read it from.

The "No" would be that the one colour you can't set it to is transparent !

Another hidden thing is being able to set tabs for text regions, which can only be done if you show the ruler, which then only appears when you are in the text region, and only then can you click on the ruler bar to place a tab.....

If you set a tab on the visible ruler when you are not in a text region you are setting the tab locations for moving the (red +) cursor around the screen for region initiation. But you can't align regions to those tabs

Also it's only at that time that you can show a green guideline for the tab (you have to be accurate with your right mouse click on the tab symbol in the ruler).

I use the ruler for aligning regions within my calculations. I find the feature quite useful to be honest, it saves trying to eyeball all the regions manually.

Just thought of another way.

You could copy the Math regions and paste into MS paint and fill the background regions that way. Not sure if the colour can be set to transparent, but it can be changed from White.

I usually copy at least 2 regions at the same time and then paste that into any office application. I use a grey background in Mathcad, but that doesn't show in Office, so it's transparent enough I guess. Every region pasted in the office application appears embedded in a container that tries to keep the object at a specific (page) location. In the office application I can cut the region contents out of that container, paste it elsewhere and delete the container. Then (in MsWord or Outlook) the region moves with text rather than trying to stick to a location.

The trouble when copying/pasting only one region is that I get a different object into office, one that takes substantially more time paste: it might be the complete Mathcad worksheet is transferred with a view/window on just the part that I tried to copy/paste. If I need to transfer only one region, I still copy/paste two, and subsequently delete the superfluous one...

Well, this is a very useful discussion...I have used variations of these methods. Never had to copy 2 regions...I usually copy one at a time, and it works OK. I recently found a problem that I couldn't get around unless I pasted into Word as a bitmap...when I use h_bar in my Mathcad docs.

I /can/ edit the metafile, but not satisfactorily. I guess that I have been for the most part "lucky" because I use the dotted-line-copy and paste method, delete the box (as above) and use the result. Works 99.44% of the time, except when I run into those pesky chars that don't translate well, even when the font is on y computer. I think that this is equivalent to using Paste Special>metafile.

The paste special method was actually given to me from a former collab member. Seems to work nice though.

Have you really been keeping track? Seems a unique percentage.

btw, any idea on how to seperate regions with the same spacing?

separate regions, and align regions are ok but not don't provide a nice spacing between two regions..

also, i apologize, i made a mistake on choosing the "correct answer"..

You gave it to me, or do you mean I shouldn't have it

i mean, if you click thhe 'go to answer', it points out to the overbar issue, not the trasnparent background issue you had solved for me.

Never mind, I still get the gold star.

Can you provide an example, not sure what you mean.