Ability to notify Administrator when a CAD Worker "Fails to Start"

Ability to notify Administrator when a CAD Worker "Fails to Start"

Windchill Admin should be able to get a notification when a CAD worker is set to "Fails to Start".

The article CS197982 allows to set properties to auto-restart a worker, however it doesn't guarantee that it will restart.

Especially in large implementation that rely on heavily on CAD workers it is a necessity to have the ability to get such notifications.

@aacciano3 Excellent idea. It would be good with more monitor options around CAD-workers. Ex. daily notification with objects failed to publish/republish.

We can setup a schedule to publish all objects missing representations during night time. This will republish jobs which have failed during first time. Here it could be good to get a notification to administrator with the jobs which have failed during the republish. The first time a job is not that important, but the second time will require an administrator to look at it.

I have created an article on this idea so anyone looking for this will be able to find this idea more readily:

@gwilliams does the OOTB notification VISUALIZATION PUBLISH NOT SUCCESSFUL fire when the problem is the CAD worker does not start? I think this is just a PublishServiceEvent/PUBLISH_NOT_SUCCESSFUL listener.

When I was trying to come up with a solution I wrote a listener that listened for PublishServiceEvent/PUBLISH_NOT_SUCCESSFUL.

If the CAD Worker did not start the event never fired so I moved on to a new idea and wrote a listener to detecting the creation of a new publishing queue entry and that worked.

The code works by detecting the creation of a new publishing Queue Entry. (I wrote a listener to do this)

Next, the code determines when the entry has finished execution (it's status is COMPLETED, SEVER, NONEVENTFAILED).

The email's body contains the text of the log so the admins can quickly see the problem.  We want to help the admins as much as we can.

BTW, probably don't need to bother with the reading of the log part.  If NONEVENTFAILED the guys should be informed but I do think including the log in the body of the email is very helpful so either way the log has to be processed.

That's how I solved the problem but would be interested in hearing other ideas.

That listener (VISUALIZATION PUBLISH NOT SUCCESSFUL) only fires when a publishing job doesn't complete successfully. In the linked article from the one I created, there are additional details towards that listener option.

That also does sound like an interesting way to detect the fail to start event. Lets keep the votes going on this idea and when this gets reviewed by R&D they will consider that option in their improvement process. Thank you.

The listener I wrote which keys off PublishServiceEvent.PUBLISH_NOT_SUCCESSFUL does in fact fire if the CAD Worker does not start.

I also did some more testing/interrogation and learned that this listener fires well before the Publishing Queue entry is updated with the info stating it is done executing in the dB.  By well before I'm seeing 20 seconds.

After the listener fires I start a very simple workflow that sends a Task but ONLY if the issue is the CAD worker does not start.

The Task is sent to:

1. the user who initiated the publishing job

The task includes a link to the object that did not publish as well as the WVS Job Monitor log generated by the publishing job. 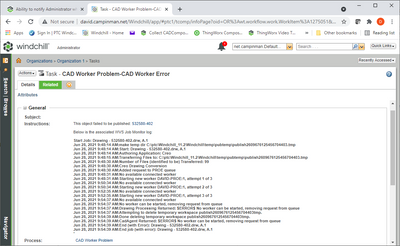 This is the workflow.  Pretty simple. 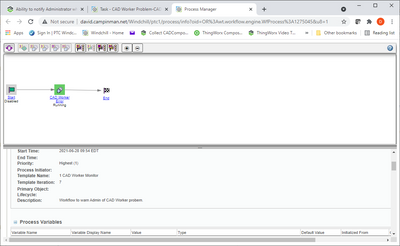