Actually users have to manually select and lock objects in the Workspace which they do not want to modify.

A good example for these obejcts might be standard parts or drawing frames.

Add the ability to "lock" these objects in Commonspace - means they get locked automatically (inherit the lock) whenever they are added to a workspace (regardless which workspace).

The ability to lock objects in Commonspace should be a special permission included in the "Administrative" permission.

In case an adin user wants to modify these objects he would need to first unlock them, modify them and then lock them again.

I would also love to deny "save as" for these "locked" objects - so we could prevent copies of drawing frames, standard parts and other stuff that shouldn't be duplicated.

Another idea is to introduce a preference which locks objects in workspaces that cannot be checked out by the user. This would be a quite similar feature than in Pro/INTRALINK 3.4.

Yes the function could be combined with the context where it is located (e.g. Library/Standard_Parts) and the role for this context.

This has been a long standing request from our company. I hope this new method of providing PTC feedback gets some movement. The situation isn't always so simple however because our NPI's produce massive amounts of churn and therefore the latest configuration results in a lot of things that 'want' to regenerate. The catch then is which regeneration paths are legitimate and which ones are illegitimate. I think it would be a step forward for some of our users to have it automatically lock. Indeed a few of the higher level assembly manipulators have built into their sequence of work to manually lock everything immediately after adding to workspace anyway. But the whole connection of PDM to a parametric dataset with associativity plus users abilities to make unwanted external references makes it almost impossible to have a one-size fits all solution (unless PTC can figure that out for us too!).

I created this related idea as well:

In 10.1 a preference was introduced to automatically apply a workspace lock to items that are not being checked-out in order to set these to read only and help prevent inadvertent modifications being saved to the workspace.  The preference can be found in the preference manager:

I agree it would be great to add additional intelligence based on ACL and set th lock automatically where it is known that a user doesn't have modify permissions.  Having a commonspace lock is another worthy improvement as well.

Additionally I am not sure if using ACLs is the easiest way for administrator to prevent an wanted changes or copies of certain objects.

But I also see the need to lock selective objects by default when adding to the workspace.

This should be preconfigurable by libraries (or products) but also by single objects (or folders).

It should be configurable by the admin depending on the context if the lock can be removed by the user or not.

The same applies to the "save as" function! Since we want to prevent the users to coping standard objects. Instead these objects should be set to "reuse" by default when copied and this reuse should be changeable by the user if he is allowed to do this.

Otherwise you cannot reduce the number ob duplicated "screws and bolts" that are created accidently by the users.

I stumbled upon Windchill "subscription" functionality a few months ago.  It can perform some of the functions others are asking for here.  Windchill will send you an email if somebody tries to checkout/checkin an object or if a copy is attempted.  It also will let you know if a subscribed object fails in the publisher.  There are a couple more functions, but these are the three I use.  We also have a group in our company using it based off a state change to release, so they know when to coordinate bidding with potential suppliers.

Another good example is tracking a cad object which has an issue where the owner was asked to repair it.  The subscription allows for comments to be included in the email.  In my case, the owner checked it out 4 months later and I was able to send them a friendly reminder to complete my request which I could quickly verify after the checkin notification.  (RELEX or FRACAS users will like this!)

Stephen, Under our current configuration we have found that if flexible components are locked in the WS that the components will display in their un-flexible state.  For example, a spring with Free Length of 2" installed at 1.5" will show in the assembly at 2" thus overlapping with the geometry around the spring.

After opening a PTC call we found that if we set the config option regenerate_read_only_objects to YES, it does display correctly.  The problem is, if an object is locked locally, should it be allowed to regenerate?  The instinctual answer is no, it shouldn't.  Unfortunately the PTC rep could not explain the advantages and disadvantages of the option.  Does 10.1 behave the same way toward flexible components when they are locked in the WS?  Does the option you described above account for this?

Has anyone found a problem with with setting (or leaving) this config option at YES?

That config option allows the geometry of a locked object to regen (change) based upon assembly references, but does not allow the change to be saved to the workspace. I'm not sure of all the possible ins and outs, but it's designed for the use of flexible components.

If you want to control external references, their are several config options as well as model setting that can help. If you apply them along with Model Check enforcement with Windchill, you'll get pretty far along the path you are looking at.

In Windchill 11.1 M010, which will be released in June 2018, PTC has introduced a new server-side preference:

Workspace > Add to Workspace and Check Out > Smart Lock Objects in Workspace.

With this preference set, the system will automatically add or remove the workspace lock on objects in a workspace. Actions like Add to Workspace, Check out, Update, Refresh, Synchronize, Open from CAD tool and Undo Check Out will update the lock status.   If set to READ ONLY, the workspace lock is set or unset for objects that:

I hope this will help prevent unwanted modifications.

I have a situation that when a part is locked in the WS I still see it regen in the message bar, anyone else see this?

Creo is designed to regenerate what it requires.   The workspace lock, in this case, will prevent SAVING the model; but not always the modification during regeneration.

Try setting the config.pro option, regenerate_read_only_objects to no (the default is yes) and see if you have a better result.  It dramatically reduces the number of read only models regenerated in session.

I am sorry I should have said I have the objects locked and the regenerate_read_only  no settings.

If there is any options to lock the CAD object automatically after checkin back to workspace.(non creo CAD tool)

Your inquiry is very timely.  With Windchill 12.1, tentatively scheduled for release later this month (December 2021), we have introduced an additional "ALL" option to our Smart Lock preference that will do exactly as you are requesting - Relock an object after it is checked in.    I have embedded an image of a slide introducing this new feature: 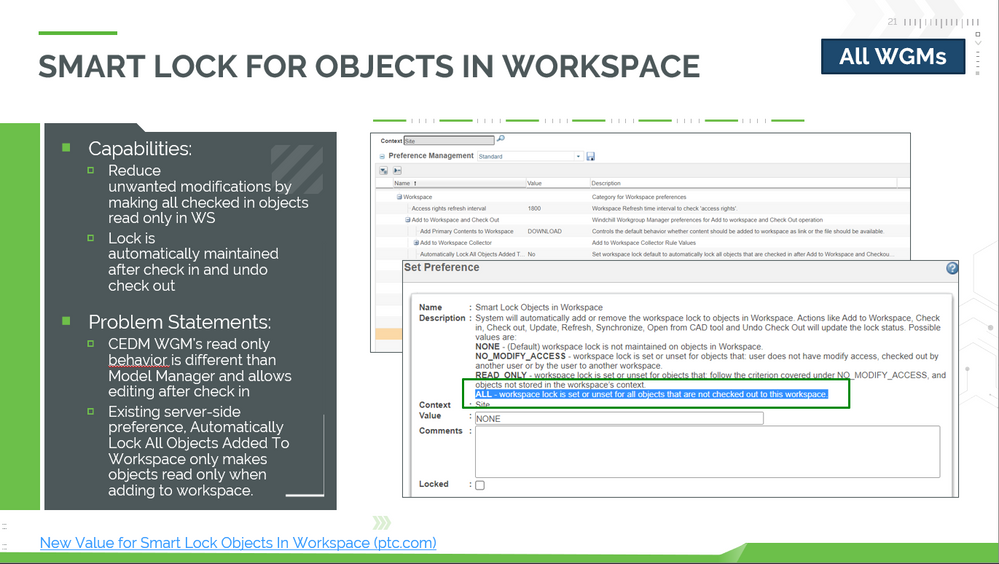 Thanks for the quick response.

I glade to hear this, we are using 12.0 we'll try to upgrade it and let you know.