OOTB a rework is setting back all objects to INWORK/REWORK state. In case multiple objects, e.g. multiple drawing or just two BOMs are linked as resulting objects all of them will need to be checked again.

OOTB this can be approached in two ways:

1. With the special instructions or comments it can be communicated which and what to check

However it would be more secure and efficient if only objects which have an issue could be marked as rework and get a INWORK state.

Therefore I recommend to add a new boolean attribute on the resulting object (change record) and provide a check box to mark it for rework. A comment field would be as well handy to specify the issue only for this object in case multiple need to be reworked.

Same applies more or less in the change audit if this needs to be reworked, however in this case the change might impact other objects as well which might not have been foreseen at that time 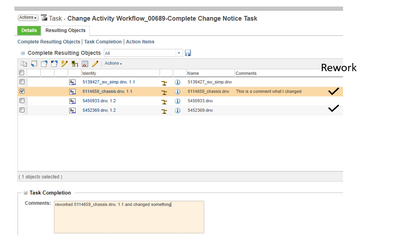