we are often facing situation when via change task releasing dozens of objects but not all of them having the same LC state. I mean situation when all objects been revised to "In work" state but:

It is very complicated and time-consuming to sort out all objects in change task and set up proper state for each group of objects. We would like to have an option "Previous revision". 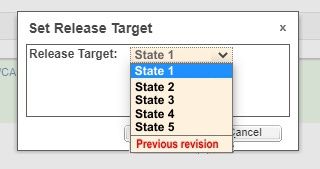 This function will automatically set up the same state like it was in previous revision. It would work like in a case when object has been revised from "State 3" => "In work" so function will set up again "State 3".

Using this option when all objects preselected can send them back to the same states without manual selecting.

Why do you have multiple release states?

What am I missing in this request?

All of our drawings go to a single state of Released from a working state of pre-release for numeric revision designs. (For alpha, the designs go from Design state to Prototype state.)

We have a total of 6 states in the LC, but the rules limit where a promotion can take a design to based on revision. When we do a promotion request, they designers are only offered 1 state to release their design to.

Our LC states represents manufacturing process. We work like this:

- revise all of them to "in work" and modify (checkout/in)

PS: All objects in resulting objects table are "in work" so you have to find out what was previous state for each object (looking into affected objects table to see previous revision state)

New option "Previous revision" can set the same (proper) state by 1 click instead of digging which state was the former one...