As an administrator, one of the most common frustrations of my users is knowing:

This proposal would place a new column in task tables, both individual users task tables and in context task tables. The column would be titled "Viewer" and would contain a link that would open a new window with a simplified version of the workflow. This simplified view would only contain assignment activities, no block, process, connector or robot nodes. This simplified version would have to be configured seperately. It would be similar to Process Manager in that it would have highlight colors for where the workflow currently resides and what has been completed but would also add highlight for next activity/activities.

Although not shown in my graphic, selection of the node in the pop up window would give a temporary pop up window similar to the thumbnail viewer with information for assigned user or potential users and basic task information. All of this would require up front development work by the administrator and would need to be linked in some way to the activity nodes in the workflow template. For instances of current location being at a non activity node, it will only show green and yellow for completed and next activities. Users would be trained to know that means the workflow is in process between the activity nodes.

I am not sure how the issue of activity nodes within embedded process nodes could be resolved as the process nodes are embedded in several different workflows and as I write this, I get the feeling that it is a longshot but I am going to throw it out there and see if it sticks.

I expect many administrators might not want to go to the trouble to configure this but I know that if the capability was there, I would love to provide this for our users. Our workflows are commonly refered to as "The spider web" and it would be great to be able to give users a simplified view.

Don't know if you are aware of this. But today you're able to link a picture to the workflow. That will represent the "simplified" workflow as you describe ..

totally static, but may be it can help your users to visualize easily where the workflow is ...

I greatly appreciate your input and I was not aware of that. A static picture would be better than nothing.

Does that display in a seperate column in the tasks table? I couldn't find one that was immediately evident by name. Also, I assume that is configured in the workflow template somewhere. But that also was not immediately evident.

you can set a different picture in each workflow template, and create a picture per loacle if needed.

This picture will be available , not in the task list of the user, but on the info page of the Primary Business Object. On the process tab , process history sub tab, right mous button, open process monitor.

If needed, this action should probably been added by customization on other table ...

I was aware of the process monitor. I was hoping you were talking about something else.

While that is probably still better than nothing and I may go do that at some point, still far from the functionality I am looking for.

Seems like it would not be too hard to at least make it possible to make that a link in the tasks table.

If nothing else, a different picture could be created for each task and linked directly to assignment tasks in the workflow template. Each task has its own picture.

It would not be as good as dynamic updates but is perhaps, more feasible a request.

And may be it can be done OOTB, by adding a worflow task variable where you set an URL to the individual task picture. And stored pictures in an authenticated place in the server codebase...

Location is the biggest issue. Non of those options put the information where it needs to be.

Appreciate the alternatives though.

Workflow activities need to be sub-typables.  to be able to add some new attributes, visible in the task tab ...

Anyway,I think your requirement (with static images) can be done by a little customization:

- a task variable with name and path of the picture

- and a datautility for building a column in the task table that points to the picture of the task ...

While not as simple to access, and without color coding for the next activities, you might also consider promoting the workflow process manager: 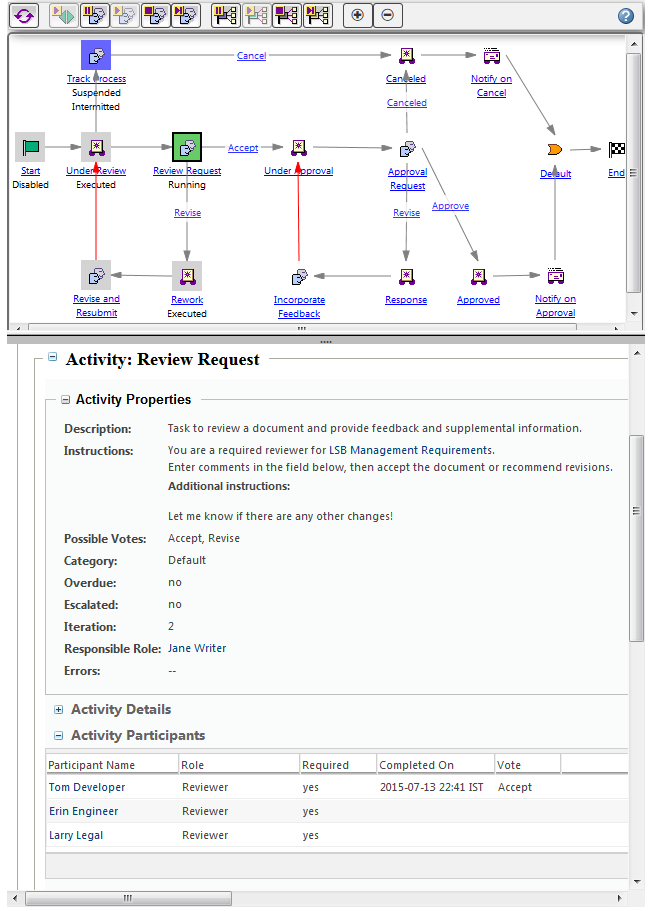 You can set a preference to allow all users access (in read-only mode). And as of 11.0, it's rendered in HTML rather than Java applet.