Where Used Report - is it the latest?

Where Used Report - is it the latest?

Wouldn't it be nice to know (or filter out) objects where the component is no longer used in a Where Used Report or in the information page for CAD Documents?  It would be nice to at least have a column to identify if it's the latest or what the latest version is.

You can create custom attribute, extends DataUtility base java class.

Thanks for creating this Stephen, I had this as an enhancement request in the old system to add a configuration setting to only show objects where the latest version contains the objects.  I've wasted a lot of time looking at assemblies that don't have the object I'm looking for.

I had created an enhancement request too.  I don't understand PTC not having this at least as an option.

like for example between the drawing CADDoc, and the 3D models CADDocument.

If a model is removed from the drawing, have to look each drawing to know if latest or not ...

I wonder if there is any update to this since it's been over a year since this post was created.

yes it would be good to know if PTC has listened to us.

It seems to be a very much needed functionality

Where Used Report: Add ability to show column "Out of Date"

And voted for this one now.

I entered this community to submit the exact same idea.  It is needed for CAD objects as well as WTParts.

This has been added to the backlog and is under consideration for a future release.

That is good news, Really it is needed. When you say under consideration, does that mean it is going to be implemented or the product development team may end up saying that they do not want/can't implement it ?

When it is implemented, will there be patches available for older version such as 10.1 ?`

Great!  I just had a discussion on this again today, so I will most likely be requesting a patch for current versions when it's available.  Now, it needs to be discussed as to how this might be implemented as there are several routes this could take.

I think most of us will want a patch rather than upgrading to what ever version.

Hopefully PTC will consider this and plan accordingly.

It should not be complicated to enhance this table in a patch without upgrading.

The WTpart where used table already have this feature. With a drop down list to select the filter "All revisions" or "Latest".  The only gap in this table is that it does not show correctly all where used when using BOM Alternatives (A case and R&D discussion is in progress to fix it)

For CADDocs it is easier as they have not Views or Alternatives ...

Hope they will do it rapidly, even if a custom datautility is not hard to do for just displaying a new column with LATEST=yes or no

Even, if as reported, it is easy to create a custom DataUtility, it is a customisation and as End User avoid as much as possible customisation. It should be a patch which is supported by PTC.

I would also like to clarify what I and surely many people understand by latest. I have been caught sometimes in the past with PTC's different understanding.

For me latest is latest version and not latest iteration of a revision.

Does that make sense ?

Terminology is very important. Not sure if I express myself correctly 😮

Agree with you Chris.  LATEST is the latest version , and not the latest iteration of a version.

The WTpart where used table behave exaclty as you describe.  If you select "latest" filter. It will display only latest versions.  ie only the latest assemblies where I have to check impacts . The others assemblies are not using my component anymore ...

Chris, is your system showing the old rev?   Mine is.   Since that is not intended, in means I have something in my environment that is causing it to show or there is a bug in our build. 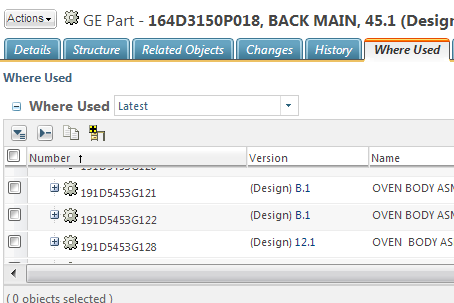 You are showing WT.Parts, the idea is around this functionality for CAD Objects.

Understood Steve, some of us are seeing the same results in WTPart AND CAD Objects. Others are only seeing it with CAD Objects and their WTParts are fine. Either way there are some inconsistencies that need to be addressed on all types, including related document links, which does not have a Latest option at all.

which release and more ?

Except when having several BOM Alternatives and Usages in MPMLink.I've a call and SPR on this table, cause it shows randomly Alternate Manufacturing views ...

We are currently on 10.1 M040, but came from 10.0 and had the same issue there.   We are using a subtype of WTPart and we have a non standard revision scheme.  I am guessing that one of those or a combination of the two is contributing.

we also use some subtypes of WTpart and a custom file base version schema ....

Anyone knows which version of PDMlink has this features or where this enhancement request stand within ptc.

It is close to 2 years since the original enhancement idea been floated by Steve.

not yet fixed for the CADDocument "where used"

Only for WTpart where used

Is there any update on this?  It has been at the "UNDER CONSIDERATION" state for quite some time.