Status: Under Consideration Submitted by mblum

If an user drops a block on an internal block diagram a new part is generated. That`s the intended functionality. We noticed that a common fault is the unintended multiple creation of new parts by users.

An information for the user that a part with the same type is already in the model would be helpful to avoid multiple parts in the same IBD.

There is already a part typed with this Block in the model. Do you want to use the existing part or create a new part?

This would make modelling live much easier!

Looking forward for this feature!

We already have this requirement in our database with the ID: ART15-22892042 and are considering for a future release.

I have added BMW to the list of customers requesting and upgraded the priority.

There is a workaround which achieves the same thing but requires a slightly different process:

Use the BlockProperty toolbar button and right-click on the canvas. It will then prompt you to choose an existing part or create a new one.

the proposed workaround generates a new part. Only the use of new Types or existing Types is possible to choose.

Adding existing parts only works via “populate block properties”. But in this case I get all existing parts. So the user has to find the necessary part in the package or part browser. This already caused a lot of trouble to repair the model because the users used the button or generated new parts by pulling a block into the IBD.

Confirmed that the above workaround is available in Modeler 8.2 and above (see image below). Feature is not documented so we are planning to add to the Help. 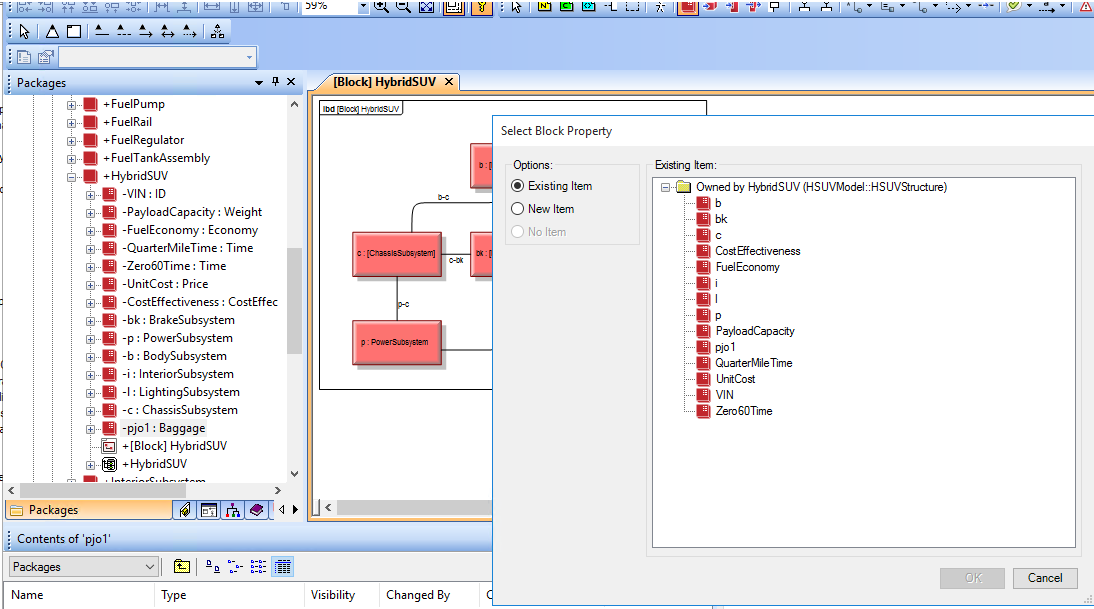 Other option is of course to drag and drop the existing block property from the Package/Part Browsers.

Correction to the above, both functions described above are covered in the Help in the topic called "Internal block diagram (SysML diagram)"

14-Alexandrite
Status changed to: Under Consideration