How to restrict duplicate Promotion Request for an Object

How to restrict duplicate Promotion Request for an Object

Has anyone come across the below scenario. I would like to understand more on this.

As far as my understanding is concerned, I dont think there is any OOTB setting/preference/command to let you do this (disable another promotion request if one is already running).

What I guess is, you can write your custom validator and hook for OOTB Promotion Request action.

In this class you can put your logic to check whether there is existing Promotion Request running on the object.

I hope this answers your concern.

If the lifecycle is correctly set up, on creation of a Promotion Request, the data on it will go to the "lock" state (e.g. Under Review).  There should be no Promote transition at that state, which prevents another PR from being created.

Note: OTB, there is a bizarre behavior in the lifecycle admin UI that fills in the Promote transition from every state to every state on the first SAVE of any new Lifecycle template.  Absolutely amazing that this remains there after all these releases.  Have to explicitly remove Promote from the lock state to any other state.

@MikeLockwood
I think one thing that would certainly help would be an Icon indicating that this object was on a Promotion Request just like they show up on ECRs and ECNs.

Which now makes me wonder if we could make them appear....

Upon Rework, can you have it go to another state (like Rework) instead of In-Work. I think this will help you achieve the requirement.

I know this is an old thread but it's still relevant.

There are a few ways to stop duplicate active Promotion Request.

The user would see something like below if using either a listener or a custom form delegate.

In this example, the seed is the only object that is not on an active Promotion Request. 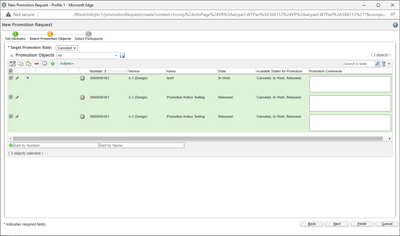 Upon select Finish, the user is return the follow and they cannot continue until they remove the two problem promotable objects. 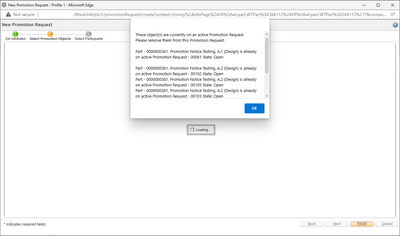 Something to think about.

Wanted to add this to my post (but Edit option had timed out), if you go the form delegate route, you should use two delegates.