This feels like the right time to publish some of the work I've been doing, on and off, over the past year.
Prime Express is the free for life edition of Prime. And because it's free, it's crippled with respect to the full edition that is itself more or less crippled with respect to Mathcad. Numerous functions in Prime are declared 'Premium' functions, and they will not work in the Express edition of Prime. Among those are some very sophisticated functions like rkfixed (numeric approximation of differential equation) and polyroots (find roots of a polynomial), dft and idft (forward and reverse discrete Fourier transform), but also ordinary functions like Re and Im (real and imaginary part of a complex value), mean and stdev (of an array or matrix).
Mean and stdev... Premium functions - Seriously? It's a joke!

In the attached Prime 4 file, all of the functions named above, as well as many others, are implemented. This includes all of the Bessel functions, and probability distribution functions, not just mean, but also other variants like hmean and gmean, median, percentile, histogram, intercept and slope, many of the signal processing functions dealing with iir filters, many of the image processing functions, some of the curve-fitting, smoothing and data analysis functions and of course coordinate transformations.
You can use many of these exactly as in the full edition, some will require some extra precautions, some will have limitations.
If you are a Prime Express user, you are welcome to use this library to your advantage. That is, you can use it in full, or just copy those functions to your sheets that you actually need. It's a big library, so it adds size to your sheet and (considerable) time to loading it! When copying functions over, be sure that there are some dependencies: some functions require other functions to function. You'll find out the hard way if necessary.

What do I ask in return?
- I never put money in PTC, so I'm not allowing you to make money by selling my worksheet. (It's ok if you make money by using the functions in a worksheet, either private or for your professional work, but you are not allowed to sell the worksheet itself. You may distribute the attached worksheet, but only free of charge. It may be better though to publish the link to it, see below why.)
- I did this work because it was possible, I liked doing it, and I learnt a bit from it here and there. Let me know if it helps or helped you; (I like Kudo's).
- If you come across a situation where you think, or know, there is an error, an omission or anything that can be improved, please let me know. Wherever possible I'll publish an updated version in this same post. If you want to help improving and/or expanding it under these same conditions, you're welcome.

Correction regarding errors when using units in the hist() and histogram() functions.

Attached is a Prime 3 file.

Theres a lot of work in this sheet.

Thanks for sharing this, Luc!

I have created same work in 2014 for Mathcad 15 and SMath - a set of function water/steam property and more.

But I use for this one my site and user's references on it! Those function's users send me new versions of H2O.xmcd file and I put it on my server!

See please the picture and the attach. You can insert in this file new interesting function and send me the sheet. I will put it on my site.

Now I am doing this work for Mathcad Prime! 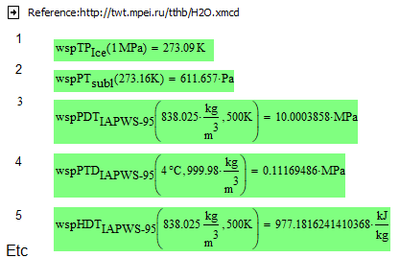 I think some of the abuse prime is getting is a little unwarranted.

At the end of the day, they cannot give away all the functions, ability to create functions in a non paid product. It’s not a charity.

I am looking as SMath as an alternative option source option which is great, but it is very very limited.

I am subscribing to prime and to be honest as a platform it works.

You realize for instance that SMath does not give an option to referennce worksheets? No filterNaN function. You cannot copy and paste to excel other to anything other than an image. It’s still 32 bit with no multi threading. No labels optioN. No ability to change font.

@tslewis wrote:
Thanks for sharing.

I think some of the abuse prime is getting is a little unwarranted.

At the end of the day, they cannot give away all the functions, ability to create functions in a non paid product. It’s not a charity.

I am looking as SMath as an alternative option source option which is great, but it is very very limited.

I am subscribing to prime and to be honest as a platform it works.

You realize for instance that SMath does not give an option to referennce worksheets? No filterNaN function. You cannot copy and paste to excel other to anything other than an image. It’s still 32 bit with no multi threading. No labels optioN. No ability to change font.

Prime Express (the free version) is not the issue; the arrival of a "Mathcad reader" is a good thing.  The issue I have with it is the apparent randomness of what's "premium."  It can do integrals, but the function "mean" doesn't work?  Really?  And, as Luc pointed out, with a little ingenuity. . .

The main issue is with Prime as a fully paid program.  The inability of Prime (after six tries) to compete with Mathcad 15 only illustrates the lack of commitment to bringing the program up to its potential.

I  really do not care what the type of an application is. There have been 'complaints' about Mathcad 15 still being programmed in DotNet 3-something. (Fortunately it's programmed in C, probably C++, hence its speed w.r.t. Prime which is probably mostly done in C#.)

Whether it's a 16-, 32- or 64-bit application, whether it's programmed in C, Pascal, DotNet, Basic or APL: it does (and should) NOT make a difference in the accuracy of any answers produced.

I just want the application to do its job, accurately and timely.

"You can’t expect ptc to give away all functions for free."

I don't. Mathcad had its free 'Browser' for a number of versions. it would read and calculate existing sheets, you could change, recalculate and print, but you could not save the worksheet. Prime Express will read existing worksheets, and you can see saved results; but when you make a change in the wrong place (affecting a 'Premium' result) it throws errors; fortunately you can save the sheet. I like that better.

I respect the fact that for symbolics, solve blocks and programming you'd have to pay; and also for complicated functions. (Remember that for Mathcad 11...13 you had to separately buy modules for signal processing, data analysis, image processing, wavelets and solving&optimization. Mathcad 6 exists in standard and professional edition.) But to exclude the use of functions like mean and Re goes a bit too far in my opinion. Maybe, because they are often-used functions, PTC marked them as Premium to tease, to get users into buying the product. It's their right.

I'm just using what they give me access to.

The big problem with Prime and PTC lies in the fact that development of a great product (Mathcad) has come to a stand-still. There's only one single feature of Prime I can think of that stands out: mixed units in vectors and matrices. Auto-labelling comes second; there are good and bad sides about it. (And you get both features for free with Prime Express.) Other than that there is (in my humble opinion) absolutely no reason to buy Prime, until PTC demonstrates it takes up Prime development seriously.

Incidentally: I judge Mathcad 11, mainly due to its symbolic processor and lack of static unit checking, still the best of all in the 'mathcad' family. As far as I know it's 32-bit, and single-threaded.

I have been using MathCad since version 1.0; yes, that's right, I'm that old. I was given MathCad version 1.0 (for free) when I was an Engineering student at University; because of this free introduction, I became chemically addicted to MathCad & have been using it ever since. I have also introduced MathCad into many companies because of the chemical addiction I developed to MathCad at University (because it was a drug supplied free of charge); this was a very smart business model by the way.

I've only used the trial license of MathCad 5', but it is complete & total junk. I certainly would never consider paying for it; I've now uninstalled it. MathCad 5' is so bad, I feel like I have been assaulted quite frankly. If I could report the assault to the Police, I would. If I could call the Army, Navy, Air Force, Marines & French Foreign Legion to rescue me, I would. To be frank, I would put the entire PTC Leadership Team in prison, surrounded by very angry men whom have just finished a MathCad 5' session.

The problem is not the people whom build MathCad 5', the problem is the PTC Leadership Team for getting this product so wrong in every way. I can very clearly see that, whomever is running this part of the business, is paid far too much money & should not be in the job.

Unfortunately, when dealing with computational engines, ALL defects are Severity One because from the perspective of a User, the code is spaghetti. This means that ANY computational defect from a User's point of view is catastrophic as it means that the User can't trust the product; life & livelihood may depend on how MathCad performs, especially when you run a small Engineering Business like I do.

PTC needs to dust-off v11, make some enhancements & re-badge it as MathCad 6'.

Although I totally agree with your post, it surprises me that We "spaghetti" .... are we catastrophic?!?!? It would be time to update your opinion.

Although I totally agree with your post, it surprises me that We "spaghetti" .... are we catastrophic?!?!? It would be time to update your opinion.

I am pretty sure that @Zordan didn't want to offend anyone.

"Spaghetti code" is a well known phrase for unstructured and hard to maintain source code in programming, resulting in failure-prone programs. It has nothing to do with Chinese (they invented the pasta) or Italian (they spread and captured them) people. A plate of spaghetti just looks quite unstructured and it is difficult to see where a noodle is going and similar applies to badly written program code.

I just looked up the expression in Wikipedia and was surprised to learn that there are also Ravioli-Code, Lasagna-Code (shouldn't it be Lasagne?) and Pizza-Code. Never heard of them before.

But I was not offended, I considered it a joke, which only made me laugh. I was surprised, however, by the reference to something Italian.

It's now one year later. In the past year I've not taken much time to increase the number of supported functions. Only a few minor enhancements were made, and only one big difference: The file now opens with Prime 3 and higher (used to be Prime 4) to allow (licensed) users of Prime 3 and 3.1 to open it as well, in case they want to take a look.

For Prime express users, there should be no reason to withold upgrading to Prime 4 (Express).

Thank you for all of your work and your willingness to share!

Correction regarding errors when using units in the hist() and histogram() functions.

Attached is a Prime 3 file.