I am making a mathcad file where i want to see the influence of the traffic load on the structure. According to NEN-EN-1991-2 (Trafficloads on bridges)

The selfweight part is easy, cause it is depending on the chosen structure.

But the question is:

How to determine the Moment and Shear distribution in such a way that different load cases can show the influence to the (different) beam configurations.

Where the difficult part will be the freedom to apply different load combinations and different beam configurations.

I hope you have an idea what i want and that you are able to help me. 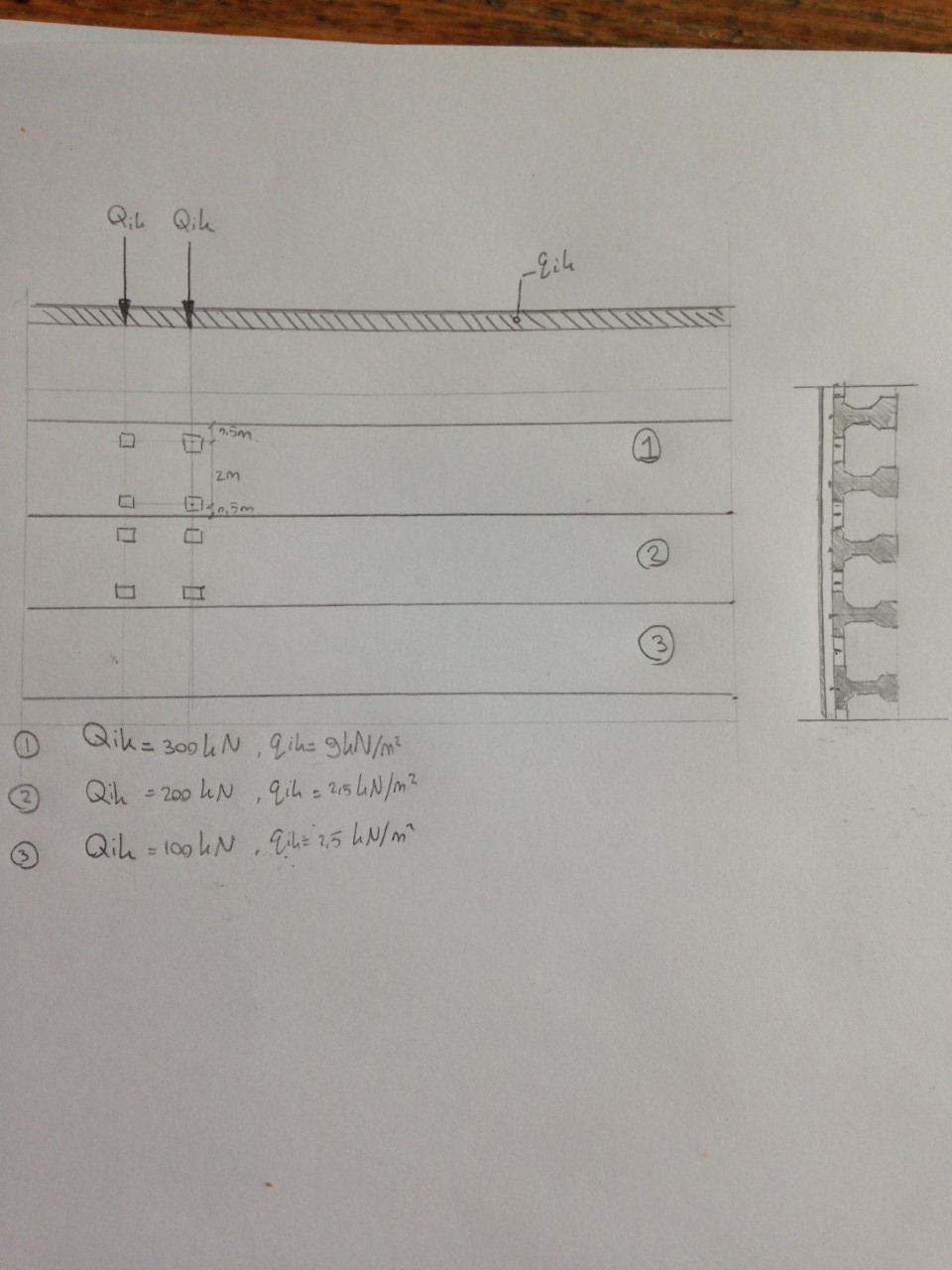 2 meters is little bit for trucks, and too much for people, and those loads seems to be some small, including cars. Also, charges are dynamic, not static: maybe a trailer want to brake sharply just in the bridge. So, probably others trailers want to do the same, just for no hit the first. Usually the case study is the worst, and hoping that the others can affect the structure integrity. What you ask, a more complete study, evaluating the design (and not just analyzing, this is the concept of engineering evaluation, analyze multiples designs), requires a big programming effort, to the point that exist specialized software to make this kind of analysis.

What you are trying to do is called 'distribution analysis'. In the old days, before we had computers bridge engineers used series solutions of the plate biharmonic such as the methods authored by Maurice & Little, or Hendry & Jeager.  Nowadays they use commercial software employing finite elements.  Back then, in about 1964, I had such a project but I was keen to use finite differences to solve the plate equation and did so programming the solution in ALGOL to run on an ICL mainframe. Over the years I have re-written this in various forms of BASIC and recently I have a version in Mathcad 14, a pdf of a typical runs is attached.  The abnormal vehicle load in Britain (HB load) consist of two bogies of two axles each with four wheels per axle, usually 45 units or 37.5 units, the units are Ton/axle.  On a two-lane carriageway this would be in combination with 1/3rd the standard highway loading (HA load) in the other lane.

The attached worksheet distributes the HA loads and the HB wheel loads to the rectangular finite difference grid, assembles a stiffness matrix from the finite difference form of the plate equation, adds the effects of any beams on any of the grid lines and the support stiffnesses.  The equations are solved to produce the deflexions at the nodes and the stress resulants are calculated from the relevant FD equations.  So it can be done with a Mathcad worksheet, but not quickly.